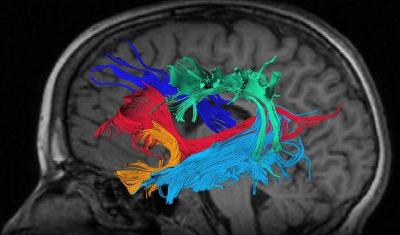 Highlighted areas are some of the white matter tracts the research group studied. Credited to University of Alberta.
Home
Featured

FASD Impacts Brain Development Throughout Childhood and Adolescence, Not Just at Birth

Medical researchers at the University of Alberta recently published findings showing that brain development is delayed throughout childhood and adolescence for people born with Fetal Alcohol Spectrum Disorder (FASD).

Christian Beaulieu and Carmen Rasmussen, the two primary investigators in the research study, recently published the results of their work in the peer-reviewed journal, The Journal of Neuroscience. Their team scanned 17 people with FASD, and 27 people without the disorder, who were between 5 and 15 years old. Each participant underwent two to three scans, with each scan taking place two to four years apart. This is the first research study involving multiple scans of the same FASD study participants.

Researchers used an advanced MRI method that examines white matter in the brain. White matter forms connections between various regions of the brain and usually develops significantly during childhood and adolescence. Those who took part in the study were imaged multiple times, to see what kinds of changes occurred in brain development as the participants aged. Those without the disorder had marked increases in brain volume and white matter – growth that was lacking in those with FASD. However, the advanced MRI method revealed greater changes in the brain wiring of white matter in the FASD group, which the authors suggest may reflect compensation for delays in development earlier in childhood.

“These findings may suggest that significant brain changes happened earlier in the study participants who didn’t have FASD,” says the study’s first author, Sarah Treit, who is a student in the Centre for Neuroscience at the U of A. “This study suggests alcohol-induced injury with FASD isn’t static – those with FASD have altered brain development, they aren’t developing at the same rate as those without the disorder. And our research showed those with FASD consistently scored lower on all cognitive measures in the study.”

Treit said the research team also made other important observations. Children with FASD who demonstrated the greatest changes in white matter development also made the greatest gains in reading ability – “so the connection seems relevant.” And those with the most severe FASD showed the greatest changes in white matter brain wiring. Scans also confirmed those with FASD have less overall brain volume – this issue neither rectified itself nor worsened throughout the course of the study.

A New Method to Predict Individual Risk of Cognitive Decline

Notes about this FASD and neurodevelopment research