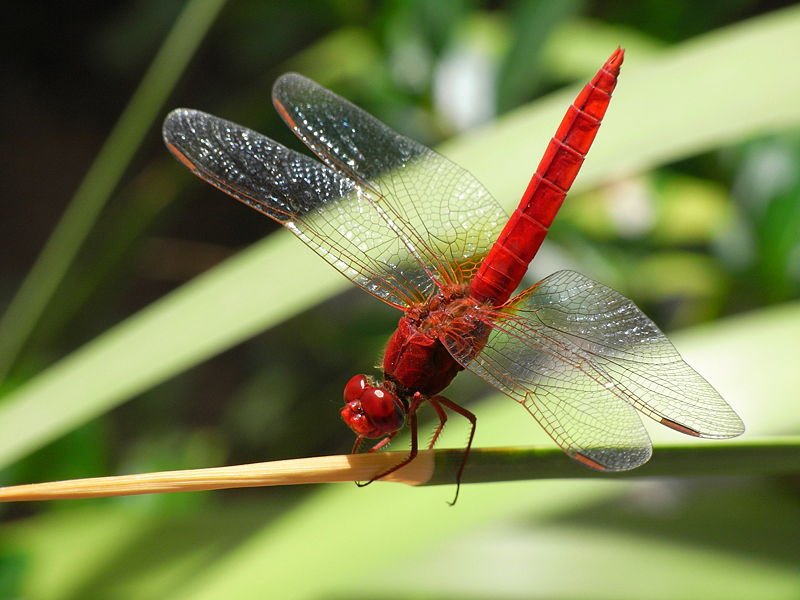 Dragonflies Can See by Switching “On” and “Off”

Researchers at the University of Adelaide have discovered a novel and complex visual circuit in a dragonfly’s brain that could one day help to improve vision systems for robots.

Dr Steven Wiederman and Associate Professor David O’Carroll from the University’s Centre for Neuroscience Research have been studying the underlying processes of insect vision and applying that knowledge in robotics and artificial vision systems.

Their latest discovery, published this month in The Journal of Neuroscience, is that the brains of dragonflies combine opposite pathways – both an ON and OFF switch – when processing information about simple dark objects.

“To perceive the edges of objects and changes in light or darkness, the brains of many animals, including insects, frogs, and even humans, use two independent pathways, known as ON and OFF channels,” says lead author Dr Steven Wiederman.

“Most animals will use a combination of ON switches with other ON switches in the brain, or OFF and OFF, depending on the circumstances. But what we show occurring in the dragonfly’s brain is the combination of both OFF and ON switches. This happens in response to simple dark objects, likely to represent potential prey to this aerial predator.

“Although we’ve found this new visual circuit in the dragonfly, it’s possible that many other animals could also have this circuit for perceiving various objects,” Dr Wiederman says.

The researchers were able to record their results directly from ‘target-selective’ neurons in dragonflies’ brains. They presented the dragonflies with moving lights that changed in intensity, as well as both light and dark targets.

“We discovered that the responses to the dark targets were much greater than we expected, and that the dragonfly’s ability to respond to a dark moving target is from the correlation of opposite contrast pathways: OFF with ON,” Dr Wiederman says.

“The exact mechanisms that occur in the brain for this to happen are of great interest in visual neurosciences generally, as well as for solving engineering applications in target detection and tracking. Understanding how visual systems work can have a range of outcomes, such as in the development of neural prosthetics and improvements in robot vision.

Similarity Between Schizophrenia and Dementia Discovered for the First Time

“A project is now underway at the University of Adelaide to translate much of the research we’ve conducted into a robot, to see if it can emulate the dragonfly’s vision and movement. This project is well underway and once complete, watching our autonomous dragonfly robot will be very exciting,” he says.

Notes about this neuroscience and vision research

Contact: Dr. Steven Wiederman – University of Adelaide
Source: University of Adelaide press release
Image Source: The Crocothemis erythraea dragonfly image is credited to ejatgc at Wikimedia Commons and is in the public domain.
Video Source: The video “Dragonflies have human-like ‘selective attention'” is available on the University of Adelaide’s YouTube Page.
Original Research: Abstract for “Correlation between OFF and ON Channels Underlies Dark Target Selectivity in an Insect Visual System” by Steven D. Wiederman, Patrick A. Shoemaker, and David C. O’Carroll in Journal of Neuroscience. Published online August 7 2013 doi: 10.1523/​JNEUROSCI.1277-13.2013