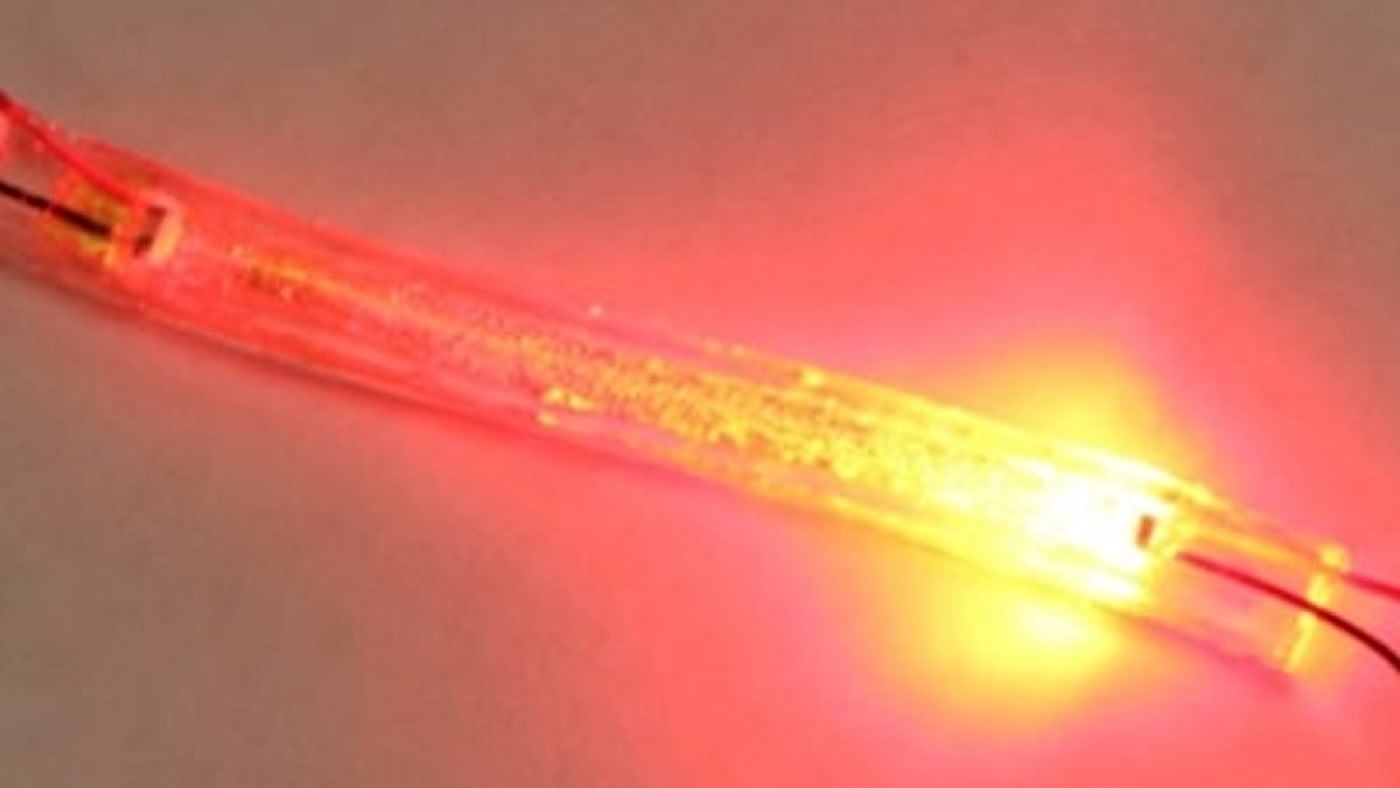 Optical sensors may be uniquely suited for use in robotic hands, according to Carnegie Mellon University researchers who have developed a three-fingered soft robotic hand with multiple embedded fiber optic sensors. They also have created a new type of stretchable optical sensor.

By using fiber optics, the researchers were able to embed 14 strain sensors into each of the fingers in the robotic hand, giving it the ability to determine where its fingertips are in contact and to detect forces of less than a tenth of a newton. The new stretchable optical sensing material, not incorporated in this version of the hand, potentially could be used in a soft robotic skin to provide even more feedback.

“If you want robots to work autonomously and to react safely to unexpected forces in everyday environments, you need robotic hands that have more sensors than is typical today,” said Yong-Lae Park, assistant professor of robotics. “Human skin contains thousands of tactile sensory units only in the fingertip and a spider has hundreds of mechanoreceptors on each leg, but even a state-of-the-art humanoid such as NASA’s Robonaut has only 42 sensors in its hand and wrist.”

Adding conventional pressure or force sensors is problematic because wiring can be complicated, prone to breaking and susceptible to interference from electric motors and other electromagnetic devices. But a single optical fiber can contain several sensors; all of the sensors in each of the fingers of the CMU hand are connected with four fibers, although, theoretically, a single fiber could do the job, Park said. And the optical sensors are impervious to electromagnetic interference.

The Carnegie Mellon researchers will discuss the robotic hand, developed together with researchers at Intelligent Fiber Optic Systems Corp., with support from NASA, Sept. 29 at the IEEE International Conference on Intelligent Robots and Systems, IROS 2015, in Hamburg, Germany. A report on the highly stretchable optical sensors will be presented Oct. 1 at the same conference.

“If you want robots to work autonomously and to react safely to unexpected forces in everyday environments, you need robotic hands that have more sensors than is typical today.” — Yong-Lae Park

Industrial robots, working in a controlled environment where people don’t venture, are capable of extremely precise manipulation with only limited sensors. But as roboticists at CMU and elsewhere work to develop soft robots that can interact routinely and safely with humans, increased attention to tactile and force sensing is essential, Park said.

Each of the fingers on the robotic hand mimic the skeletal structure of a human finger, with a fingertip, middle node and base node connected by joints. The skeletal “bones” are 3-D-printed hard plastic and incorporate eight sensors for detecting force. Each of the three sections is covered with a soft silicone rubber skin embedded with a total of six sensors that detect where contact has been made. A single active tendon works to bend the finger, while a passive elastic tendon provides opposing force to straighten the finger.

Despite their advantages, conventional optical sensors don’t stretch much – glass fibers stretch hardly at all and even polymer fibers stretch typically only 20-25 percent, Park noted. That is a limiting factor in a device such as a hand, where a wide range of motion is essential. Park has previously developed highly stretchable microfluidic soft sensors – membranes that measure strain via liquid-conductor-filled channels – but they are difficult to make and can cause a mess if the liquid leaks out.

So Park, working with mechanical engineering students Celeste To from CMU and Tess Lee Hellebrekers from the University of Texas, invented a highly stretchable and flexible optical sensor, using a combination of commercially available silicone rubbers. These soft waveguides are lined with reflective gold; as the silicone is stretched, cracks develop in the reflective layer, allowing light to escape. By measuring the loss of light, the researchers are able to calculate strain or other deformations.

Park said this type of flexible optical sensor could be incorporated into soft skins. Such a skin would not only be able to detect contact, as is the case with the soft components in the CMU hand, but also measure force.

Source: Byron Spice – Carnegie Mellon University
Image Source: The images are credited to The researchers/Carnegie Mellon University
Video Source: The videos are available at Yong-Lae Park’s YouTube page
Original Research: The research will be presented at the IEEE International Conference on Intelligent Robots and Systems, IROS 2015, in Hamburg, Germany.