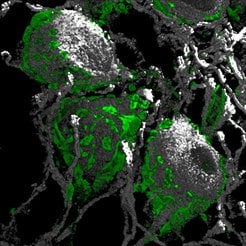 Sound localisation synapses (Calyx of Held) in the brainstem of a mouse. The green areas are synapses that release neurotransmitters. The receiving cells are grey. Credited to Benjamin H. Cooper, Max-Planck-Gesellschaft press release.
Home
Featured

A Turbocharger for Nerve Cells

Max Planck scientists in Göttingen have discovered a key mechanism that boosts the signalling function of neurons in the brain.

Locating a car that’s blowing its horn in heavy traffic, channel-hopping between football and a thriller on TV without losing the plot, and not forgetting the start of a sentence by the time we have read to the end – we consider all of these to be normal everyday functions. They enable us to react to fast-changing circumstances and to carry out even complex activities correctly. For this to work, the neuron circuits in our brain have to be very flexible. Scientists working under the leadership of neurobiologists Nils Brose and Erwin Neher at the Max Planck Institutes of Experimental Medicine and Biophysical Chemistry in Göttingen have now discovered an important molecular mechanism that turns neurons into true masters of adaptation.

Neurons communicate with each other by means of specialised cell-to-cell contacts called synapses. First, an emitting neuron is excited and discharges chemical messengers known as neurotransmitters. These signal molecules then reach the receiving cell and influence its activation state. The transmitter discharge process is highly complex and strongly regulated. Its protagonists are synaptic vesicles, small blisters surrounded by a membrane, which are loaded with neurotransmitters and release them by fusing with the cell membrane. In order to be able to respond to stimulation at any time by releasing transmitters, a neuron must have a certain amount of vesicles ready to go at each of its synapses. Brose has been studying the molecular foundations of this stockpiling for years.

The problem is not merely academic. “The number of immediately releasable vesicles at a synapse determines its reliability,” explains Brose. “If there are too few and they are replenished too slowly, the corresponding synapse becomes tired very quickly in conditions of repeated activation. The opposite applies when a synapse can quickly top up its immediately available vesicles under pressure. In fact, such a synapse may even improve with constant activation.”

This synaptic adaptability can be observed in practically all neurons. It is known as short-term plasticity and is indispensable for a large number of extremely important brain processes. Without it, we would not be able to localise sounds, mental maths would be impossible, and the speed and flexibility with which we can alter our behaviour and turn our attention to new goals would be lost.

Some years ago, Brose and his team discovered a protein with the cryptic name of Munc13. Not only is this protein indispensable for the replenishment of vesicles for immediate release at synapses; neuron activity regulates it in such a way that the fresh supply of vesicles can be adjusted in line with demand. This regulation occurs by means of a complex consisting of the signal protein calmodulin and calcium ions that build up in the synapses during intense neuron activity.

“Our earlier work on individual neurons in culture dishes showed that the calcium-calmodulin complex activates Munc13 and consequently ensures that immediately releasable vesicles are replenished faster,” says Noa Lipstein, an Israeli guest scientist in Brose’s lab. “But many colleagues were not convinced that this process also played a role in neurons in the intact brain.”

So Lipstein and her Japanese colleague Takeshi Sakaba created a mutant mouse with genetically altered Munc13 proteins that could not be activated by calcium-calmodulin complexes. The two neurophysiologists first studied the effects of this genetic manipulation on synapses involved in the localisation of sound, which are typically activated several hundred times every second. “Our study shows that the sustained efficiency of synapses in intact neuron networks is critically dependent on the activation of Munc13 by calcium-calmodulin complexes,” explains Lipstein.

The Göttingen-based scientists are convinced of the significance of their study. After all, leading neuroscientists of the past described the calcium sensor responsible for synaptic short-term plasticity and its target protein as the Holy Grail. “I am confident that we have discovered a key molecular mechanism of short-term plasticity that plays a role in all synapses in the brain, and not only in cultivated neurons, as many colleagues believed,” affirms Lipstein. And if she is, in fact, proved right about the interpretation of her findings, Munc13 could even be an ideal pharmacological target for drugs that influence brain function.

Notes about this neuroscience and short-term synaptic plasticity research