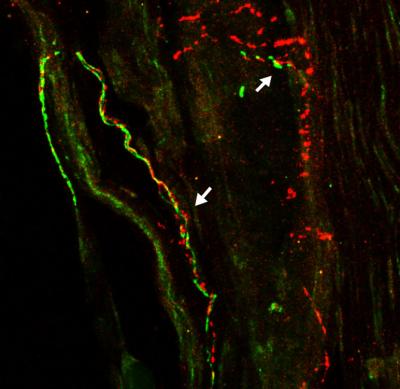 Sympathetic nerve fibers (depicted in red) are shown to wrap around the pain-sensing neurons (green) in the joint synovium of arthritic animals.Credited to Geraldine Longo, McGill University
Home
Featured

Study Points to Role of Nervous System in Arthritis

Reducing levels of nerve-growth factor may be a key to developing better pain treatments.

Arthritis is a debilitating disorder affecting one in 10 Canadians, with pain caused by inflammation and damage to joints.

Yet the condition is poorly managed in most patients, since adequate treatments are lacking – and the therapies that do exist to ease arthritis pain often cause serious side effects, particularly when used long-term. Any hope for developing more-effective treatments for arthritis relies on understanding the processes driving this condition.

A new study in the Journal of Neuroscience by researchers at McGill University adds to a growing body of evidence that the nervous system and nerve-growth factor (NGF) play a major role in arthritis. The findings also support the idea that reducing elevated levels of NGF – a protein that promotes the growth and survival of nerves, but also causes pain — may be an important strategy for developing treatment of arthritis pain.

Using an approach established by arthritis researchers elsewhere, the McGill scientists examined inflammatory arthritis in the ankle joint of rats. In particular, they investigated changes in the nerves and tissues around the arthritic joint, by using specific markers to label the different types of nerve fibres and allow them to be visualized with a fluorescence microscope.

Normally, sympathetic nerve fibres regulate blood flow in blood vessels. Following the onset of arthritis in the rats, however, these fibres began to sprout into the inflamed skin over the joint and wrap around the pain-sensing nerve fibres instead. More sympathetic fibres were detected in the arthritic joint tissues, as well.

The results also showed a higher level in the inflamed skin of NGF – mirroring the findings of human studies that have shown considerable increases in NGF levels in arthritis patients.

To investigate the role of these abnormal sympathetic fibres, the McGill researchers used an agent to block the fibres’ function. They found that this reduced pain-related behaviour in the animals.

“Our findings reinforce the idea that there is a neuropathic component to arthritis, and that sympathetic nerve fibres play a role in increasing the pain,” said McGill doctoral student Geraldine Longo, who co-authored the paper with Prof. Afredo Ribeiro-da-Silva and postdoctoral fellow Maria Osikowicz.

“We are currently using drugs to prevent the production of elevated levels of NGF in arthritic rats; we hope that our research will serve as a basis for the development of a new treatment for arthritis in the clinic”, said Prof. Ribeiro-da-Silva.

Notes about this neurology and arthritis research

This research was funded by grants from the Canadian Institutes of Health Research (CIHR), the Louise and Alan Edwards Foundation, and the MITACS-Accelerate Quebec program in partnership with Pfizer Canada.