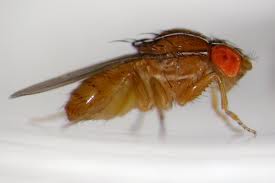 Experiments revealed that the feeding mechanism initiated by activating the transgenes was being controlled by a single pair of neurons in the fly's brain. The image shows a Drosophila fly.
Home
Featured

Scientists at the University of Massachusetts Medical School have developed a novel transgenic system which allows them to remotely activate individual brain cells in the model organism Drosophila using ambient temperature. This powerful new tool for identifying and characterizing neural circuitry has lead to the identification of a pair of neurons – now called Fdg neurons – in the fruit fly that decide when to eat and initiate the subsequent feeding action. Discovery of these neurons may help neurobiologists better understand how the brain uses memory and stimuli to produce classically conditioned responses, such as those often associated with phobias or drug tolerance. The study appears in the journal Nature.

“For any organism, the decision to eat is a complex integration of internal and external stimuli leading to the activation of an organized sequence of motor patterns,” said Motojiro Yoshihara, PhD, assistant professor of neurobiology at the University of Massachusetts Medical School and lead author of the Nature study. “By developing genetic tools to remotely activate individual brain cells in Drosophila, we’ve been able to isolate a pair of neurons that are critical to the act of eating in fruit flies. More importantly, we now have a powerful new tool with which we can answer important questions about the function and composition of neural circuitry.”

To isolate the neurons responsible for sensing food and initiating the complex feeding program in Drosophila, UMMS scientists had to develop a method of studying the behavior of freely moving flies while targeting and manipulating individual neurons. To accomplish this, Dr. Yoshihara expressed temperature activated genes in random neurons in more than 800 Drosophila lines. Placing these genetically modified flies in a small temperature-controlled chamber, he was able to active these genes by increasing and decreasing the ambient temperature. This, in turn, activated the corresponding neurons.

Under wild conditions, when a hungry fly comes in contact with food it ceases motion and executives eight basic motor functions resulting in the consumption of the food. When the temperature in the chamber was increased, Yoshihara and colleagues were able to isolate a single Drosophila line which exhibited these eight motor functions, even in the absence of food or other stimuli. Subsequent experiments revealed that the feeding mechanism initiated by activating the transgenes was being controlled by a single pair of neurons in the fly’s brain. Furthermore, these feeding (Fdg) neurons were responsible for synthesizing cues about available food and hunger, and using them to start the feeding mechanism.

“Our results showed that these neurons become active in the presence of a food source for the fly, but the response was contingent on whether the animal was hungry,” said Yoshihara. “This means that these neurons are integrating both internal and external stimuli in order to initiate a complex feeding behavior with multiple motor programs.”

Yoshihara believes this discovery will provide researchers with a powerful new tool for isolating, analyzing and characterizing aspects of the brain’s neural circuitry and studying how information is integrated in the brain. In the future, Yoshihara plans to use the Fdg-neurons to study the biological basis of classical or Pavlovian conditioning. Doing so, he hopes to uncover how memory integrates stimuli to illicit a conditioned behavior.

This work was supported by National Institute of Mental Health Grants MH85958, and the Worcester Foundation (to M.Y.), and the summer program of the Japan Society for the Promotion of Science/National Science Foundation (to T.F), and a Japan Science and Technology Agency CREST grant (to K.I.).