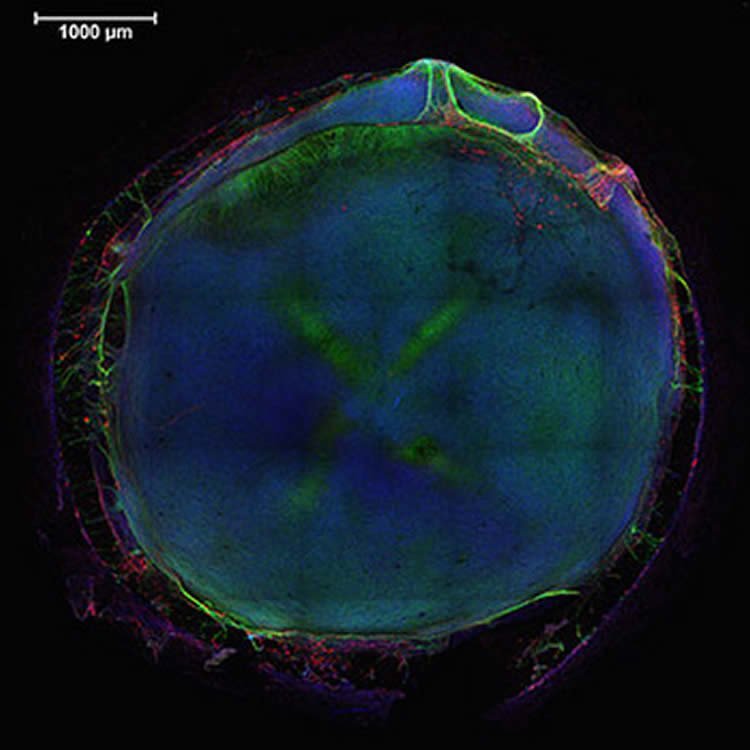 Inside wells about a fifth the size of a dime, the team grew neural tissues from a combination of cell types that represent the main components of a developing brain. This image shows the entire structure formed in the well, with nuclei in blue, neurons in green and glial cells in red. Credit Michael Schwartz.

A multidisciplinary team at the University of Wisconsin-Madison and the Morgridge Institute for Research is creating a faster, more affordable way to screen for neural toxins, helping flag chemicals that may harm human development.

The National Institutes of Health (NIH) announced today that the UW-Madison and Morgridge team is among 11 universities receiving support to continue the promising work as part of the Tissue Chip for Drug Screening program. The team will receive approximately $7 million over the three-year project.

The next phase of the NIH program aims to improve ways of predicting drug safety and effectiveness. Researchers will collaborate to refine existing 3-D human tissue chips and combine them into an integrated system that can mimic the complex functions of the human body.

“We aim to get more treatments to more patients more efficiently,” says Christopher P. Austin, director of the NIH’s National Center for Advancing Translational Sciences (NCATS). “That is exactly why we are supporting the development of human tissue chip technology, which could be revolutionary in providing a faster, more cost-effective way of predicting the failure or success of drugs prior to investing in human clinical trials.”

The UW-Madison team has succeeded in getting human pluripotent stem cell-derived neural progenitor cells to grow in a 3-D hydrogel environment. From there, the cells differentiate, self-organize, and mature into complex neural tissues. About one-fifth the circumference of a dime, the microenvironments assemble into three-dimensional tissue models that mimic the structure and function of the developing brain.\

In tandem with the biological work, the team is testing a machine-learning algorithm that can predict toxic responses to compounds added to these constructed environments. Early results on a 2-D system with 45 known toxins or control compounds produced 100 percent accuracy.

But the human health implications are even broader, says James Thomson, director of regenerative biology for Morgridge Institute and principal investigator on the project. Modern society is awash in chemicals, with millions of existing compounds and thousands of new ones added to regular use every year. Yet surprisingly little is known about the human development impact of these compounds, Thomson says.

“There is a tremendous need to come up with high-throughput methods to classify compounds quickly as dangerous or not dangerous,” Thomson says. “The vast majority of compounds today are not tested at all. We need to proactively identify the bad ones and test those intensively.”

The recent rise in neurological disorders such as autism, and recognition of the limitations of current screening efforts, further reinforce the need. Using animal models, this type of screening is frequently done in multi-generational studies with rats, which is time-consuming, of limited physiological relevance and costs more than $1 million per study, Thomson says.

“This type of screening method could have an impact on everything that comes in contact with the human body, including food, cosmetics, drugs, pesticides, and the thousands of molecules that bombard us every day,” Thomson says.

Murphy says the team has made “excellent progress” in just two years. “We’re seeing assemblies of human tissue that are really unprecedented,” says Murphy. “We have created vascularized human tissues that mimic some critical aspects of early brain development.”

The hydrogels developed by Murphy are critical to the model, as they provide a simple, synthetic environment that can be accurately controlled from experiment to experiment. Page’s work begins after the team develops the neural tissue in 24-well inserts and introduces different chemical compounds in each well, some at different time intervals to reflect different points in the cell development process.

In the first test done with 45 compounds — 29 known toxins and 16 control compounds known to be non-toxic — Page performs a type of holdout testing called cross-validation. He holds out one of the 45 compounds and trains on the other 44, working to see whether the computer can identify each holdout. The machine learning in this process was 100 percent accurate within 48 hours of the cells being exposed.

This test was done with two-dimensional samples, and a second test with 70 chemicals is currently being conducted with tissues from the 3-D environments.

Zhonggang Hou, an assistant scientist in the Thomson lab who oversees the project, says the team worked closely with the Environmental Protection Agency (EPA) to identify known neurotoxins that would be most suitable for early tests. “In the next three years, we would like to expand the list of chemicals for screening and automate the drug screening process, which we are now doing by hand,” he says.