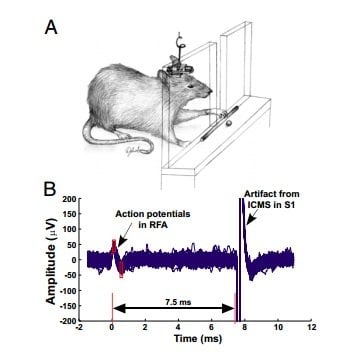 ADS protocol. After injury to the CFA, a recording microelectrode was placed in the RFA, whereas a stimulating microelectrode was placed in the distal forelimb field of S1. A BMIB discriminated action potentials in the RFA, and after a 7.5-ms delay, it delivered a low-level electrical current pulse to S1 (13). (A) Sketch of a rat retrieving a food pellet with a BMBI attached to the skull. (B) Sample traces of recordings from the RFA showing action potentials and stimulus artifacts from an ICMS current delivered to S1. Time-amplitude window discriminators are indicated by red boxes. A total of 100 superimposed traces are shown. Image and caption credited to Guggernmos et al/PNAS.
Home
Featured

Scientists from Case Western Reserve University and University of Kansas Medical Center have restored behavior—in this case, the ability to reach through a narrow opening and grasp food—using a neural prosthesis in a rat model of brain injury.

Ultimately, the team hopes to develop a device that rapidly and substantially improves function after brain injury in humans. There is no such commercial treatment for the 1.5 million Americans, including soldiers in Afghanistan and Iraq, who suffer traumatic brain injuries (TBI), or the nearly 800,000 stroke victims who suffer weakness or paralysis in the United States, annually.

The prosthesis, called a brain-machine-brain interface, is a closed-loop microelectronic system. It records signals from one part of the brain, processes them in real time, and then bridges the injury by stimulating a second part of the brain that had lost connectivity.

Their work is published online this week in the science journal Proceedings of the National Academy of Sciences.

“If you use the device to couple activity from one part of the brain to another, is it possible to induce recovery from TBI? That’s the core of this investigation,” said Pedram Mohseni, professor of electrical engineering and computer science at Case Western Reserve, who built the brain prosthesis.

“We found that, yes, it is possible to use a closed-loop neural prosthesis to facilitate repair of a brain injury,” he said.

The researchers tested the prosthesis in a rat model of brain injury in the laboratory of Randolph J. Nudo, professor of molecular and integrative physiology at the University of Kansas. Nudo mapped the rat’s brain and developed the model in which anterior and posterior parts of the brain that control the rat’s forelimbs are disconnected.

Atop each animal’s head, the brain-machine-brain interface is a microchip on a circuit board smaller than a quarter connected to microelectrodes implanted in the two brain regions.

The device amplifies signals, which are called neural action potentials and produced by the neurons in the anterior of the brain. An algorithm separates these signals, recorded as brain spike activity, from noise and other artifacts. With each spike detected, the microchip sends a pulse of electric current to stimulate neurons in the posterior part of the brain, artificially connecting the two brain regions.

Two weeks after the prosthesis had been implanted and run continuously, the rat models using the full closed-loop system had recovered nearly all function lost due to injury, successfully retrieving a food pellet close to 70 percent of the time, or as well as normal, uninjured rats. Rat models that received random stimuli from the device retrieved less than half the pellets and those that received no stimuli retrieved about a quarter of them.

“A question still to be answered is must the implant be left in place for life?” Mohseni said. “Or can it be removed after two months or six months, if and when new connections have been formed in the brain?”

Brain studies have shown that, during periods of growth, neurons that regularly communicate with each other develop and solidify connections.

Mohseni and Nudo said they need more systematic studies to determine what happens in the brain that leads to restoration of function. They also want to determine if there is an optimal time window after injury in which they must implant the device in order to restore function.

Notes about this neuroprosthesis and TBI research

Co-authors of the study include David J. Guggenmos, Scott Barbay and Caleb Dunham, of the department of molecular and integrative physiology, and Jonathan D. Mahnken, of the department of biostatistics, at Kansas University; and Meysam Azin, of QualComm, San Diego, who at the time was a Ph.D. student in Mohseni’s lab at Case Western Reserve’s electrical engineering and computer science department.

The work was funded by grants from the U.S. Army Medical Research and Materiel Command and the American Heart Association. The Advanced Platform Technology (APT) Center, a Veterans Affairs Research Center of Excellence in Cleveland supported the fabrication costs for the microchip in the prosthesis.