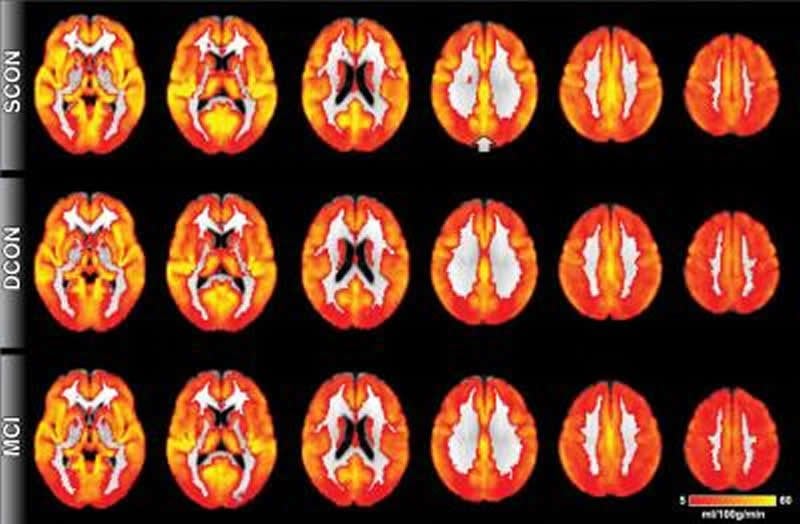 This image shows brain perfusion. Red indicates low perfusion, yellow indicates high perfusion. Overall, the brain perfusion is similar between all three groups. The most prominent difference is present in the posterior cingulate cortex (indicated by the arrow), a region close to the midline in the superior and posterior part of the brain. Control participants who remain stable have higher perfusion as compared to deteriorating controls and MCI. Credit RSNA.

A magnetic resonance imaging (MRI) technique can detect signs of cognitive decline in the brain even before symptoms appear, according to a new study published online in the journal Radiology. The technique has the potential to serve as a biomarker in very early diagnosis of preclinical dementia.

The World Health Organization estimates that dementia affects more than 35 million people worldwide, a number expected to more than double by 2030. Problems in the brain related to dementia, such as reduced blood flow, might be present for years but are not evident because of cognitive reserve, a phenomenon where other parts of the brain compensate for deficits in one area. Early detection of cognitive decline is critical, because treatments for Alzheimer’s disease, the most common type of dementia, are most effective in this early phase.

“ASL MRI is simple to perform, doesn’t require special equipment and only adds a few minutes to the exam,” said study author Sven Haller, M.D., from the University of Geneva in Geneva, Switzerland.

Of the 148 healthy individuals, 75 remained stable, while 73 deteriorated cognitively at 18 months clinical follow-up. Those who deteriorated had shown reduced perfusion at their baseline ASL MRI exams, particularly in the posterior cingulate cortex, an area in the middle of the brain that is associated with the default mode network, the neural network that is active when the brain is not concentrating on a specific task. Declines in this network are seen in MCI patients and are more pronounced in those with Alzheimer’s disease.

The pattern of reduced perfusion in the brains of healthy individuals who went on to develop cognitive deficits was similar to that of patients with MCI.

The results suggest that individuals with decreased perfusion detected with ASL MRI may temporarily maintain their cognitive status through the mobilization of their cognitive reserve, but will eventually develop subtle cognitive deficits.

Previous research done with positron emission tomography (PET), the current gold standard for brain metabolism imaging, found that patients with Alzheimer’s disease had reduced metabolism in the same area of the brain where the perfusion abnormalities were found using ASL MRI. This points to a close link between brain metabolism and perfusion, according to Dr. Haller.

ASL MRI has potential as a standalone test or as an adjunct to PET for dementia screening, Dr. Haller said. While PET can identify markers of Alzheimer’s disease in the brain and cerebrospinal fluid, it exposes the patient to radiation. ASL does not expose the patient to radiation and is easy to perform in routine clinical settings.

“ASL might replace the classic yet unspecific fluordesoxyglucose PET that measures brain metabolism. Instead, PET could be done with the new and specific amyloid PET tracers,” Dr. Haller said.

The results also support a role for ASL MRI as an alternative to neuropsychological testing.

The researchers plan to perform follow-up studies on the patient group to learn more about ASL and long-term cognitive changes.