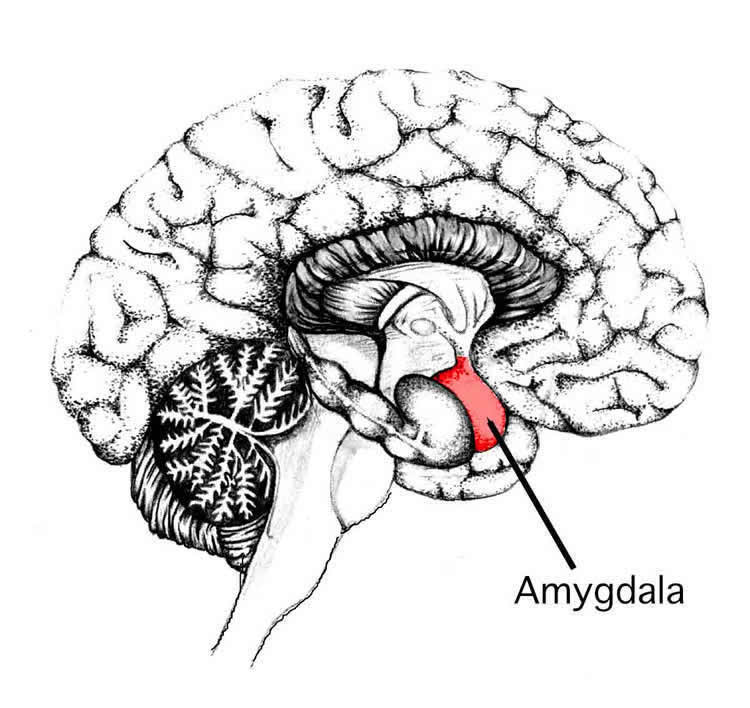 The amygdala is strongly linked to emotional processing, in particular fear-related emotions. So scientists asked about 60 subjects to make rapid decisions on emotional expressions in the lab environment while recording their breathing. Presented with pictures of faces showing expressions of either fear or surprise, the subjects had to indicate, as quickly as they could, which emotion each face was expressing. NeuroscienceNews.com image is for illustrtive purposes only.

Summary: A new study reports the rhythm of your breathing can influence neural activity that enhances memory recall and emotional judgement.

Breathing is not just for oxygen; it’s now linked to brain function and behavior.

Northwestern Medicine scientists have discovered for the first time that the rhythm of breathing creates electrical activity in the human brain that enhances emotional judgments and memory recall.

These effects on behavior depend critically on whether you inhale or exhale and whether you breathe through the nose or mouth.

“One of the major findings in this study is that there is a dramatic difference in brain activity in the amygdala and hippocampus during inhalation compared with exhalation,” said lead author Christina Zelano, assistant professor of neurology at Northwestern University Feinberg School of Medicine. “When you breathe in, we discovered you are stimulating neurons in the olfactory cortex, amygdala and hippocampus, all across the limbic system.”

The study was published Dec. 6 in the Journal of Neuroscience.

The senior author is Jay Gottfried, professor of neurology at Feinberg.

Northwestern scientists first discovered these differences in brain activity while studying seven patients with epilepsy who were scheduled for brain surgery. A week prior to surgery, a surgeon implanted electrodes into the patients’ brains in order to identify the origin of their seizures. This allowed scientists to acquire electro-physiological data directly from their brains. The recorded electrical signals showed brain activity fluctuated with breathing. The activity occurs in brain areas where emotions, memory and smells are processed.

This discovery led scientists to ask whether cognitive functions typically associated with these brain areas — in particular fear processing and memory — could also be affected by breathing.

The amygdala is strongly linked to emotional processing, in particular fear-related emotions. So scientists asked about 60 subjects to make rapid decisions on emotional expressions in the lab environment while recording their breathing. Presented with pictures of faces showing expressions of either fear or surprise, the subjects had to indicate, as quickly as they could, which emotion each face was expressing.

When faces were encountered during inhalation, subjects recognized them as fearful more quickly than when faces were encountered during exhalation. This was not true for faces expressing surprise. These effects diminished when subjects performed the same task while breathing through their mouths. Thus the effect was specific to fearful stimuli during nasal breathing only.

In an experiment aimed at assessing memory function — tied to the hippocampus — the same subjects were shown pictures of objects on a computer screen and told to remember them. Later, they were asked to recall those objects. Researchers found that recall was better if the images were encountered during inhalation.

The findings imply that rapid breathing may confer an advantage when someone is in a dangerous situation, Zelano said.

“If you are in a panic state, your breathing rhythm becomes faster,” Zelano said. “As a result you’ll spend proportionally more time inhaling than when in a calm state. Thus, our body’s innate response to fear with faster breathing could have a positive impact on brain function and result in faster response times to dangerous stimuli in the environment.”

Another potential insight of the research is on the basic mechanisms of meditation or focused breathing. “When you inhale, you are in a sense synchronizing brain oscillations across the limbic network,” Zelano noted.

Pressure Chamber Therapy Is Effective in the Functional Improvement of Autism

The need to breathe links the mammalian olfactory system inextricably to the respiratory rhythms that draw air through the nose. In rodents and other small animals, slow oscillations of local field potential activity are driven at the rate of breathing (∼2–12 Hz) in olfactory bulb and cortex, and faster oscillatory bursts are coupled to specific phases of the respiratory cycle. These dynamic rhythms are thought to regulate cortical excitability and coordinate network interactions, helping to shape olfactory coding, memory, and behavior. However, while respiratory oscillations are a ubiquitous hallmark of olfactory system function in animals, direct evidence for such patterns is lacking in humans. In this study, we acquired intracranial EEG data from rare patients (Ps) with medically refractory epilepsy, enabling us to test the hypothesis that cortical oscillatory activity would be entrained to the human respiratory cycle, albeit at the much slower rhythm of ∼0.16–0.33 Hz. Our results reveal that natural breathing synchronizes electrical activity in human piriform (olfactory) cortex, as well as in limbic-related brain areas, including amygdala and hippocampus. Notably, oscillatory power peaked during inspiration and dissipated when breathing was diverted from nose to mouth. Parallel behavioral experiments showed that breathing phase enhances fear discrimination and memory retrieval. Our findings provide a unique framework for understanding the pivotal role of nasal breathing in coordinating neuronal oscillations to support stimulus processing and behavior.

SIGNIFICANCE STATEMENT Animal studies have long shown that olfactory oscillatory activity emerges in line with the natural rhythm of breathing, even in the absence of an odor stimulus. Whether the breathing cycle induces cortical oscillations in the human brain is poorly understood. In this study, we collected intracranial EEG data from rare patients with medically intractable epilepsy, and found evidence for respiratory entrainment of local field potential activity in human piriform cortex, amygdala, and hippocampus. These effects diminished when breathing was diverted to the mouth, highlighting the importance of nasal airflow for generating respiratory oscillations. Finally, behavioral data in healthy subjects suggest that breathing phase systematically influences cognitive tasks related to amygdala and hippocampal functions.