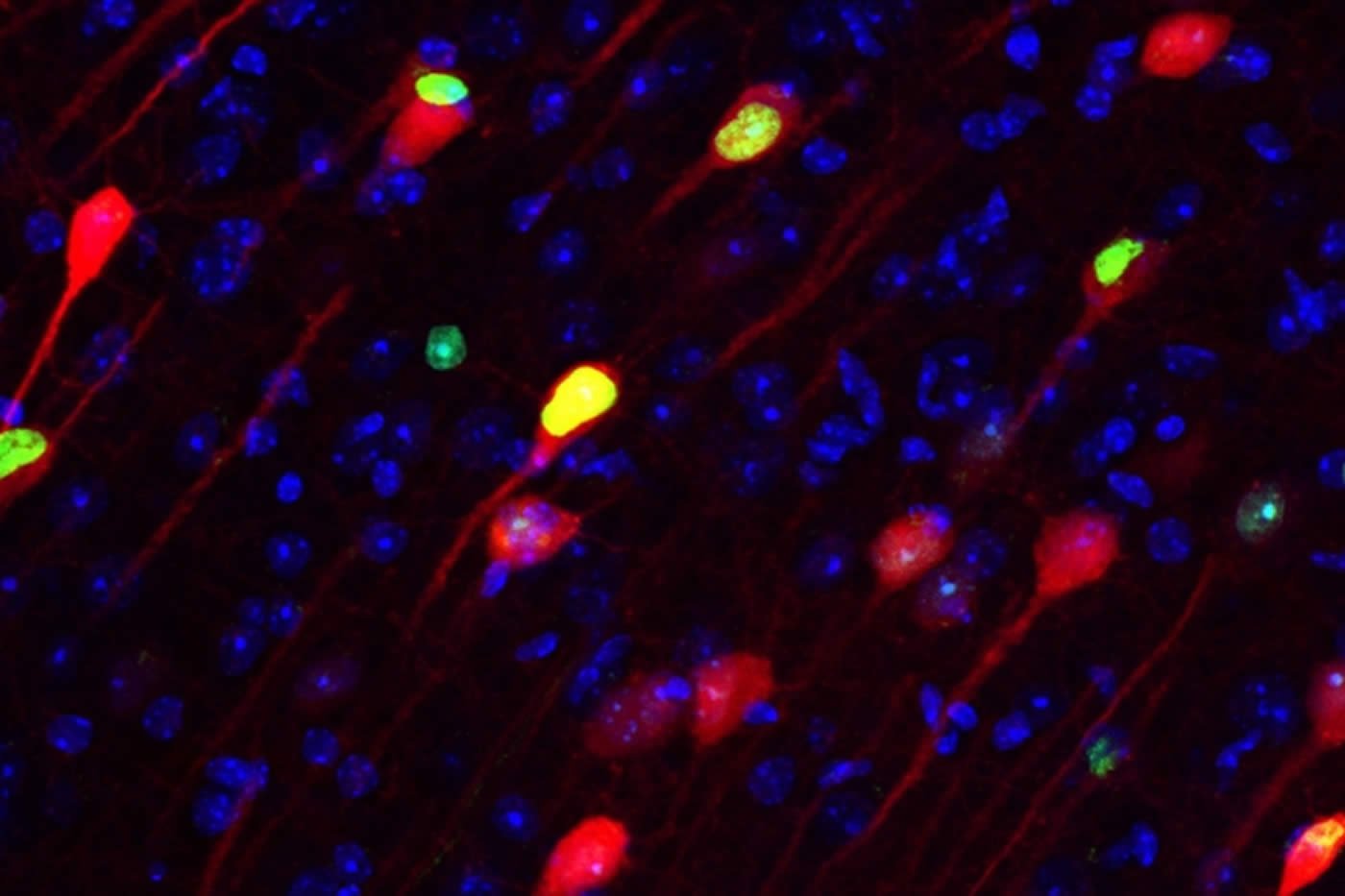 An MIT study of the neural circuits that underlie memory process reveals, for the first time, that memories are formed simultaneously in the hippocampus and the long-term storage location in the brain’s cortex. This image shows memory engram cells (green and red) which are crucial for permanent memory storage in the prefrontal cortex. NeuroscienceNews.com image is credited to Takashi Kitamura.

When we visit a friend or go to the beach, our brain stores a short-term memory of the experience in a part of the brain called the hippocampus. Those memories are later “consolidated” — that is, transferred to another part of the brain for longer-term storage.

A new MIT study of the neural circuits that underlie this process reveals, for the first time, that memories are actually formed simultaneously in the hippocampus and the long-term storage location in the brain’s cortex. However, the long-term memories remain “silent” for about two weeks before reaching a mature state.

“This and other findings in this paper provide a comprehensive circuit mechanism for consolidation of memory,” says Susumu Tonegawa, the Picower Professor of Biology and Neuroscience, the director of the RIKEN-MIT Center for Neural Circuit Genetics at the Picower Institute for Learning and Memory, and the study’s senior author.

The findings, which appear in Science on April 6, may force some revision of the dominant models of how memory consolidation occurs, the researchers say.

Beginning in the 1950s, studies of the famous amnesiac patient Henry Molaison, then known only as Patient H.M., revealed that the hippocampus is essential for forming new long-term memories.

Molaison, whose hippocampus was damaged during an operation meant to help control his epileptic seizures, was no longer able to store new memories after the operation. However, he could still access some memories that had been formed before the surgery.

This suggested that long-term episodic memories (memories of specific events) are stored outside the hippocampus. Scientists believe these memories are stored in the neocortex, the part of the brain also responsible for cognitive functions such as attention and planning.

A more recent model, the multiple trace model, suggests that traces of episodic memories remain in the hippocampus. These traces may store details of the memory, while the more general outlines are stored in the neocortex.

Until recently, there has been no good way to test these theories. Most previous studies of memory were based on analyzing how damage to certain brain areas affects memories. However, in 2012, Tonegawa’s lab developed a way to label cells called engram cells, which contain specific memories. This allows the researchers to trace the circuits involved in memory storage and retrieval. They can also artificially reactivate memories by using optogenetics, a technique that allows them to turn target cells on or off using light.

In the new Science study, the researchers used this approach to label memory cells in mice during a fear-conditioning event — that is, a mild electric shock delivered when the mouse is in a particular chamber. Then, they could use light to artificially reactivate these memory cells at different times and see if that reactivation provoked a behavioral response from the mice (freezing in place). The researchers could also determine which memory cells were active when the mice were placed in the chamber where the fear conditioning occurred, prompting them to naturally recall the memory.

The researchers labeled memory cells in three parts of the brain: the hippocampus, the prefrontal cortex, and the basolateral amygdala, which stores memories’ emotional associations.

Just one day after the fear-conditioning event, the researchers found that memories of the event were being stored in engram cells in both the hippocampus and the prefrontal cortex. However, the engram cells in the prefrontal cortex were “silent” — they could stimulate freezing behavior when artificially activated by light, but they did not fire during natural memory recall.

“Already the prefrontal cortex contained the specific memory information,” Kitamura says. “This is contrary to the standard theory of memory consolidation, which says that you gradually transfer the memories. The memory is already there.”

Over the next two weeks, the silent memory cells in the prefrontal cortex gradually matured, as reflected by changes in their anatomy and physiological activity, until the cells became necessary for the animals to naturally recall the event. By the end of the same period, the hippocampal engram cells became silent and were no longer needed for natural recall. However, traces of the memory remained: Reactivating those cells with light still prompted the animals to freeze.

In the basolateral amygdala, once memories were formed, the engram cells remained unchanged throughout the course of the experiment. Those cells, which are necessary to evoke the emotions linked with particular memories, communicate with engram cells in both the hippocampus and the prefrontal cortex.

The findings suggest that traditional theories of consolidation may not be accurate, because memories are formed rapidly and simultaneously in the prefrontal cortex and the hippocampus on the day of training.

“They’re formed in parallel but then they go different ways from there. The prefrontal cortex becomes stronger and the hippocampus becomes weaker,” Morrissey says.

Personality Traits Could Predict Those Prone to Prejudice

“This paper shows clearly that from the get-go, engrams are formed in the prefrontal cortex,” says Paul Frankland, a principal investigator in the Neurobiology Laboratory at the Hospital for Sick Children in Toronto, who was not involved in the study. “It challenges the notion that there’s a movement of the memory trace from the hippocampus to the cortex, and makes the point that these circuits are engaged together at the same time. As the memories age, there’s a shift in the balance of which circuit is engaged as a memory is recalled.”

Further studies are needed to determine whether memories fade completely from hippocampal cells or if some traces remain. Right now, the researchers can only monitor engram cells for about two weeks, but they are working on adapting their technology to work for a longer period.

Kitamura says he believes that some trace of memory may stay in the hippocampus indefinitely, storing details that are retrieved only occasionally. “To discriminate two similar episodes, this silent engram may reactivate and people can retrieve the detailed episodic memory, even at very remote time points,” he says.

The researchers also plan to further investigate how the prefrontal cortex engram maturation process occurs. This study already showed that communication between the prefrontal cortex and the hippocampus is critical, because blocking the circuit connecting those two regions prevented the cortical memory cells from maturing properly.

Engrams and circuits crucial for systems consolidation of a memory

Episodic memories initially require rapid synaptic plasticity within the hippocampus for their formation and are gradually consolidated in neocortical networks for permanent storage. However, the engrams and circuits that support neocortical memory consolidation have thus far been unknown. We found that neocortical prefrontal memory engram cells, which are critical for remote contextual fear memory, were rapidly generated during initial learning through inputs from both the hippocampal–entorhinal cortex network and the basolateral amygdala. After their generation, the prefrontal engram cells, with support from hippocampal memory engram cells, became functionally mature with time. Whereas hippocampal engram cells gradually became silent with time, engram cells in the basolateral amygdala, which were necessary for fear memory, were maintained. Our data provide new insights into the functional reorganization of engrams and circuits underlying systems consolidation of memory.