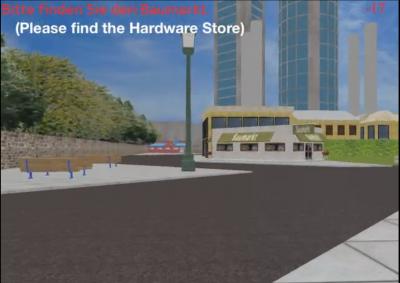 A still from the game participants played. They made deliveries to stores, then were asked to recall what they had delivered. Credited to University of Pennsylvania.
Home
Featured

Memories Are Geotagged with Spatial Information

Using a video game in which people navigate through a virtual town delivering objects to specific locations, a team of neuroscientists from the University of Pennsylvania and Freiburg University has discovered how brain cells that encode spatial information form “geotags” for specific memories and are activated immediately before those memories are recalled.

Their work shows how spatial information is incorporated into memories and why remembering an experience can quickly bring to mind other events that happened in the same place.

“These findings provide the first direct neural evidence for the idea that the human memory system tags memories with information about where and when they were formed and that the act of recall involves the reinstatement of these tags,” said Michael Kahana, professor of psychology in Penn’s School of Arts and Sciences.

Their study was published in the journal Science.

Kahana and his colleagues have long conducted research with epilepsy patients who have electrodes implanted in their brains as part of their treatment. The electrodes directly capture electrical activity from throughout the brain while the patients participate in experiments from their hospital beds.

As with earlier spatial memory experiments conducted by Kahana’s group, this study involved playing a simple video game on a bedside computer. The game in this experiment involved making deliveries to stores in a virtual city. The participants were first given a period where they were allowed to freely explore the city and learn the stores’ locations. When the game began, participants were only instructed where their next stop was, without being told what they were delivering. After they reached their destination, the game would reveal the item that had been delivered, and then give the participant their next stop.

After 13 deliveries, the screen went blank and participants were asked to remember and name as many of the items they had delivered in the order they came to mind.

This allowed the researchers to correlate the neural activation associated with the formation of spatial memories (the locations of the stores) and the recall of episodic memories: (the list of items that had been delivered).

“A challenge in studying memory in naturalistic settings is that we cannot create a realistic experience where the experimenter retains control over and can measure every aspect of what the participant does and sees. Virtual reality solves that problem,” Kahana said. “Having these patients play our games allows us to record every action they take in the game and to measure the responses of neurons both during spatial navigation and then later during verbal recall.”

By asking participants to recall the items they delivered instead of the stores they visited, the researchers could test whether their spatial memory systems were being activated even when episodic memories were being accessed. The map-like nature of the neurons associated with spatial memory made this comparison possible.

“During navigation, neurons in the hippocampus and neighboring regions can often represent the patient’s virtual location within the town, kind of like a brain GPS device,” Kahana said. “These so-called ‘place cells’ are perhaps the most striking example of a neuron that encodes an abstract cognitive representation.”

Using the brain recordings generated while the participants navigated the city, the researchers were able to develop a neural map that corresponded to the city’s layout. As participants passed by a particular store, the researchers correlated their spatial memory of that location with the pattern of place cell activation recorded. To avoid confounding the episodic memories of the items delivered with the spatial memory of a store’s location, the researchers excluded trips that were directly to or from that store when placing it on the neural map.

With maps of place cell activations in hand, the researchers were able to cross-reference each participant’s spatial memories as they accessed their episodic memories of the delivered items. The researchers found that the neurons associated with a particular region of the map activated immediately before a participant named the item that was delivered to a store in that region.

Can Neuroimaging Reveal the Roots of Psychiatric Disorders? Not Just Yet

“This means that if we were given just the place cell activations of a participant,” Kahana said, “we could predict, with better than chance accuracy, the item he or she was recalling. And while we cannot distinguish whether these spatial memories are actually helping the participants access their episodic memories or are just coming along for the ride, we’re seeing that this place cell activation plays a role in the memory retrieval processes.”

Earlier neuroscience research in both human and animal cognition had suggested the hippocampus has two distinct roles: the role of cartographer, tracking location information for spatial memory, and the role of scribe, recording events for episodic memory. This experiment provides further evidence that these roles are intertwined.

“Our finding that spontaneous recall of a memory activates its neural geotag suggests that spatial and episodic memory functions of the hippocampus are intimately related and may reflect a common functional architecture,” Kahana said.

The research was supported by the U.S. National Institutes of Health, the German Research Foundation and Germany’s Federal Ministry of Education and Research.