Using math to help treat Alzheimer’s, Parkinson’s and other diseases

Summary: Using control theory and the physics of protein aggregation, researchers created theoretical predictions on how and when to use drug interventions for neurodegenerative diseases.

Protein aggregation — in which misfolded proteins clump together to form large fibrils — has been implicated in many diseases including Alzheimer’s, Parkinson’s, and type II diabetes. While the exact role these fibrils play in diseases isn’t fully understood, many of the current treatments for diseases like Alzheimer’s and Parkinson’s target the aggregation process. However, finding the right treatment protocols for these drugs, which can be toxic in large doses, is challenging.

Recently, researchers from the Harvard John A. Paulson School of Engineering and Applied Sciences (SEAS) developed a model to better understand how drugs inhibit the growth of protein fibrils, offering a guide to develop more effective strategies to target protein aggregation diseases. The researchers found that different drugs target different stages of protein aggregation and the timing of their administration plays a critical role in inhibiting fibril growth.

“Our research highlights the importance of understanding the relationship between the chemical kinetics of protein misfolding, the mechanisms by which drugs inhibit protein aggregation, and the timing of their administration,” said L Mahadevan, the Lola England de Valpine Professor of Applied Mathematics, of Organismic and Evolutionary Biology, and of Physics at Harvard University. “This understanding could have important implications for intervention protocols to prevent pathological protein aggregation.”

Protein aggregation involves a number of steps, beginning with what’s called primary nucleation, in which the misfolded proteins join together to form a fibril, which then elongates. Once a critical number of fibrils is formed, aggregation accelerates due to a process known as secondary nucleation, leading to exponential growth. The first step associated with the formation of the fibrils is very slow, typically taking several decades, which could explain why Alzheimer’s often affects people in their old age. However, once those first fibrils are formed, the disease can progress very rapidly.

Using mathematical methods from control theory, combined with the physics of protein aggregation, the researchers made theoretical predictions on how and when to intervene using drugs.

To test their results, the researchers looked at previously published data on the efficacy of drugs in a model organism, the round worm, C. elegans, where one can trigger the formation of Amyloid b, a misfolded protein associated with Alzheimer’s disease. Its treatment is carried out using two compounds that inhibit the formation of Amyloid b: Bexarotene and DesAb29-35. 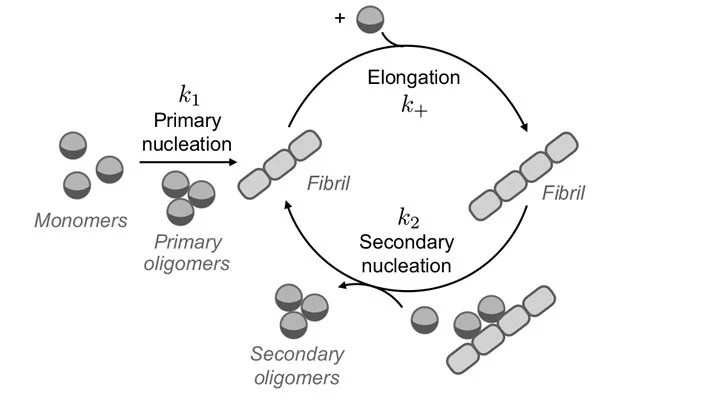 Protein aggregation involves a number of steps, beginning with what’s called primary nucleation, in which the misfolded proteins join together to form a fibril, which then elongates. The image is credited to L Mahadevan/Harvard SEAS.

In the absence of drugs, Amyloid-b aggregation causes paralysis in the worms. When Bexarotene was given at the onset of the disease in the larval stages, published data shows that there was a significant recovery of the worm’s mobility. The data also showed that DesAb29-36 was more effective when administered later in the disease’s progression.

“By combining well-known concepts from two different fields, the kinetics of protein aggregation, and optimal control theory, we linked molecular-scale phenomena to macroscale strategies with relevance for a real, practical problem,” said Mahadevan.

“Our approach, which draws on a detailed understanding of the aggregation process and uses this understanding to design rationally potential strategies, is unique,” said Thomas C. T. Michaels, a postdoctoral fellow at Harvard and co-first author of the study along with Christoph Weber, who was a postdoctoral fellow at Harvard and is now a junior group leader at the Max Planck Institute for Complex Physical Systems in Dresden, Germany. “It will allow people to test the efficacy of different compounds against aggregation under optimal conditions at the drug discovery and drug screening level. From these optimal conditions, one could then extrapolate optimal conditions for a trial. So, in this sense, our work could help seed potential trials.”

Funding: The research was published in the Proceedings of the National Academy of Sciences. It was supported by the Swiss National Science foundation and the German Research Foundation.

Protein aggregation has been implicated in many medical disorders, including Alzheimer’s and Parkinson’s diseases. Potential therapeutic strategies for these diseases propose the use of drugs to inhibit specific molecular events during the aggregation process. However, viable treatment protocols require balancing the efficacy of the drug with its toxicity, while accounting for the underlying events of aggregation and inhibition at the molecular level. To address this key problem, we combine here protein aggregation kinetics and control theory to determine optimal protocols that prevent protein aggregation via specific reaction pathways. We find that the optimal inhibition of primary and fibril-dependent secondary nucleation require fundamentally different drug administration protocols. We test the efficacy of our approach on experimental data for the aggregation of the amyloid-β(1-42) peptide of Alzheimer’s disease in the model organism Caenorhabditis elegans. Our results pose and answer the question of the link between the molecular basis of protein aggregation and optimal strategies for inhibiting it, opening up avenues for the design of rational therapies to control pathological protein aggregation.