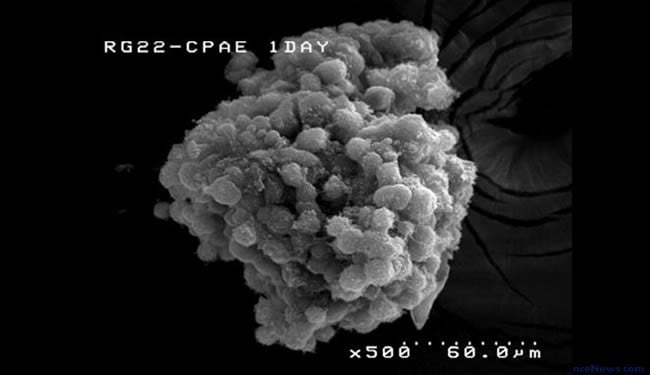 Researchers have created a living 3-D model of a brain tumor and its surrounding blood vessels. In experiments, the scientists report that iron-oxide nanoparticles carrying the agent tumstatin were taken by blood vessels, meaning they should block blood vessel growth. The living-tissue model could be used to test the effectiveness of nanoparticles in fighting other diseases. Results appear in Theranostics.

The researchers created a glioma, or brain tumor, and the network of blood vessels that surrounds it. In a series of experiments, the team showed that iron-oxide nanoparticles ferrying the chemical tumstatin penetrated the blood vessels that sustain the tumor with oxygen and nutrients. The iron-oxide nanoparticles are important, because they are readily taken up by endothelial cells and can be tracked by magnetic resonance imaging.

Previous experiments have shown that tumstatin was effective at blocking endothelial cell growth in gliomas. The tests by the Brown researchers took it to another level by confirming, in a 3-D, living environment, the iron-oxide nanoparticles’ ability to reach blood vessels surrounding a glioma as well as tumstatin’s ability to penetrate endothelial cells.

“The 3-D glioma model that we have developed offers a facile process to test diffusion and penetration into a glioma that is covered by a blood vessel-like coating of endothelial cells,” said Don Ho, a graduate student in the lab of chemistry professor Shouheng Sun and the lead author of the paper in the journal Theranostics. “This assay would save time and money, while reducing tests in living organisms, to examine an agent’s 3-D characteristics such as the ability for targeting and diffusion.”

The tissue model concept comes from Jeffrey Morgan, a bioengineer at Brown and a corresponding author on the paper. Building on that work, Ho and others created an agarose hydrogel mold in which rat RG2-cell gliomas roughly 200 microns in diameter formed. The team used endothelial cells derived from cow respiratory vessels, which congregated around the tumor and created the blood vessel architecture. The advantage of a 3-D model rather than Petri-dish-type analyses is that the endothelial cells attach to the tumor, rather than being separated from the substrate. This means the researchers can study their formation and growth, as well as the action of anti-therapeutic agents, just as they would in a living organism.

“You want to see nanoparticles that diffuse through the endothelial cells, which is lost in 2-D because you just have diffusion into media,” Ho said.

Other 3-D tissue models have been “forced cell arrangements,” Ho said. The 3-D glioma model, in contrast, allowed the glioma and the endothelial cells to assemble naturally, just as they would in real life. “It more clearly mimics what would actually happen,” Ho explained.

“This model has significant potential to help in the testing and optimization of the design of therapeutic/diagnostic nanocarriers and determine their therapeutic capabilities,” the researchers write.

Contributing authors include Nathan Kohler and Aruna Sigdel, in Brown’s chemistry department; Raghu Kalluri, from the Harvard Medical School, who first discovered tumstatin’s anti-blood vessel growth properties; and Chenjie Xu, who earned his doctorate in chemistry at Brown last May and is at Brigham and Women’s Hospital in Boston.

Morgan has an equity interest in MicroTissues Inc., which specializes in 3-D tissue products.