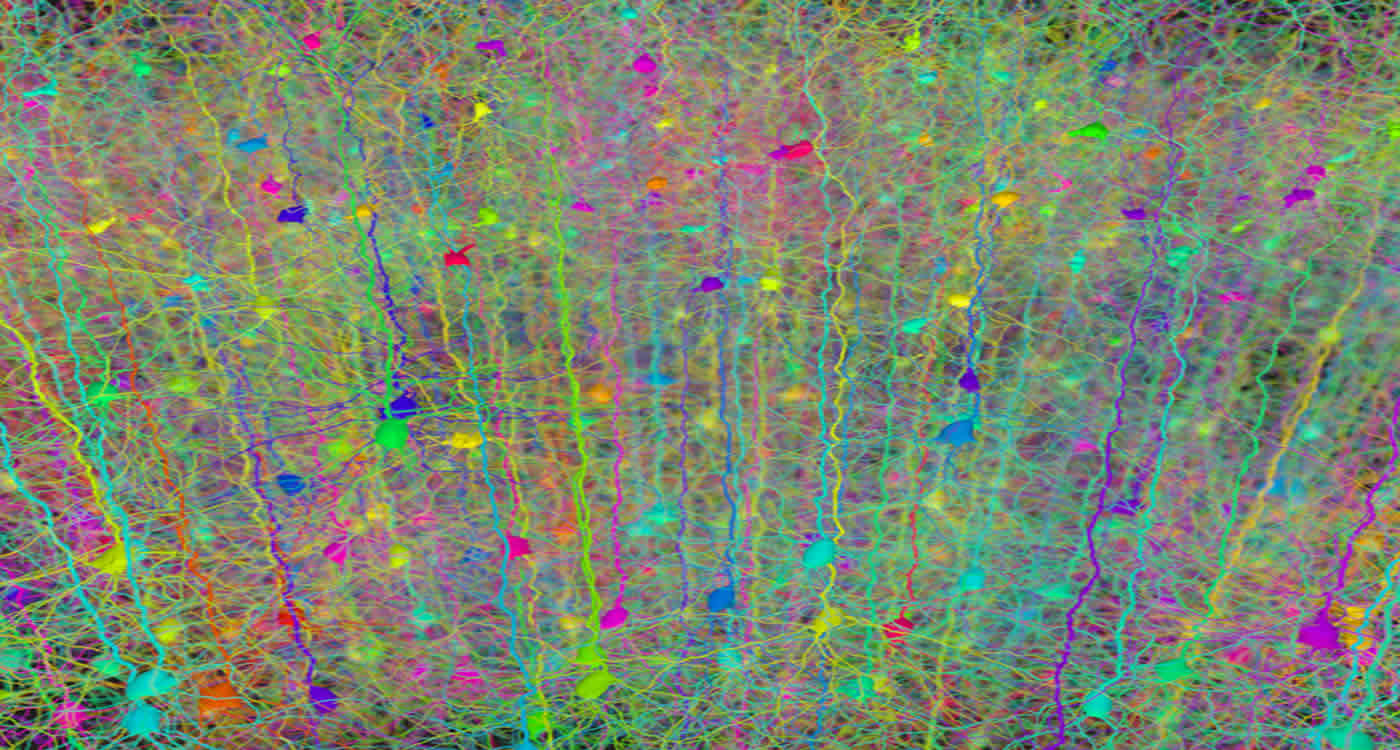 Among the study's key findings was that learning motor tasks such as running forward and backward induced completely separate patterns of lightning bolt-like activity in the dendrites of brain cells. The image is for illustrative purposes only and the caption reads "forest of synthetic pyramidal dendrites grown using Cajal's laws of neuronal branching." Image credit: Hermann Cuntz/PLOS Computational Biology.

Researchers at NYU Langone Medical Center have captured images of the underlying biological activity within brain cells and their tree-like extensions, or dendrites, in mice that show how their brains sort, store and make sense out of information during learning.

In a study to be published in the journal Nature online March 30, the NYU Langone neuroscientists tracked neuronal activity in dendritic nerve branches as the mice learned motor tasks such as how to run forward and backward on a small treadmill. They concluded that the generation of calcium ion spikes — which appeared in screen images as tiny “lightning bolts” in these dendrites — was tied to the strengthening or weakening of connections between neurons, hallmarks of learning new information.

“We believe our study provides important insights into how the brain deals with vast amounts of information continuously as the brain learns new tasks,” says senior study investigator and neuroscientist Wen-Biao Gan, PhD.

Gan, a professor at NYU Langone and its Skirball Institute for Biomolecular Medicine, says, “we have long wondered how the brain can store new information continuously throughout life without disrupting previously acquired memories. We now know that the generation of calcium spikes in separate branches of nerve cells is critical for the brain to encode and store large quantities of information without interfering with each other.”

Lead study investigator Joseph Cichon, a neuroscience doctoral candidate at NYU Langone, says their discoveries could have important implications for explaining the underlying neural circuit problems in disorders like autism and schizophrenia. Cichon says the team’s next steps are to see if calcium ion spikes are malfunctioning in animal models of these brain disorders.

Among the study’s key findings was that learning motor tasks such as running forward and backward induced completely separate patterns of lightning bolt-like activity in the dendrites of brain cells. These lightning bolts triggered a chain-like reaction, which changed the strength of connections between neurons.

How Neurons Find Their Place

The study also identified a unique cell type in the brain that controlled where the lightning bolts were generated. When these cells were turned off, lightning bolt patterns in the brain were disrupted, and as a result, the animal lost the information it had just learned.

About this learning research

Funding support for the study, which took four years to complete, was provided by National Institutes of Health grants RO1 NS047325 and P01 NS074972.