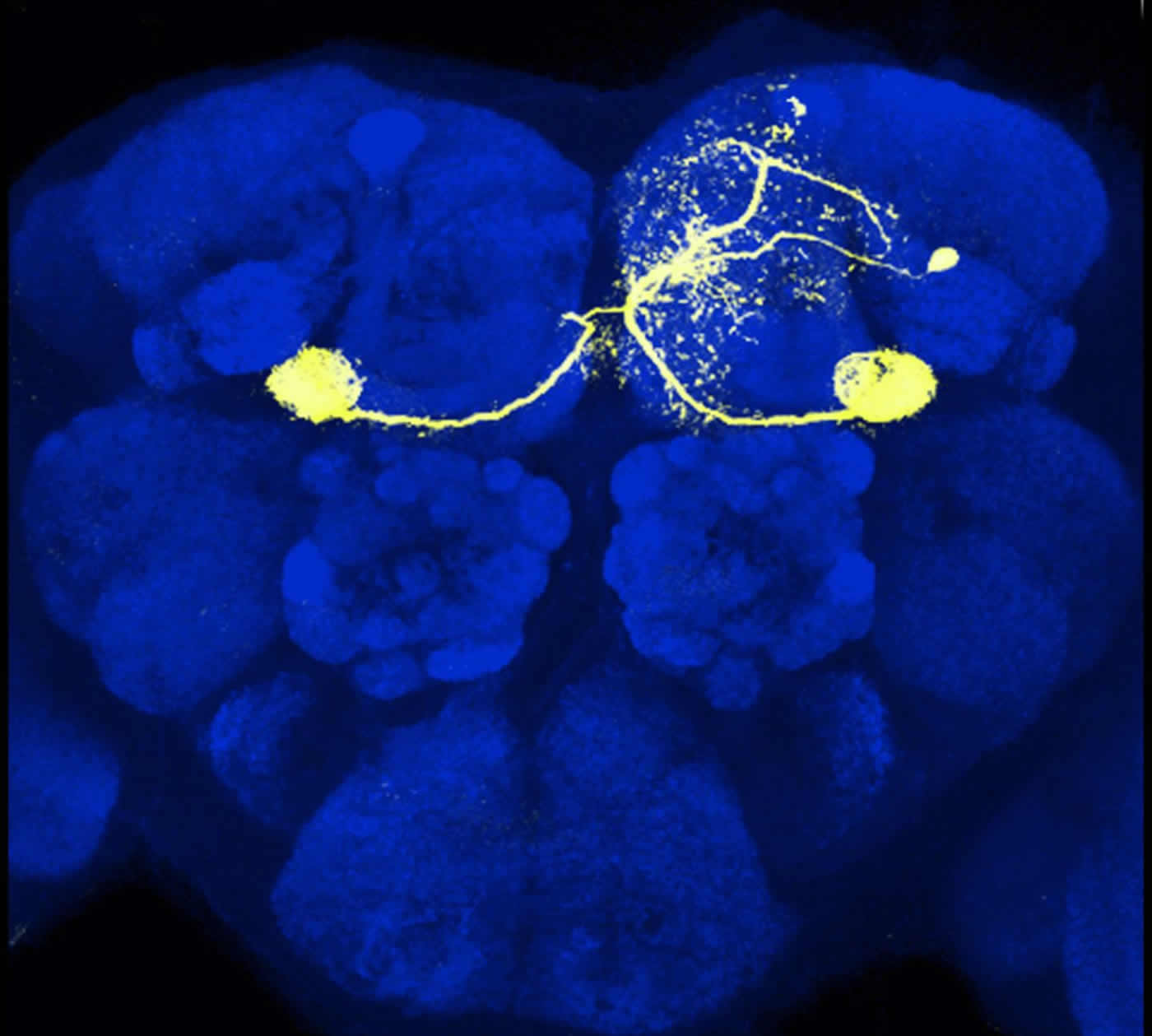 A singe dopamine neuron (yellow) in the mushroom body of the fruit fly Drosophila. Glenn Turner and colleagues trained flies to avoid certain odors by pairing them with stimulations of dopamine neurons signaling punishment. They found that this form of associative learning is driven by changes in synaptic strength between mushroom body neurons that process odors and downstream neurons that generate behavioral responses. Credit: Turner Lab, CSHL.

Scientists at Cold Spring Harbor Laboratory (CSHL) have resolved a decades-long debate about how the brain is modified when an animal learns.

Using newly developed tools for manipulating specific populations of neurons, the researchers have for the first time observed direct evidence of synaptic plasticity — changes in the strength of connections between neurons — in the fruit fly brain while flies are learning.

“We showed something that people have been hoping to see for a long time,” says the team leader, CSHL Associate Professor Glenn Turner, “and we showed it quite definitively.” The results appear online today in the journal Neuron.

Due to the relative simplicity of fruit fly neural anatomy — there are just two synapses separating odor-detecting antenna from an olfactory-memory brain center called the mushroom body — the diminutive insects have provided a powerful model organism for studying learning.

Historically, researchers have monitored neurons in the mushroom body, as well as others to which they send signals, using a technique called calcium imaging. This approach enabled previous researchers to observe changes in neural activity that accompany learning. However this technique doesn’t reveal precise how the electrical activity of the neurons is modified, since calcium is not the only ion involved in neuronal signaling.

Additionally, it was unclear how the changes that had been seen were related to the behavior of the animal.

Turner and colleagues at CSHL and the Howard Hughes Medical Institute’s Janelia Research Campus were able to zoom in to a particularly important part of the fly brain where they were able to connect neural activity to behavior. Toshihide Hige, the lead author of the paper, used his expertise in electrophysiological recordings to directly examine changes in synaptic strength at this site.

The researchers exposed fruit flies to a specific test odor and a very short time later subjected them to an artificial aversive cue. To do so they fired tiny beams of laser light at dopamine-releasing neurons in the mushroom body that were genetically engineered to become active in response to the light. Just like our own neurons, dopamine-releasing neurons in the fly are involved in reward and punishment.” Presenting the smell of cherries, for example, which is normally an attractive odor to flies, while at the same time stimulating a particular dopamine neuron, trains the fly to avoid cherry odor,” Turner explains.

In addition to the dopamine neurons, the team identified neurons that represented the test odor and neurons that represented the flies’ behavioral response to that odor. These neurons are connected to each other, while the dopamine neurons, which represent the punishment signal, modulate that connection. The team then made recordings of the neurons representing the behavior. This enabled them to discover any changes to the synaptic inputs those neurons received from the odor-representing neurons before and after learning.

Strikingly, the team found a dramatic reduction in the synaptic inputs upon subsequent presentations of the test odor, but not control odors. This drop reflected the decrease in the attractiveness of the odor that resulted from the learning. “The average drop in synaptic strength was around 80 percent — that’s huge,” says Turner.

In future studies, Turner plans to exploit powerful tools available for studying fruit fly genetics to better understand the genetic components of learning. “We now have a way of investigating synaptic changes with genetic tools to identify molecules involved in learning and really understand the phenomenon at a level that bridges molecular and physiological mechanisms,” he says.

“That mechanistic level of understanding is going to be really important,” he adds. “It’s often at the level of molecules that you see really strong connections between Drosophila and other species, including humans.”

About this neuroscience and learning research

Funding: The research described in the release was supported by the National Institutes of Health, the Howard Hughes Medical Institute, the Japan Society for the Promotion of Science, and the Uehara Memorial Foundation.

Although associative learning has been localized to specific brain areas in many animals, identifying the underlying synaptic processes in vivo has been difficult. Here, we provide the first demonstration of long-term synaptic plasticity at the output site of the Drosophila mushroom body. Pairing an odor with activation of specific dopamine neurons induces both learning and odor-specific synaptic depression. The plasticity induction strictly depends on the temporal order of the two stimuli, replicating the logical requirement for associative learning. Furthermore, we reveal that dopamine action is confined to and distinct across different anatomical compartments of the mushroom body lobes. Finally, we find that overlap between sparse representations of different odors defines both stimulus specificity of the plasticity and generalizability of associative memories across odors. Thus, the plasticity we find here not only manifests important features of associative learning but also provides general insights into how a sparse sensory code is read out.