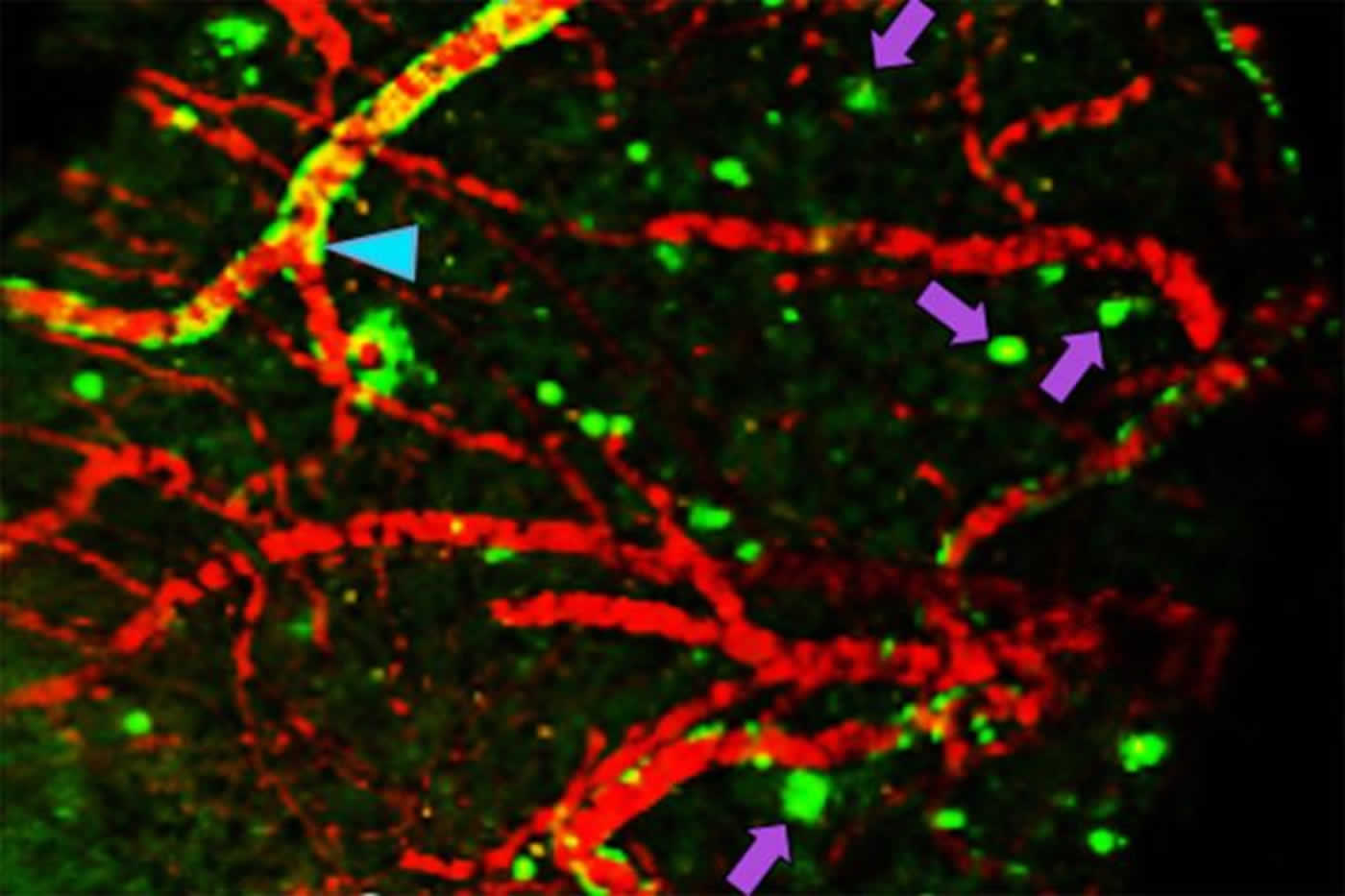 Researchers at Washington University School of Medicine in St. Louis have developed a chemical compound that detects the Alzheimer's protein amyloid beta better than current FDA-approved agents. The compound potentially may be used in brain scans to identify people in the earliest stages of Alzheimer's disease. In the image above, the compound has passed from the bloodstream of a living mouse into its brain, where it is detected by a positron emission tomography (PET) scan. Arrows indicate clumps of amyloid beta. NeuroscienceNews.com image is credited to Ping Yan and Jin-Moo Lee.

Earlier Alzheimer’s Diagnosis May Be Possible With New Imaging Compound

Summary: Researchers have developed a new imaging compound that can detect amyloid clumps more effectively than compounds currently in use.

By the time unambiguous signs of memory loss and cognitive decline appear in people with Alzheimer’s disease, their brains already are significantly damaged, dotted with clumps of a destructive protein known as amyloid beta. For years, scientists have sought methods and clues to help identify brain changes associated with Alzheimer’s earlier in the disease process, so they can try to stop or even reverse the changes before they severely affect people’s lives.

Now, researchers at Washington University School of Medicine in St. Louis have developed a chemical compound, named Fluselenamyl, that detects amyloid clumps better than current FDA-approved compounds. If a radioactive atom is incorporated into the compound, its location in a living brain can be monitored using positron emission tomography (PET) scans.

The compound, described in a paper published Nov. 2 in Scientific Reports, one of the Nature journals, potentially could be used in brain scans to identify the signs of early-stage Alzheimer’s disease or to monitor response to treatment.

“Fluselenamyl is both more sensitive and likely more specific than current agents,” said Vijay Sharma, PhD, a professor of radiology, of neurology and of biomedical engineering, and the study’s senior author. “Using this compound, I think we can reduce false negatives, potentially do a better job of identifying people in the earliest stages of Alzheimer’s disease and assess the effects of treatments.”

Amyloid plaques are one of the most telltale findings in the brains of people with Alzheimer’s disease. The neurons near such plaques are often dead or damaged, and this loss of brain cells is thought to account for difficulty with thinking, memory loss and confusion experienced by Alzheimer’s patients.

Amyloid plaques can be either diffuse or compact. The compact kind has long been associated with the disease, but conventional wisdom has held that diffuse plaques are benign, since they can be found in the brains of elderly people without any symptoms of Alzheimer’s disease, as well as the brains of those with Alzheimer’s. Sharma believes that diffuse plaques may mark the earliest stages of the disease.

“It is a relatively underexplored area in the development of Alzheimer’s pathology,” Sharma said. “Since current approved agents don’t detect diffuse plaques, there is no reliable noninvasive imaging tool to investigate this aspect in animal models or in patients. Our compound could be used to study the role of diffuse plaques.”

Using human amyloid beta proteins, Sharma and colleagues showed that Fluselenamyl bound to such proteins two to 10 times better than each of the three FDA-approved imaging agents for detecting amyloid beta. In other words, Fluselenamyl detected much smaller clumps of the protein, indicating that it may be able to detect the brain changes associated with Alzheimer’s disease earlier.

To determine whether Fluselenamyl can detect plaques in the brain, the researchers used the compound to stain brain slices from people who had died of Alzheimer’s disease and, as controls, people of similar ages who had died of other causes. The brain slices from the Alzheimer’s patients, but not the controls, were identified as containing plaques.

When a radioactive atom was incorporated into the compound, the researchers found very little interaction between Fluselenamyl and the healthy white matter in the human brain slices.

“A huge obstacle with existing state-of-the-art PET agents approved for plaque detection is that they tend to bind indiscriminately to the brain’s white matter, which creates false positives on the scans,” Sharma said. Nonspecific binding to other parts of the brain creates “noise,” which makes it difficult to distinguish samples with plaques from those without.

Furthermore, Sharma and colleagues showed that when Fluselenamyl with the radioactive atom is injected intravenously into mice, the compound can cross the blood-brain barrier, bind to any plaques in their brains and be detected by PET scan. In mice without plaques, the compound is quickly flushed from the brain and then excreted from the body.

The next step is to move to testing in patients. Sharma already has submitted an application to the National Institutes of Health (NIH) for a phase 0 trial, to establish whether Fluselenamyl is safe for use in humans and behaves in the human body the same way it behaves in mice. Phase 0 trials involve a low dose given to a small number of people to learn how a molecule is processed in the body and how it affects the body.

Mechanism Behind Loss of Smell With COVID-19 Revealed

“Ideally, we’d like to look at patients with very mild symptoms who are negative for Alzheimer’s by PET scan to see if we can identify them using Fluselenamyl,” Sharma said. “One day, we may be able to use Fluselenamyl as part of a screening test to identify segments of the population that are going to be at risk for development of Alzheimer’s disease. That’s the long-term goal.”

About this Alzheimer’s research article

Funding: The study was funded by National Institutes of Health, National Science Foundation.