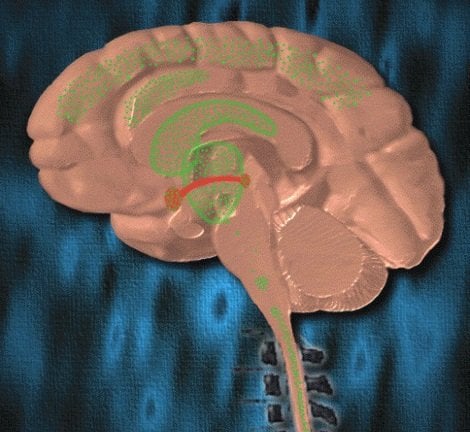 Researchers confirmed that the vaccine sequesters heroin and 6-acetylmorphine in the bloodstream, keeping it out of the brain. The image shows the localization of opiate binding sites within the brain and spinal cord.
Home
Featured

Scientists at The Scripps Research Institute (TSRI) have reported successful preclinical tests of a new vaccine against heroin. The vaccine targets heroin and its psychoactive breakdown products in the bloodstream, preventing them from reaching the brain.

“Heroin-addicted rats deprived of the drug will normally resume using it compulsively if they regain access, but our vaccine stops this from happening,” said George F. Koob, who chairs TSRI’s addiction research group, the Committee on the Neurobiology of Addictive Disorders. If the vaccine works as well in human trials, it could become a standard part of therapy for heroin addiction, which is estimated to affect more than 10 million people worldwide.

Koob, TSRI Professor Kim Janda, and their laboratories led the study, which appears during the week of May 6, 2013 in the Early Edition of the Proceedings of the National Academy of Sciences.

The heroin vaccine is one of several vaccines against drugs of abuse that have been developed since the 1990s by scientists at TSRI and other institutions.

The structures of common drug molecules are too small and simple to stimulate the immune system sufficiently on their own, but vaccine designers have overcome this hurdle by affixing key fragments of drug molecules to larger, more immune-provoking carrier proteins. Vaccines against cocaine and nicotine that have been designed this way are now in clinical testing, and a methamphetamine vaccine is nearing readiness for such tests.

Designing an effective vaccine against heroin has been particularly challenging because the drug breaks down rapidly in the bloodstream after injection. “Heroin is metabolized very quickly to another compound called 6-acetylmorphine, which crosses into the brain and accounts for much of heroin’s effect,” said Janda, who is TSRI’s Ely R. Callaway, Jr. Chair in Chemistry and whose laboratory initially developed the vaccine three years ago.

Janda and his team therefore designed the heroin vaccine to elicit antibodies against not only heroin, but also 6-acetylmorphine and morphine. “The vaccine effectively tracks the drug as it is metabolized, keeping the active breakdown products out of the brain, and that, I think, explains its success,” Janda said.

Initial tests, reported in 2011, showed the vaccine could block some of the acute effects of heroin, such as obstructing pain. In the new study, the Koob laboratory put the vaccine through more rigorous tests.

“We gave the vaccine to rats that had already been exposed to heroin, a situation obviously relevant to a human clinical situation,” said postdoctoral research associate Joel Schlosburg, who was first author of the study.

In one test, rats trained to press a lever three times to get an infusion of heroin later went through sessions of “extinction training,” in which lever presses no longer produced infusions. Among rats that had not received the heroin vaccine, a single infusion of heroin could immediately reinstate a rat’s drug-seeking lever-pressing behavior—just as human users relapse to drug-seeking after re-exposure to heroin. However, rats that had been vaccinated failed to resume their heroin-seeking lever-presses.

In an even more challenging test, rats that had become severely addicted to heroin and were taking it compulsively in escalating amounts—amounts that would have been lethal to drug-naïve rats—were forced to abstain for 30 days before being given renewed access. In rats that had received a dummy vaccine, intake resumed and they re-escalated, taking the drug compulsively. But in the heroin-vaccinated rats, intake failed to escalate and compulsive drug taking did not redevelop.

“Basically we were able to stop them from going through that cycle of taking more and more heroin,” said Schlosburg. “And that was with the vaccine alone; ideally for human patients, the vaccine would be given with other treatments.”

Keeping the Drug Out of the Brain

Body Chemistry Can Predict Severity of Depression After Death of Spouse

The researchers confirmed that the vaccine sequesters heroin and 6-acetylmorphine in the bloodstream, keeping it out of the brain. The vaccine did not block the effects of methadone, buprenorphine and other opioid-receptor-targeting drugs that are commonly used in addiction therapy. “It doesn’t affect the opioid system per se, so in principle you could give this vaccine to heroin-dependent people and continue to treat them with standard therapies, too,” Schlosburg said. “Opioid painkillers such as codeine or oxycodone also would continue to work.”

Janda notes that in some other trials of drug vaccines and therapies, rats have been known to compensate for the reduced drug effects by doubling or tripling their intake. “But with this heroin vaccine, they don’t try to load up more heroin to beat the vaccine—which is pretty impressive,” he said.

Janda expects to make minor changes to the heroin vaccine for trials in humans, but said, “We think it’s now about as good as it can be.” He is now actively seeking a pharmaceutical company partner to sponsor those clinical trials and, assuming that they go well, to eventually market the vaccine.

Notes about this neurobiology and addiction treatment research

Other contributors to the study, “Dynamic vaccine blocks relapse to compulsive intake of heroin,” were Leandro F. Vendruscolo, Carrie L. Wade and Scott Edwards of the Koob laboratory; and Paul T. Bremer, Jonathan W. Lockner, Ashlee A. Nunes and G. Neil Stowe of the Janda laboratory.

The study was funded in part by the Pearson Center for Alcoholism and Addiction Research at TSRI and by the National Institutes of Health (grants DA026625, DA004043 and AA007456).

The Human Immune System Is an Early Riser

How the Brain Navigates Cities

Neuroinflammation Protein Linked to Worse Survival in Men With Glioblastoma