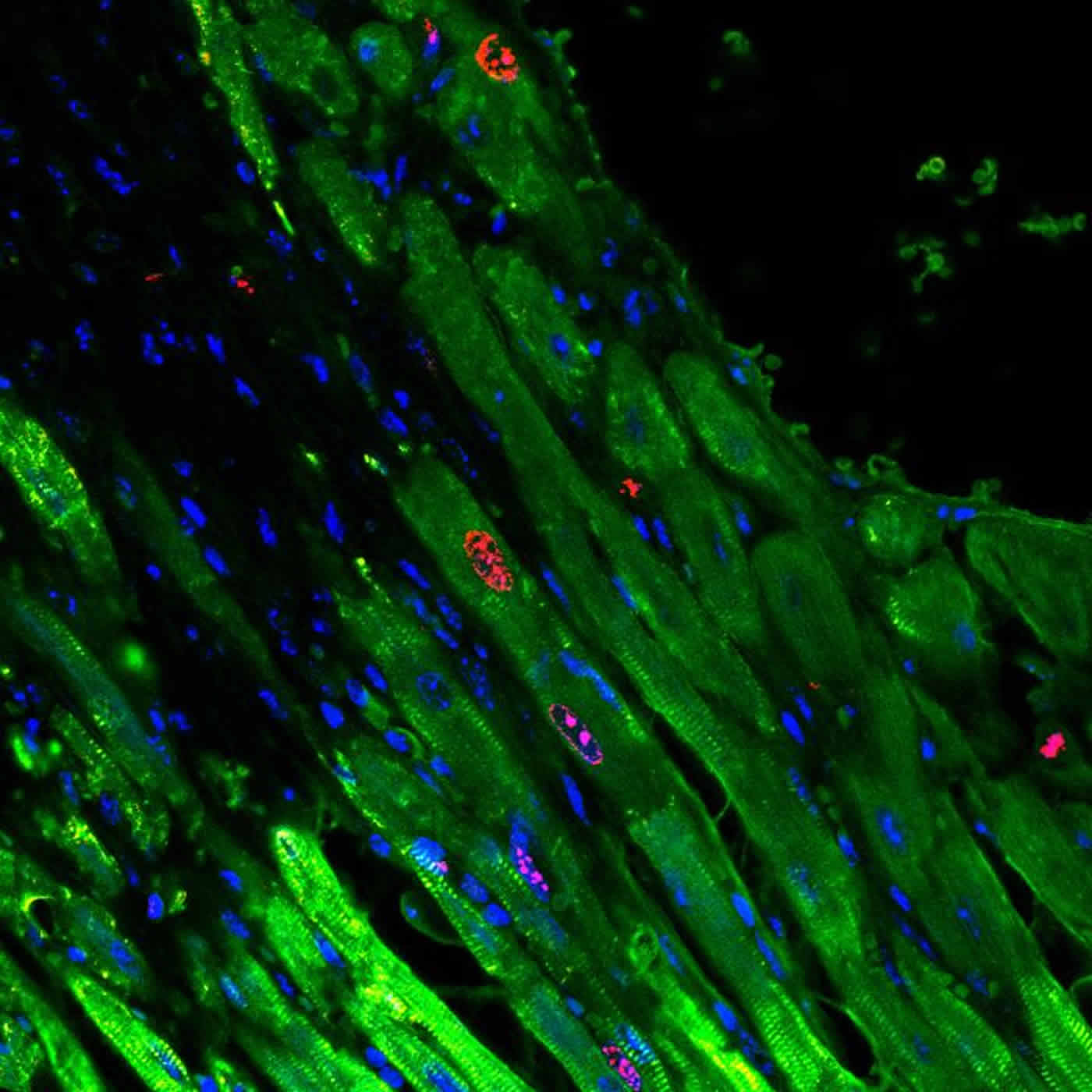 These are cardiomyocytes, green, proliferating in a mouse heart after gel injection. NeuroscienceNews.com image is credited to University of Pennsylvania.

In mammals, including humans, the cells that contract the heart muscle and enable it to beat do not regenerate after injury. After a heart attack, there is a dramatic loss of these heart muscle cells and those that survive cannot effectively replicate. With fewer of these contractile cells, known as cardiomyocytes, the heart pumps less blood with each beat, leading to the increased mortality associated with heart disease.

Now, researchers at the University of Pennsylvania’s School of Engineering and Applied Science and Perelman School of Medicine have used mouse models to demonstrate a new approach to restart replication in existing cardiomyocytes: an injectable gel that slowly releases short gene sequences known as microRNAs into the heart muscle.

Though the reasons cardiomyocytes don’t regenerate aren’t fully understood, the researchers used microRNAs that target signaling pathways related to cell proliferation, and were able to inhibit some of the inherent “stop” signals that keep cardiomyocytes from replicating. This resulted in cardiomyocytes reactivating their proliferative potential.

The study was led by Edward Morrisey, Professor in Medicine, member of the Cell and Molecular Biology graduate group and Scientific Director of the Penn Institute for Regenerative Medicine in Penn Medicine; Jason Burdick, Professor in Bioengineering in Penn Engineering; Leo Wang, a graduate student in Burdick’s lab; and Ying Liu, a postdoctoral researcher in Morrisey’s lab.

It was published in the journal Nature Biomedical Engineering.

MicroRNA-based therapies have been studied in the past, but delivering the right dose to the right place has been a consistent challenge.

“Biologic drugs turn over very fast,” Morrisey said. “The microRNAs that we used last less than eight hours in the bloodstream, so having a high local concentration has strong advantages.”

Their short lifespan means that if patients were treated systemically, they would need to be injected frequently with large doses to ensure that a sufficient amount of microRNAs reaches their target in the heart. And because these microRNAs are designed to promote cell proliferation, there would be a risk of tumor-producing, off-target effects.

The Morissey lab studies signaling pathways involved in heart and lung development and regeneration, while the Burdick lab has experience in designing biocompatible materials for drug delivery. The two groups collaborated to find the best way to get the microRNAs to the cardiomyocytes and have them persist long enough to be effective.

“We want to design the right material for a specific drug and application,” Burdick said. “The most important traits of this gel are that it’s shear-thinning and self-healing. Shear-thinning means it has bonds that can be broken under mechanical stress, making it more fluid and allowing it to flow through a syringe or catheter. Self-healing means that when that stress is removed, the gel’s bonds re-form, allowing it to stay in place within the heart muscle.”

“In addition to the bonds that give the gel its consistency,” Wang said, “the gel features attachment sites that keep the microRNAs in place. As the gel breaks down, it loses its grip on the microRNAs, which can slip out of the gel and into the cardiomyocytes.”

While encapsulated, the microRNAs are also protected from degradation, maximizing the time period that they can be effective without the risk of them invading off-target cells.

“There’s likely a time window that the cardiomyocytes are susceptible to this stimulus –maybe a week or two after injury,” Morrisey said. “We want to promote proliferation for a short period and then stop.”

To test their gel, the researchers used three types of mouse models.

The first group was normal, healthy mice. Within a few days after injecting the gel, their heart tissue showed increased biomarkers of cardiomyocyte proliferation.

The second group was “Confetti mice,” so called because they are genetically engineered such that they have individual cardiomyocytes that randomly express one of four different fluorescent proteins. These fluorescent labels allowed the researchers to see that individual cardiomyocytes were indeed dividing in response to the microRNA- gel treatment. After inducing heart attacks in the mice and introducing the microRNA-gel, the researchers could see that single red, yellow or green cardiomyocytes had become clusters, ranging from two to eight cells of the same color.

The third group was mice in which heart attacks were also induced so that clinically relevant outcomes of the treatment could be studied. These mice showed improved recovery as compared to controls, including higher ejection fraction — more blood pumped with each beat — and smaller increases in heart size. Enlarged hearts are a common consequence of heart attacks, with the expanded area composed of non-contractile scar tissue.

With promising results in mice, next steps for the researchers will involve testing human heart cells in vitro and conducting physiological experiments in animals with more human-like hearts, such as pigs.

More than a potentially life-prolonging treatment itself, the researchers see this microRNA-gel approach as representing a new, more direct avenue for precision regenerative medicine.

Math Neurons Identified in the Brain

“We’re seeing a change in approaches for regenerative medicine, using alternatives to stem cell delivery,” Burdick said. “Here, instead of introducing new cells that can have their own delivery challenges, we’re simply turning on repair mechanisms in cells that survive injury in the heart and other tissues.”

Funding: This work was made possible by financial support from the American Heart Association through an established investigator award to Burdick and a predoctoral fellowship to Wang, and the National Institutes of Health through grants F30 HL134255, UO1 HL100405 and U01 HL134745.

Note: Provisional patents concerning the technology described in this work have been filed.