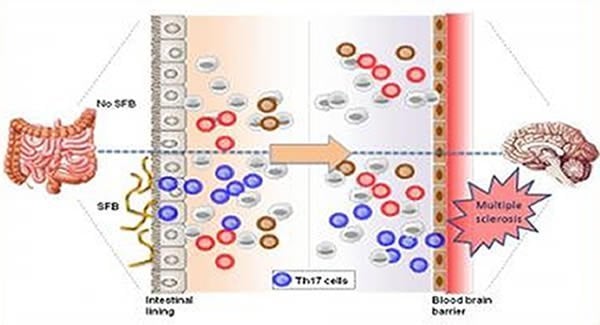 Biologists at the California Institute of Technology (Caltech) have demonstrated a connection between multiple sclerosis (MS)—an autoimmune disorder that affects the brain and spinal cord—and gut bacteria.

The work—led by Sarkis K. Mazmanian, an assistant professor of biology at Caltech, and postdoctoral scholar Yun Kyung Lee—appears online the week of July 19, in the Proceedings of the National Academy of Sciences.

Multiple sclerosis results from the progressive deterioration of the protective fatty myelin sheath surrounding nerve cells. The loss of myelin hinders nerve cells from communicating with one another, leading to a host of neurological symptoms including loss of sensation, muscle spasms and weakness, fatigue, and pain. Multiple sclerosis is estimated to affect about half a million people in the United States alone, with rates of diagnosis rapidly increasing. There is currently no cure for MS.

Although the cause of MS is unknown, microorganisms seem to play some sort of role. “In the literature from clinical studies, there are papers showing that microbes affect MS,” Mazmanian says. “For example, the disease gets worse after viral infections, and bacterial infections cause an increase in MS symptoms.”

On the other hand, he concedes, “it seems counterintuitive that a microbe would be involved in a disease of the central nervous system, because these are sterile tissues.”

And yet, as Mazmanian found when he began examining the multiple sclerosis literature, the suggestion of a link between bacteria and the disease is more than anecdotal. Notably, back in 1993, Caltech biochemist Leroy Hood—who was then at the University of Washington—published a paper describing a genetically engineered strain of mouse that developed a lab-induced form of multiple sclerosis known as experimental autoimmune encephalomyelitis, or EAE.

When Hood’s animals were housed at Caltech, they developed the disease. But, oddly, when the mice were shipped to a cleaner biotech facility—where their resident gut bacterial populations were reduced—they didn’t get sick. The question was, why? At the time, Mazmanian says, “the authors speculated that some environmental component was modulating MS in these animals.” Just what that environmental component was, however, remained a mystery for almost two decades.

But Mazmanian—whose laboratory examines the relationships between gut microbes, both harmful and helpful, and the immune systems of their mammalian hosts—had a hunch that intestinal bacteria were the key. “As we gained an appreciation for how profoundly the gut microbiota can affect the immune system, we decided to ask if symbiotic bacteria are the missing variable in these mice with MS,” he says.

To find out, Mazmanian and his colleagues tried to induce MS in animals that were completely devoid of the microbes that normally inhabit the digestive system. “Lo and behold, these sterile animals did not get sick,” he says.

Then the researchers decided to see what would happen if bacteria were reintroduced to the germ-free mice. But not just any bacteria. They inoculated mice with one specific organism, an unculturable bug from a group known as segmented filamentous bacteria. In prior studies, these bacteria had been shown to lead to intestinal inflammation and, more intriguingly, to induce in the gut the appearance of a particular immune-system cell known as Th17. Th17 cells are a type of T helper cell—cells that help activate and direct other immune system cells. Furthermore, Th17 cells induce the inflammatory cascade that leads to multiple sclerosis in animals.

“The question was, if this organism is inducing Th17 cells in the gut, will it be able to do so in the brain and central nervous system?” Mazmanian says. “Furthermore, with that one organism, can we restore to sterile animals the entire inflammatory response normally seen in animals with hundreds of species of gut bacteria?”

The answer? Yes on all counts. Giving the formerly germ-free mice a dose of one species of segmented filamentous bacteria induced Th17 not only in the gut but in the central nervous system and brain—and caused the formerly healthy mice to become ill with MS-like symptoms.

“It definitely shows that gut microbes have a strong role in MS, because the genetics of the animals were the same. In fact, everything was the same except for the presence of those otherwise benign bacteria, which are clearly playing a role in shaping the immune system,” Mazmanian says. “This study shows for the first time that specific intestinal bacteria have a significant role in affecting the nervous system during MS—and they do so from the gut, an anatomical location very, very far from the brain.”

Mazmanian and his colleagues don’t, however, suggest that gut bacteria are the direct cause of multiple sclerosis, which is known to be genetically linked. Rather, the bacteria may be helping to shape the immune system’s inflammatory response, thus creating conditions that could allow the disease to develop. Indeed, multiple sclerosis also has a strong environmental component; identical twins, who possess the same genome and share all of their genes, only have a 25 percent chance of sharing the disease. “We would like to suggest that gut bacteria may be the missing environmental component,” he says.

For their part, Th17 cells are needed for the immune system to properly combat infection. Problems only arise when the cells are activated in the absence of infection—just as disease can arise, Mazmanian and others suspect, when the species composition of gut bacteria become imbalanced, say, by changes in diet, because of improved hygiene (which kills off the beneficial bacteria as well as the dangerous ones), or because of stress or antibiotic use. One impact of the dysregulation of normal gut bacterial populations—a phenomenon dubbed “dysbiosis”—may be the rising rate of multiple sclerosis seen in recent years in more hygienic societies.

“As we live cleaner, we’re not just changing our exposure to infectious agents, but we’re changing our relationship with the entire microbial world, both around and inside us, and we may be altering the balance between pro- and anti-inflammatory bacteria,” leading to diseases like MS, Mazmanian says. “Perhaps treatments for diseases such as multiple sclerosis may someday include probiotic bacteria that can restore normal immune function in the gut… and the brain.”

###
The paper, “Pro-inflammatory T-cell responses to gut microbiota promote experimental autoimmune encephalomyelitis,” was also coauthored by former Caltech postdoctoral scholar Juscilene Menezes and Yoshinori Umesaki of the Yakult Central Institute for Microbiological Research in Japan. The work was supported by funding from the California Institute of Technology, the Weston Havens Foundation, and the Edward Mallinckrodt, Jr. Foundation.