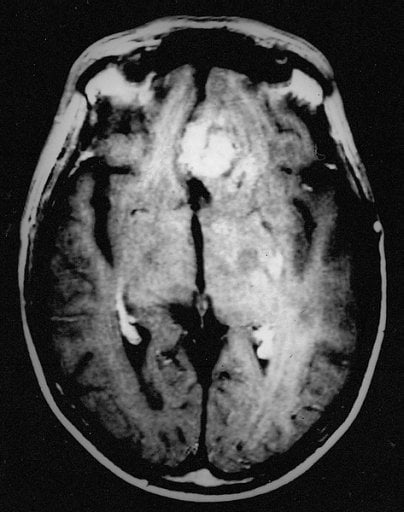 Research suggests a patient's own fat cells could be used to create cancer fighting cells. Patients with glioblastoma could have fatty tissue removed prior to surgery. The mesenchymal stem cells (MSCs) in the fat could be drawn out and manipulated to carry drugs or other treatments. These cells could then be deposited into the brain with the hope they would seek out and destroy any remaining cancer cells. The image shows a brain scan of a patient with recurrent glioblastoma.
Home
Brain Cancer

In laboratory studies, Johns Hopkins researchers say they have found that stem cells from a patient’s own fat may have the potential to deliver new treatments directly into the brain after the surgical removal of a glioblastoma, the most common and aggressive form of brain tumor.

The investigators say so-called mesenchymal stem cells (MSCs) have an unexplained ability to seek out damaged cells, such as those involved in cancer, and may provide clinicians a new tool for accessing difficult-to-reach parts of the brain where cancer cells can hide and proliferate anew. The researchers say harvesting MSCs from fat is less invasive and less expensive than getting them from bone marrow, a more commonly studied method.

Results of the Johns Hopkins proof-of-principle study are described online in the journal PLOS ONE.

“The biggest challenge in brain cancer is the migration of cancer cells. Even when we remove the tumor, some of the cells have already slipped away and are causing damage somewhere else,” says study leader Alfredo Quinones-Hinojosa, M.D., a professor of neurosurgery, oncology and neuroscience at the Johns Hopkins University School of Medicine. “Building off our findings, we may be able to find a way to arm a patient’s own healthy cells with the treatment needed to chase down those cancer cells and destroy them. It’s truly personalized medicine.”

For their test-tube experiments, Quinones-Hinojosa and his colleagues bought human MSCs derived from both fat and bone marrow, and also isolated and grew their own stem cell lines from fat removed from two patients. Comparing the three cell lines, they discovered that all proliferated, migrated, stayed alive and kept their potential as stem cells equally well.

This was an important finding, Quinones-Hinojosa says, because it suggests that a patient’s own fat cells might work as well as any to create cancer-fighting cells. The MSCs, with their ability to home in on cancer cells, might be able to act as a delivery mechanism, bringing drugs, nanoparticles or some other treatment directly to the cells. Quinones-Hinojosa cautions that while further studies are under way, it will be years before human trials of MSC delivery systems can begin.

Ideally, he says, if MSCs work, a patient with a glioblastoma would have some adipose tissue (fat) removed, from any number of locations in the body, a short time before surgery. The MSCs in the fat would be drawn out and manipulated in the lab to carry drugs or other treatments. Then, after surgeons removed the brain tumor, they could deposit these treatment-armed cells into the brain in the hopes that they would seek out and destroy the cancer cells.

Currently, standard treatments for glioblastoma are chemotherapy, radiation and surgery, but even a combination of all three rarely leads to more than 18 months of survival after diagnosis. Glioblastoma tumor cells are particularly nimble, migrating across the entire brain and establishing new tumors. This migratory capability is thought to be a key reason for the low cure rate of this tumor type.

“Essentially these MSCs are like a ‘smart’ device that can track cancer cells,” Quinones-Hinojosa says.

Quinones-Hinojosa says it’s unclear why MSCs are attracted to glioblastoma cells, but they appear to have a natural affinity for sites of damage in the body, such as a wound. MSCs, whether derived from bone marrow or fat, have been studied in animal models to treat trauma, Parkinson’s disease, ALS and other diseases.