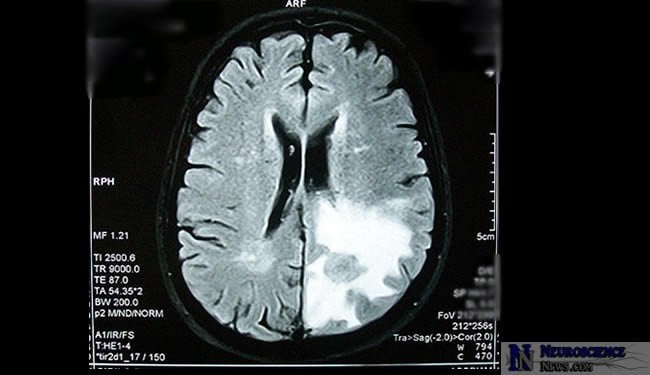 Genetic Mutations in Brain Tumors Could Turn Out Useful

One such metabolite is the very common brain metabolite,  N-acetyl-aspartyl-glutamate, or NAAG. Concentration levels of NAAG were 50 times less in cells with IDH1 defective genes.

Armed with this research, scientists may be able to improve identification and targeting of brain tumors and move closer toward controlling tumor growth by manipulating cellular metabolism with genetics. These advances could in turn lead to much more effective brain tumor drugs and treatment.

Scientists at Duke Cancer Institute have discovered that genetic mutations found in brain tumors can alter tumor metabolism. This work could help lead to new designs for anti-cancer drugs based on the unique properties of these tumors.

“Malignant glioma appears to be at least two large subclasses of diseases – one that involves mutations in the IDH1 and IDH2 genes and one that doesn’t,” saidHai Yan, MD, PhD, an associate professor in the Duke Department of Pathologywho led a collaborative group of researchers to conduct the study.

“The IDH mutation can serve as a biomarker to help single out individuals who are likely to have better outcomes and who might then receive a particular type of treatment based on their tumor IDH mutation status.”

“What we and other researchers are learning now is that certain changes in cellular metabolism are probably a hallmark of cancer,” said Yan, who works in thePreston Robert Tisch Brain Tumor Center at Duke and the Pediatric Brain Tumor Foundation Institute.

The study was published in the journal Proceedings of the National Academy of Sciences Early Edition the week of Jan. 31.

Two years ago, work by Yan and his colleagues showed that a mutation that disrupts the isocitrate dehydrogenase one (IDH1) and two (IDH2) genes was common in some types of incurable brain tumors, including astrocytomas, oligodendrogliomas, and glioblastomas.

Their work suggested that these tumors require the gene to go awry at some point during cancer development. Though key IDH discoveries have been made around the world, a reason that IDH gene mutations could have such a profound influence on brain cancer has remained elusive.

In the current study, Yan’s group solved the connection to metabolism. The IDH1 and IDH2 genes are known to play an important role in cell metabolism — the conversion of nutrients into energy and into building blocks to manufacture new cells.

The researchers examined concentrations of hundreds of metabolites, including sugar, protein, and fat molecules, in cancer cells that they were able to grow in their laboratory. Technological improvements in the past five years – the science of metabolomics – have made it possible for scientists to simultaneously look at hundreds or thousands of such metabolites to learn what happened in cells with the mutation.

The technology revealed that more than 100 metabolites had altered concentrations in cells with the defective IDH1 or IDH2 genes compared to cells without the defective genes.

One very common metabolite in the human brain, N-acetyl-aspartyl-glutamate, was found to be 50 times less common in cells that had that IDH1 mutation compared to those that did not, said Zach Reitman, a student pursuing combined MD and PhD degrees in the Medical Scientist Training Program at Duke. “The fact that defective genes can alter the metabolism of cancer cells could mean that altering cellular metabolism is an important step in brain tumor development.”

Ivan Spasojevic, PhD, assistant director and manager of the Duke Clinical Pharmacology Laboratory, said, “We devised a brand new method to confirm that some of these changes were also present in patients with brain tumors. This approach gave us confidence that what we saw in metabolomics studies of cancer cells in petri dishes was what was really happening in patients.”

Tumors were removed as part of the patients’ normal treatment course, and the tumor tissue was analyzed with patient consent.

“The study emphasized that cellular metabolism could potentially be an ‘Achilles heel’ for brain tumors, and it points to several promising avenues for future research into new treatments for brain tumors in particular,” said Genglin Jin, PhD, a key author and postdoctoral research fellow in Yan’s lab.

Other authors of the study included Yiping He, M.D., Ph.D., and Darell Bigner, M.D., Ph.D., who are also with the Duke Cancer Institute, the Preston Robert Tisch Brain Tumor Center at Duke and the Pediatric Brain Tumor Foundation Institute, and in the Department of Pathology. Other authors work at the Ludwig Center for Cancer Genetics and Therapeutics and the Howard Hughes Medical Institute at Johns Hopkins Kimmel Cancer Center.

Funding came from American Cancer Society, the Pediatric Brain Tumor Foundation Institute, the Virginia and D.K. Ludwig Fund for Cancer Research, and National Institutes of Health grants. Yan, Bigner and two Johns Hopkins (JHU) scientists reported being eligible for royalties received by JHU on sales of products related to research on IDH1, under licensing agreements between the JHU and Beckman Coulter.