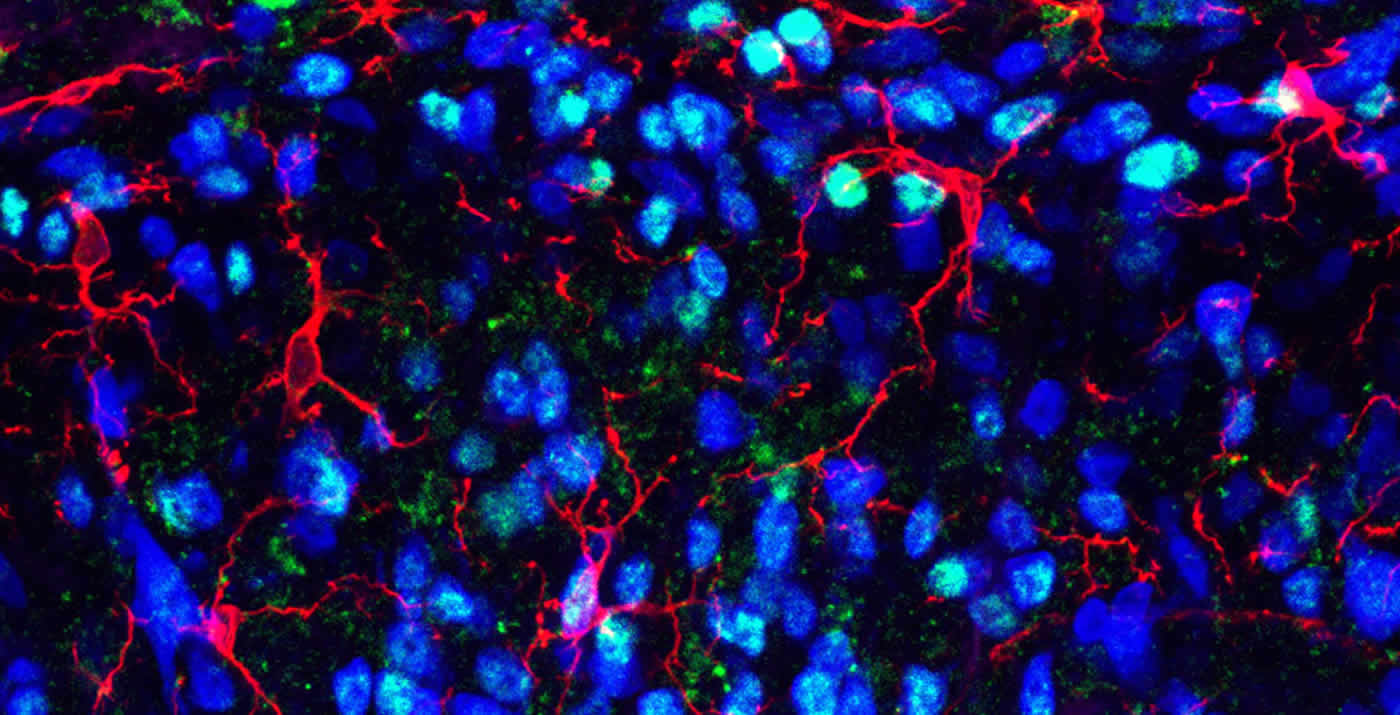 The study also showed that an injury can trigger long-term epigenetic changes in spinal cord sensory circuits. This in turn leads to increased production of FKBP51 which contribute to the body’s pain response. Image is adapted from the UCL press release.

The study, published in Science Translational Medicine, reveals how a protein that shapes the body’s response to stress also drives chronic pain and so offers new targets for future pain treatments.

The researchers studied genetically modified mice that lacked a protein called FKBP51. This protein is very important for regulating stress. Variations in the human FKBP5 gene are linked to the risk of developing stress-related psychiatric disorders, such as major depression and post-traumatic stress disorder (PTSD).

“Inhibiting FKBP51 has a very powerful effect in mice with chronic pain,” says lead author Dr Maria Maiarù (UCL Cell & Developmental Biology). “Not only does it block the pain from their injury without affecting their normal pain response, it also makes them more mobile. We did not find any negative side-effects.”

The team then tested an FKBP51-blocking compound called SAFit2, developed by Dr Felix Hausch at the Max Planck Institute of Psychiatry to treat mood disorders by acting in the brain to reduce anxiety. By selectively blocking FKBP51 in the spinal cord, the UCL researchers were able to test its effects on chronic pain independently of its known effects on the brain. They found that SAFit2 substantially alleviated chronic pain in mice, making it a promising candidate for drug development.

“The compound was designed to have positive effects on mental health, but we have discovered that it also has significant benefits for physical pain syndromes,” says senior author Dr Sandrine Géranton (UCL Cell and Developmental Biology). “Who wouldn’t want a treatment that relieves chronic pain while also making you less stressed? This was an experimental study with mice, but if this could be successfully translated into a treatment for patients, it would be a win-win.”

The study also showed that an injury can trigger long-term epigenetic changes in spinal cord sensory circuits. This in turn leads to increased production of FKBP51 which contribute to the body’s pain response.

“FKBP51 in the brain can prolong the stress response after trauma and we have found that it also exacerbates the pain response,” explains Dr Géranton. “Although this may have once had an evolutionary advantage in promoting survival, in our current lifestyles it can lead to chronic pain, depression and PTSD. Chronic pain affects 1 in 5 adults worldwide and there are currently no effective treatments, so we are extremely excited to have identified a new treatment target.”

About this neuroscience and pain research

Polymorphisms in FKBP51 are associated with stress-related psychiatric disorders and influence the severity of pain symptoms experienced after trauma. We report that FKBP51 (FK506 binding protein 51) is crucial for the full development and maintenance of long-term pain states. Indeed, FKBP51 knockout mice, as well as mice in which silencing of FKBP51 is restricted to the spinal cord, showed reduced hypersensitivity in several persistent pain models in rodents. FKBP51 deletion did not compromise the detection of acute painful stimuli, a critical protective mechanism. Moreover, the intrathecal administration of the specific FKBP51 inhibitor SAFit2 reduced the severity of an established pain state, confirming the crucial role of spinal FKBP51 in nociceptive processing. Finally, glucocorticoid signaling, which is known to modulate persistent pain states in rodents, was impaired in FKBP51 knockout mice. This finding suggested that FKBP51 regulates chronic pain by modulation of glucocorticoid signaling. Thus, FKBP51 is a central mediator of chronic pain, likely in humans as well as rodents, and is a new pharmacologically tractable target for the treatment of long-term pain states.