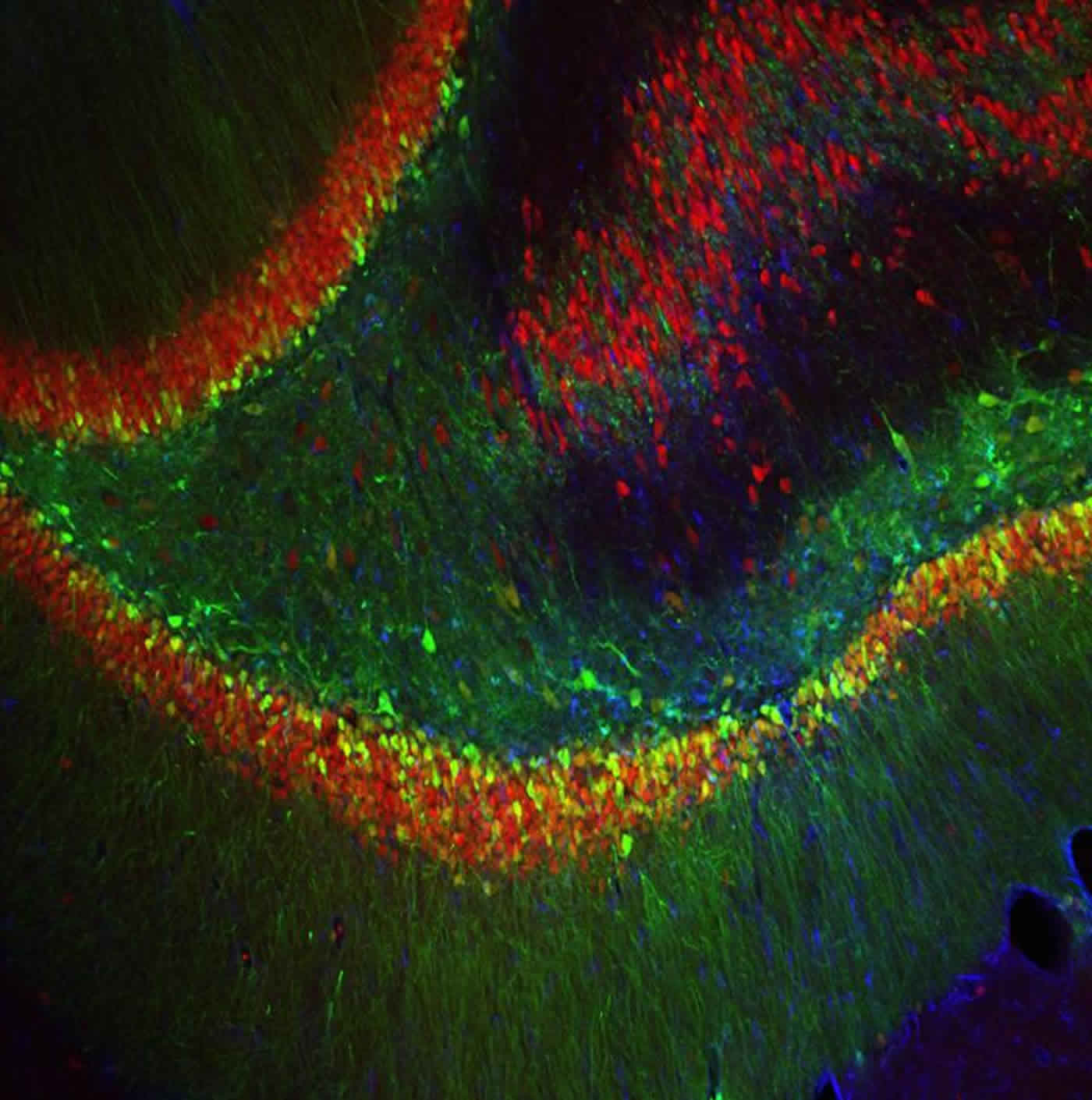 The green cells show where the researchers used an injected virus to block production of FGF9 in rat brains, and reduce anxiety-like behavior. Credit: University of Michigan - Akil laboratory.

Better Treatments for Depression with Help of Discovery About Brain Protein

Low. Down. Less than normal. That’s what the word depression means, and what people with depression often feel like. But sometimes, depression can mean too much of something – as new research shows.

The discovery, about a protein called fibroblast growth factor 9 or FGF9, goes against previous findings that depressed brains often have less of key components than non-depressed brains.

In this case, people with major depression had 32 percent more of FGF9 in a key part of their brain than people without the condition. In rats, raising FGF9 levels artificially led to depression-like behavior changes, and repeated social stress caused brain FGF9 levels to rise.

Taken together, the findings provide more evidence that depression is a physical illness. If FGF9 or its effects prove to be a good target for drugs, the finding could eventually help lead to better medications for the mental health condition that affects millions of Americans.

FGF9’s role was discovered by a team from the University of Michigan Medical School and the Pritzker Neuropsychiatric Disorders Research Consortium, who report their results today in the Proceedings of the National Academy of Sciences. They made the discoveries through years of detailed comparisons of brain tissue donated by people with and without depression, and multiple studies in rats.

Because drugs that block excess production of something in the body generally cause fewer side effects than drugs aimed at increasing something, the team says their findings could hold promise for the development of a new class of antidepressants.

“Fixing depression is not easy, because it’s a disorder at the level of the circuits that connect brain cells, and many regions of the brain are involved,” says Elyse Aurbach, the neuroscience doctoral student who is the paper’s co-first author. “Still, this is the first time FGF9 has been identified as related to depression, and found to be active in a critical area of the brain for the disorder. We and others need to study it further to determine what is going on. It’s very exciting.”

Aurbach and her mentor Huda Akil, Ph.D., worked with colleagues at the U-M Molecular and Behavioral Neuroscience Institute and several other universities to make the discovery. Key to their work was the highly regarded brain bank at the University of California, Irvine, supported by the Pritzker Consortium.

They focus on fibroblast growth factors, molecules involved in cell growth and maintenance in the brain, and in other areas of the body. They’ve studied another FGF molecule, called FGF2, in the brain for years, trying to figure out why it’s lower in people and animals with depression and other mental health disorders. They’ve even shown that giving FGF2 injections can calm anxious rats.

The team was surprised when FGF9 levels were higher in the brains of people who had had depression compared to those who had not. The increased levels held up even after they accounted for differences in the ways the individuals lived, and died, before their brain tissue was preserved for research.

They made the finding using post-mortem brain samples from the Pritzker collection — 36 depressed and 56 non-depressed brains in all. Through three different kinds of microarray gene expression studies and a confirming test called quantitative PCR, they looked at all the genetic activity that was going on when these brain donors died, specifically in the area of the brain called the hippocampus. The hippocampus is a crucial area of the brain for memory, learning and stress control. It has been found to be smaller in people with depression, and this is thought to be the result of chronic stress that affects the health of brain cells in that region.

Each experiment showed higher FGF9 levels in the depressed brains. What’s more, the levels of several other fibroblast growth factors were down when FGF9 was up, suggesting that the entire system for regulating cell growth and development in the brains of depressed people was altered.

Intrigued by the human results, the team decided to explore FGF9’s role further through experiments with rats. This allowed them to do something they can’t do in humans: try to determine if FGF9 rises in response to something, such as stress, or if levels are naturally higher and predispose someone to depression.

First, they exposed rats to repeated social stress over a week and a half, and looked at the levels of FGF9 in various regions of the brain’s hippocampus. Not only did the levels rise, but the rats got more socially withdrawn and less likely to maintain a healthy weight.

Next, they looked at what happens if FGF9 is injected into the brain – specifically, the ventricle, or open space between the brain’s two sides. Other rats received a placebo. The rats that got the FGF9 acted more anxious, and moved around less – and these depression-like changes persisted with repeated injections.

Lastly, the group created a virus that interfered with FGF9 production through a process called RNA interference. They injected it, or a comparison virus that didn’t block FGF9 production, into rats’ brains – in a specific area of the hippocampus called the dentate gyrus. The active virus caused levels of FGF9 to drop about 30 percent, while other FGF molecule levels stayed the same. And the rats showed less anxiety.

“We call this approach ‘reverse translation’,” says Akil, who is the Gardner Quarton Professor of Neurosciences, a professor of psychiatry and co-director of MBNI. “We start by careful, broad scale analyses in the human brain to discover new molecular players that might play a role in triggering or maintaining the depression. We then follow them up in rodent studies to understand the role of these molecules and determine whether we can target them for new treatments”.

Aurbach, Akil and their colleagues are already performing more experiments to determine why FGF9 production rises, as well as to study it in other brain regions and to see how it affects communication among brain cells. A patent application has been filed and is being managed by the Pritzker Consortium. They hope their work will lead to a search for medications to affect FGF9 levels, but caution that the molecule is important in the lungs and blood vessels, too.

About this genetics and depression research

In addition to Aurbach and Akil, and co-first author and recent U-M neuroscience graduate Edny Gula Inui, the research team included other U-M faculty and students, and members of the University of California, Irvine, the HudsonAlpha Institute for Biotechnology, Cornell University and Stanford University. The U-M Vector Core assisted.

Funding: Funding came from the Pritzker Consortium, the National Science Foundation, the Office of Naval Research, the National Institute of Mental Health (MH104261), the Hope for Depression Research Foundation, and the U-M Neuroscience Graduate Program funded by NIH. The team is very grateful to the patients and their families who made it possible to conduct these studies.

Fibroblast growth factor 9 is a novel modulator of negative affect

Both gene expression profiling in postmortem human brain and studies using animal models have implicated the fibroblast growth factor (FGF) family in affect regulation and suggest a potential role in the pathophysiology of major depressive disorder (MDD). FGF2, the most widely characterized family member, is down-regulated in the depressed brain and plays a protective role in rodent models of affective disorders. By contrast, using three microarray analyses followed by quantitative RT-PCR confirmation, we show that FGF9 expression is up-regulated in the hippocampus of individuals with MDD, and that FGF9 expression is inversely related to the expression of FGF2. Because little is known about FGF9’s function in emotion regulation, we used animal models to shed light on its potential role in affective function. We found that chronic social defeat stress, an animal model recapitulating some aspects of MDD, leads to a significant increase in hippocampal FGF9 expression, paralleling the elevations seen in postmortem human brain tissue. Chronic intracerebroventricular administration of FGF9 increased both anxiety- and depression-like behaviors. In contrast, knocking down FGF9 expression in the dentate gyrus of the hippocampus using a lentiviral vector produced a decrease in FGF9 expression and ameliorated anxiety-like behavior. Collectively, these results suggest that high levels of hippocampal FGF9 play an important role in the development or expression of mood and anxiety disorders. We propose that the relative levels of FGF9 in relation to other members of the FGF family may prove key to understanding vulnerability or resilience in affective disorders.