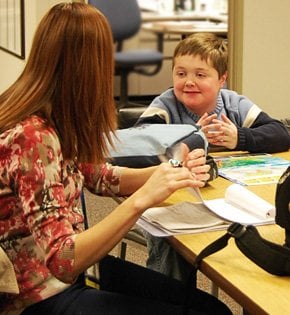 Jacob Rutt is a bright 11-year-old who likes to draw detailed maps in his spare time. But the budding geographer has a hard time with physical skills most children take for granted; running and climbing trees are beyond him, and even walking can be difficult. He was diagnosed with a form of muscular dystrophy known as Duchenne when he was two years old.

The disease affects about 1 in 3,500 newborns, mostly boys, worldwide. It usually becomes apparent in early childhood, as weakened skeletal muscles cause delays in milestones such as sitting and walking. Children usually become wheelchair-dependent during their teens. As heart muscle is increasingly affected, the disease becomes life threatening and many patients die from heart failure in their 20s.

Today, Jacob is one of 51 children participating in a nationwide clinical trial for a new type treatment that could offer help to those suffering from devastating neuromuscular disease. Clinical researchers at UC Davis Medical Center and a handful other research centers around the nation are testing a high-tech drug designed to fix the underlying genetic defect causing the progressive muscular decline that is seen in children with Duchenne.

“This type of genetic therapy is the most exciting treatment approach I have witnessed in my career for Duchenne muscular dystrophy,” said Craig McDonald, professor and chair of the Department of Physical Medicine Rehabilitation at UC Davis, as well as principal investigator of the national clinical trial that Jacob is participating in. “We are hopeful that it will delay many of the disease’s manifestations and ultimately improve life expectancy for patients.”

Duchenne muscular dystrophy is caused by genetic mutations in the gene for the muscle protein dystrophin. The protein is a stabilizer that protects muscle fibers; without enough functional dystrophin, muscles become damaged, causing them to weaken and deteriorate over time.

Functioning a bit like a bridge over a dangerous chasm, the experimental drug, known as drisapersen, is designed to effectively cover over the specific genetic mutation, allowing the problem area to be skipped and causing cells to produce a slightly shorter, but functional, dystrophin protein.

Because Duchenne muscular dystrophy is rare and the drug addresses only a small subset of the genetic variants responsible for the disease, recruiting qualified patients was not easy. Of the medical centers involved in the study, UC Davis, with its highly regarded neuromuscular disease and physical medicine and rehabilitation expertise, enrolled the largest group of patients in the nation. For more than a year, its eight young participants, including Jacob, have been to Sacramento from as far away as Colorado, Utah and Arizona. For each participant, the clinical trial involved weekly injections, which meant Jacob had to fly from Southern California to the UC Davis clinic every Friday for 24 weeks.

“I’ve never seen such a complicated study in terms of logistics,” said Erica Goude, who serves as the research coordinator at the UC Davis site. “We’re collaborating closely with departments of pediatrics, cardiology, radiology and several others, and their outstanding commitment to the project has made our tasks much easier and more efficient. This study is an amazing team effort that I see frequently reflected in the smiles of our patients and their families.”

The study also entails extensive physical testing to monitor each participant’s progress over time. To assess each child’s physical abilities and progress, participants complete a six-minute walking test specifically designed and validated by a UC Davis team that included McDonald and Erik Henricson, a UC Davis muscular dystrophy researcher. The six-minute test is now used worldwide in all ambulatory clinical trials for Duchenne. Investigators also measure muscle strength and the level of dystrophin in the participants’ muscles, the latter results obtained through muscle biopsies at several times during study. Of particular interest to the research teams are the residual effects of the drug several weeks after the injection series is completed.

Although McDonald says it is too early to draw conclusions from the current clinical trial, he suggests there is reason to be optimistic based on animal studies and evidence from another clinical trial in Europe. In that trial, patients and study investigators knew which patients were actually taking the experimental drug, meaning it was an “open” study. The current U.S. study is more rigorous because doctors and families are “blinded” about which drug regimen each participant has, either one of two dosages of the drug or a placebo until the end of the study.

According to McDonald, the antisense oligonucleotide-mediated genetic therapy approach is particularly exciting because of its potential applications to most other variants of Duchenne muscular dystrophy and other genetic diseases. Although the current experimental therapy specifically addresses mutations in only one particular region of the gene, the same therapeutic concept can be applied to many others.

“If successful, this approach can be developed into specific gene therapy that represents truly personalized medicine,” said McDonald. “Covering a mutation to restore a normal genetic open reading frame for protein synthesis can be a powerful approach for a variety of genetic diseases.”

Standardizing the drug as a therapy for Duchenne patients still requires approval by the U.S. Food and Drug Administration. Investigators say the therapy could be similar to insulin injections for diabetes. But rather than daily injections, the Duchenne treatment might only involve weekly shots, which youngsters could learn to administer on their own.

Now that the clinical trial is closed at UC Davis to new enrollees, McDonald and his study team are completing the protocol for each participant and analyzing the resulting data. They expect results sometime in late 2013 or 2014 once all the participants around the country have completed the trial.

In the meantime, even though no one knows whether Jacob received the genetic therapy drug or a placebo, his family is feeling good about being in a clinical trial. According to Jacob’s dad, Timothy Rutt, the family even hopes to use some of its new frequent flyer miles for upcoming vacations.

“Jake really enjoyed being part of the study,’” said the elder Rutt, who, as the editor of an online news publication called altadenablog.com, has written about his son’s participation. “We were proud that he showed a great deal of courage throughout the trial and understood its importance to kids like him.”

Notes about this Muscular Dystrophy research