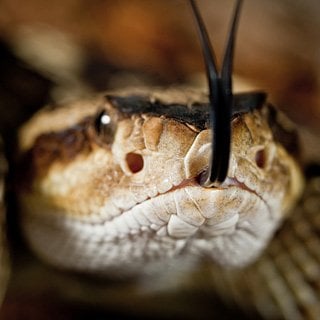 The snake-sensitive neurons were more numerous, and responded more strongly and rapidly, than other nerve cells in the brains of rhesus macaque monkeys.
Home
Featured

Snakes on the Brain: Are Primates Hard-Wired to See Snakes?

Was the evolution of high-quality vision in our ancestors driven by the threat of snakes? Work by neuroscientists in Japan and Brazil is supporting the theory originally put forward by Lynne Isbell, professor of anthropology at the University of California, Davis.

In a paper published Oct. 28 in the journal Proceedings of the National Academy of Sciences, Isbell; Hisao Nishijo and Quan Van Le at Toyama University, Japan; and Rafael Maior and Carlos Tomaz at the University of Brasilia, Brazil; and colleagues show that there are specific nerve cells in the brains of rhesus macaque monkeys that respond to images of snakes.

The snake-sensitive neurons were more numerous, and responded more strongly and rapidly, than other nerve cells that fired in response to images of macaque faces or hands, or to geometric shapes. Isbell said she was surprised that more neurons responded to snakes than to faces, given that primates are highly social animals.

Isbell originally published her hypothesis in 2006, following up with a book, “The Fruit, the Tree and the Serpent” (Harvard University Press, 2009) in which she argued that our primate ancestors evolved good, close-range vision primarily to spot and avoid dangerous snakes.

Modern mammals and snakes big enough to eat them evolved at about the same time, 100 million years ago. Venomous snakes are thought to have appeared about 60 million years ago — “ambush predators” that have shared the trees and grasslands with primates.

Nishijo’s laboratory studies the neural mechanisms responsible for emotion and fear in rhesus macaque monkeys, especially instinctive responses that occur without learning or memory. Previous researchers have used snakes to provoke fear in monkeys, he noted. When Nishijo heard of Isbell’s theory, he thought it might explain why monkeys are so afraid of snakes.

The monkeys tested in the experiment were reared in a walled colony and neither had previously encountered a real snake.

“I don’t see another way to explain the sensitivity of these neurons to snakes except through an evolutionary path,” Isbell said.

Isbell said she’s pleased to be able to collaborate with neuroscientists.

Other co-authors on the paper were: Jumpei Matsumoto, Minh Nguyen, Etsuro Hori, Anh Hai Tran and Taketoshi Ono at Toyama University. The work is an international collaboration under the Asian Core Program of the Japan Society for the Promotion of Science.