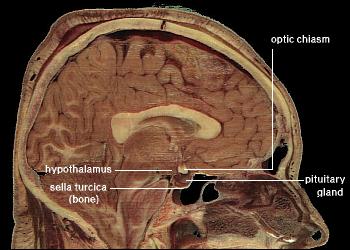 Estrogen: Not Just Produced by the Ovaries

A UW-Madison research team reports today that the brain can produce and release estrogen — a discovery that may lead to a better understanding of hormonal changes observed from before birth throughout the entire aging process.

The new research shows that the hypothalamus can directly control reproductive function in rhesus monkeys and very likely performs the same action in women.

Scientists have known for about 80 years that the hypothalamus, a region in the brain, is involved in regulating the menstrual cycle and reproduction. Within the past 40 years, they predicted the presence of neural estrogens, but they did not know whether the brain could actually make and release estrogen.

Most estrogens, such as estradiol, a primary hormone that controls the menstrual cycle, are produced in the ovaries. Estradiol circulates throughout the body, including the brain and pituitary gland, and influences reproduction, body weight, and learning and memory. As a result, many normal functions are compromised when the ovaries are removed or lose their function after menopause.

“Discovering that the hypothalamus can rapidly produce large amounts of estradiol and participate in control of gonadotropin-releasing hormone neurons surprised us,” says Ei Terasawa, professor of pediatrics at the UW School of Medicine and Public Health and senior scientist at the Wisconsin National Primate Research Center. “These findings not only shift the concept of how reproductive function and behavior is regulated but have real implications for understanding and treating a number of diseases and disorders.”

For diseases that may be linked to estrogen imbalances, such as Alzheimer’s disease, stroke, depression, experimental autoimmune encephalomyelitis and other autoimmune disorders, the hypothalamus may become a novel area for drug targeting, Terasawa says. “Results such as these can point us in new research directions and find new diagnostic tools and treatments for neuroendocrine diseases.”

The study, published today in the Journal of Neuroscience, “opens up entirely new avenues of research into human reproduction and development, as well as the role of estrogen action as our bodies age,” reports the first author of the paper, Brian Kenealy, who earned his Ph.D. this summer in the Endocrinology and Reproductive Physiology Program at UW-Madison. Kenealy performed three studies. In the first experiment, a brief infusion of estradiol benzoate administered into the hypothalamus of rhesus monkeys that had surgery to remove their ovaries rapidly stimulated GnRH release. The brain took over and began rapidly releasing this estrogen in large pulsing surges.

In the second experiment, mild electrical stimulation of the hypothalamus caused the release of both estrogen and GnRH (thus mimicking how estrogen could induce a neurotransmitter-like action). Third, the research team infused letrazole, an aromatase inhibitor that blocks the synthesis of estrogen, resulting in a lack of estrogen as well as GnRH release from the brain. Together, these methods demonstrated how local synthesis of estrogen in the brain is important in regulating reproductive function.

The reproductive, neurological and immune systems of rhesus macaques have proven to be excellent biomedical models for humans over several decades, says Terasawa, who focuses on the neural and endocrine mechanisms that control the initiation of puberty. “This work is further proof that these animals can teach us about so many basic functions we don’t fully understand in humans.”

Leading up to this discovery, Terasawa said, recent evidence had shown that estrogen acting as a neurotransmitter in the brain rapidly induced sexual behavior in quails and rats. Kenealy’s work is the first evidence of this local hypothalamic action in primates, and in those that don’t even have ovaries.

“The discovery that the primate brain can make estrogen is key to a better understanding of hormonal changes observed during every phase of development, from prenatal to puberty, and throughout adulthood, including aging,” Kenealy says.