Summary: Larger hippocampal volume in combination with how safe teens feel in their community environments contribute to how depressed they feel, a new study reports.

Research on depression in adolescents in recent years has focused on how the physical brain and social experiences interact. A new University of California, Davis, study, however, shows that adolescents with large hippocampal volume were more, or less, susceptible to feelings of depression depending on how unsafe — or conversely — protected they felt in their home and community environments.

Hippocampal volume refers to the overall size of the hippocampus, a brain structure below the cerebral cortex. Traditionally, research has shown that a smaller hippocampus is implicated in depression, but this study showed that a larger hippocampus may indicate a greater ability for adolescents to take advantage of the support in their environments and overcome fear, anxiety and depression.

“As adolescents with more severe depressive symptoms are at greater risk of developing clinically diagnosed depressive disorders in adolescence and beyond, our results have important implications for prevention and intervention strategies. With this knowledge, we can better prevent and treat depressive symptoms in the teen years,” said Amanda Guyer, professor of human development and family studies with the UC Davis Center for Mind and Brain. She is a co-author of the study.

The study also pointed out that as neuroimaging becomes more feasible in diagnosis, the findings could prove helpful in identifying individuals’ risk for depression early on. 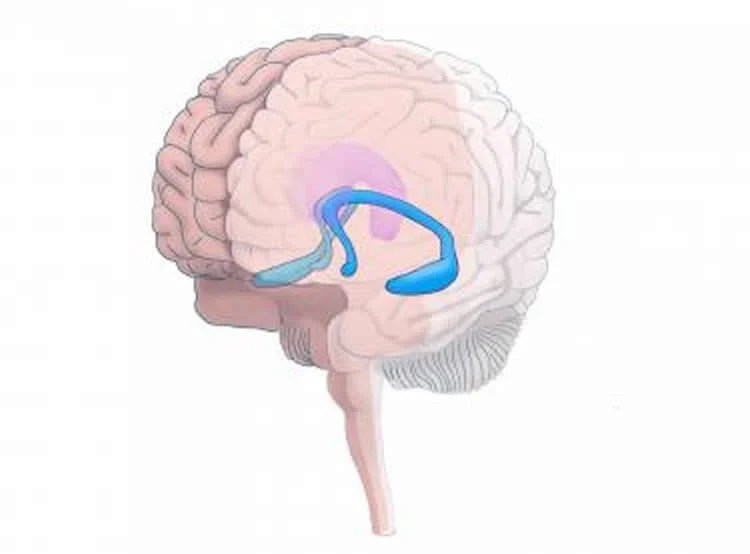 This illustration shows the hippocampus, in blue, located in the medial temporal lobe of the brain. It is a part of the brain that deals with emotions. NeuroscienceNews.com image is credited to Jay Leek.

The research represents a significant step forward to better understanding the complex interactive role of biological and environmental factors in both risk and resilience to depressive symptoms, the study found.

The teens involved in the study were of Mexican origin, a group which is a group at heightened risk for depression, the authors state.

Funding: This research was supported by the National Institutes of Health; William T. Grant Foundation; National Science Foundation; UC Davis, including the Center for Poverty Research; and U.S. Department of Health and Human Services, Office of the Assistant Secretary for Planning and Analysis.

Recent models have focused on how brain-based individual differences in social sensitivity shape affective development in adolescence, when rates of depression escalate. Given the importance of the hippocampus in binding contextual and affective elements of experience, as well as its putative role in depression, we examined hippocampal volume as a moderator of the effects of social context on depressive symptoms in a sample of 209 Mexican-origin adolescents. Adolescents with larger versus smaller hippocampal volumes showed heightened sensitivity in their depressive symptoms to a protective factor inside the home (sense of family connectedness) and a risk factor outside the home (community crime exposure). These interactive effects uniquely predicted depressive symptoms and were greater for the left side, suggesting two independent social-contextual contributions to depression that were moderated by left hippocampal volume. Results elucidate complex brain-environment interplay in adolescent depression, offering clues about for whom and how social context plays a role.