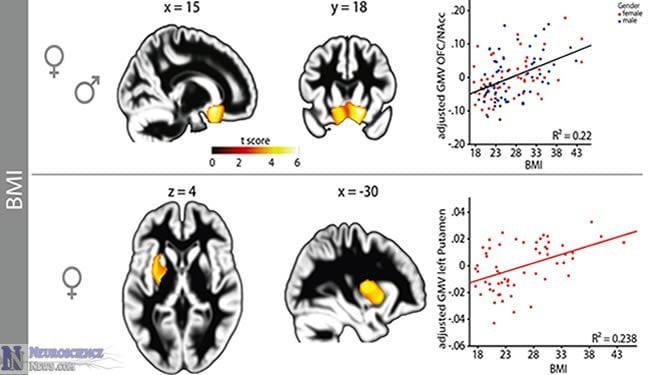 Study reveals possible gender-specific influence of overeating on the brain.

Being overweight is accompanied by changes in brain structure and behaviour.

Researchers at the Max Planck Institute for Human Cognitive and Brain Sciences and the Integrated Research and Treatment Center AdiposityDiseases in Leipzig have shown that there are also differences between men and women.

The research studied normal and overweight men and women, who took part in a game of luck. Their results showed that overweight women kept choosing the option that promised attractive short-term rewards but led to long-term losses. Men also consistently did the same regardless of their weight. Only the lean women demonstrated that they took the possible long-term consequences of their actions into account.

An investigation of the participants’ brain structure shows possible reasons for this. Men and women who are overweight show changes in brain regions that have been linked with the processing of rewards and feelings of satiety after eating. In the women who were overweight, additional changes were found in areas that are important for goal-directed control of behaviour. This new knowledge may help to tailor treatments of obesity specifically for each gender.

In order to compare brain structure and impulsive behaviour in normal and overweight men and women, the researchers in Leipzig utilised a computerised card game commonly used in psychology, known as the Iowa Gambling Task.

In this game, the participants chose between two decks of cards with differing risks and success rates. “In principle, this task mirrors the everyday trade-off between immediate reward from overeating and the negative long-term consequences this will have on one’s body,” explains Annette Horstmann, principle investigator of the study. Women who were overweight tended to select the more short-sighted option. They were much more likely to choose the deck of cards which led to higher short-term success but a negative outcome in the long term. While lean women learned to avoid the deck that led to long-term losses, the overweight women continued to employ the strategy that focused on immediate rewards. There was no difference in the behaviour of lean and overweight men, which was highly similar to that of the overweight women.

Using voxel-based morphometry, a form of MRI, the volume of grey matter in the participants’ brains was assessed. In general, participants who were overweight had a greater density of grey matter in areas associated with reward processing. Likewise, the hypothalamus, a brain region known to be connected with the control of hunger and satiety, was much larger in overweight men and women. In contrast, areas associated with the cognitive control of goal-directed behaviour were significantly different between lean women and women who were overweight.

“The lack of impulse control which accompanies this is a further indication that obesity in otherwise healthy individuals should be classified as an addictive behaviour,” says Horstmann. The same structural changes have been found in previous studies examining women with bulimia. This suggests that the differences in grey matter are not directly connected with being overweight but with the eating behaviour itself. Whether changed eating behaviour and the lack of impulse control cause the structural changes in the brain or vice versa remains to be established in future studies.

Could We Train Our Brains to See New Colors?

Source: Max Planck Institute for Human Cognitive and Brain Sciences in Leipzig press release via Peter Zekert
Image Source: Neuroscience News image adapted from Max Planck
Thanks to Peter Zekert for the suggestion and permission for use of the article.