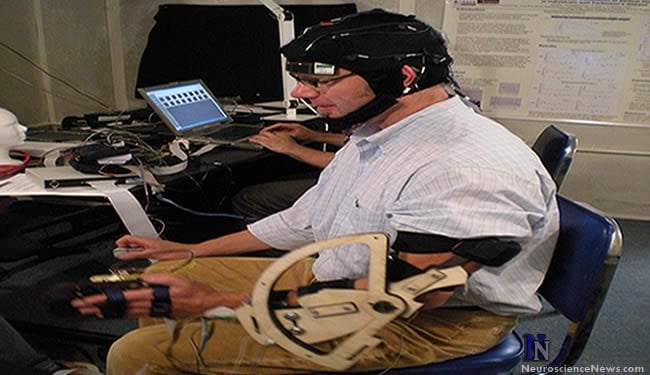 Engineers work to design prosthetic arm that allows amputees to feel what they touch.

Engineering researchers at four U.S. universities are embarking on a four-year project to design a prosthetic arm that amputees can control directly with their brains and that will allow them to feel what they touch. While it may sound like science fiction, the researchers say much of the technology has already been proven in small-scale demonstrations.

“There’s nothing fictional about this,” said Rice University co-principal investigator Marcia O’Malley. “The investigators on this grant have already demonstrated that much of this is possible. What remains is to bring all of it — noninvasive neural decoding, direct brain control and tactile sensory feedback — together into one device.”

O’Malley and her co-investigators on the project — Michigan’s Brent Gillespie, Drexel’s Patricia Shewokis and Maryland’s José Contreras-Vidal — have previously demonstrated technology that allowed amputees to correctly perceive and manipulate objects with a prosthetic gripper based upon sensory feedback that was provided in a natural way to the remaining portion of their limbs.

“Neuroprosthetic control is an important part of our project, but an equally important challenge is providing sensory feedback for contact tasks that are performed with the prosthesis,” Gillespie said.

“The idea is to provide a range of sensory feedback that can be integrated by the user, much like able-bodied individuals integrate a variety of tactile, kinesthetic and force information from nerves in their skin and muscles,” Contreras-Vidal said.

Contreras-Vidal has previously demonstrated technology that allowed test subjects to move a cursor on a computer screen simply by thinking about it. That technology noninvasively taps into the user’s neural network using a cap of electrodes that read electrical activity on the scalp via electroencephalography (EEG). The team plans to combine this EEG information with real-time data about blood-oxygen levels in the user’s frontal lobe using functional near-infrared (fNIR) technology developed by Drexel’s Optical Brain Imaging Laboratory.

Shewokis said, “We want to provide intuitive control over contact tasks, and we’re also interested in strengthening the motor imagery the patients are using as they think about what they want their arm to do. Ideally, this tactile or haptic feedback will improve the signal from the EEG and fNIR decoder and make it easier for patients to get their prosthetic arms to do exactly what they want them to do. We are moving toward incorporating the ‘brain in the loop’ for prosthetic use and control.”

O’Malley said the new technology is a big leap over what’s used in existing prosthetic devices, which don’t allow amputees to feel what they touch. Some state-of-the-art prostheses today use force-feedback systems that vibrate — much like the vibrate mode on a mobile phone — to provide limited information about objects a prosthetic hand is gripping.

How Microglia Contribute to Alzheimer’s Disease

“Often, these vibrotactile cues aren’t very helpful,” O’Malley said. “Many times individuals simply rely on visual feedback — watching their prosthesis grasp an object — to infer whether the object is soft or hard, how tightly they are grasping it and the like. There’s a lot of room for improvement.”

“This truly unique team has been given the opportunity to help solve the challenging problem of brain-to-machine interface,” Gillespie said. “I’m excited about our breakthroughs and the promise for future results. We are approaching the dilemma with big respect for the brain/body connection and hope to discover methods to harness the body in new ways.

“Sensory feedback, especially haptic feedback, is often overlooked, but we think it’s the key to closing the loop between the brain and motorized prosthetic devices,” he said. “These results indicate that we stand a very good chance to help amputees and also help others who may be suffering from motor impairments.”