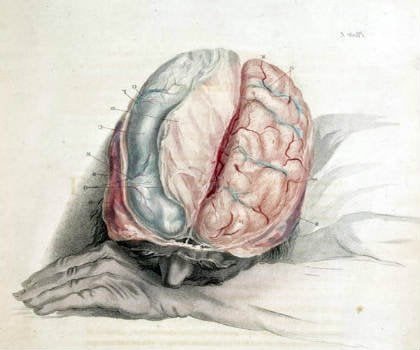 Comparing mice with experimentally induced mild TBI to uninjured mice, the scientists found the injured mice were unable to stay awake for long periods of time. The injured mice had lower activity among orexin neurons, which help to maintain the animals’ wakefulness. This is similar to results in human studies showing decreased orexin levels in the spinal fluid after TBI. The image shows a sleeping man with an exposed brain. Credit provided below.
Home
Featured

Scientists who fed a cocktail of key amino acids to mice improved sleep disturbances caused by brain injuries in the animals. These new findings suggest a potential dietary treatment for millions of people affected by traumatic brain injury (TBI)—a condition that is currently untreatable.

“If this type of dietary treatment is proved to help patients recover function after traumatic brain injury, it could become an important public health benefit,” said study co-leader Akiva S. Cohen, Ph.D., a neuroscientist at The Children’s Hospital of Philadelphia (CHOP).

Cohen is the co-senior author of the animal TBI study appearing today in Science Translational Medicine. He collaborated with two experts in sleep medicine: co-senior author Allan I. Pack, M.D., Ph.D., director of the Center for Sleep and Circadian Neurobiology in the Perelman School of Medicine at the University of Pennsylvania; and first author Miranda M. Lim, M.D., Ph.D., formerly at the Penn Sleep Center, and now on faculty at the Portland VA Medical Center and Oregon Health and Science University.

Every year in the U.S., an estimated 2 million people suffer a TBI, accounting for a major cause of disability across all age groups. Although 75 percent of reported TBI cases are milder forms such as concussion, even concussion may cause chronic neurological impairments, including cognitive, motor and sleep problems.

“Sleep disturbances, such as excessive daytime sleepiness and nighttime insomnia, disrupt quality of life and can delay cognitive recovery in patients with TBI,” said Lim, a neurologist and sleep medicine specialist.

Although physicians can relieve the dangerous swelling that occurs after a severe TBI, there are no existing treatments to address the underlying brain damage associated with neurobehavioral problems such as impaired memory, learning and sleep patterns.

Cohen and team investigate the use of selected branched chain amino acids (BCAA)—precursors of the neurotransmitters glutamate and GABA, which are involved in communication among neurons and help to maintain a normal balance in brain activity. His research team previously showed that a BCAA diet restored cognitive ability in brain-injured mice. The current study was the first to analyze sleep-wake patterns in an animal model.

Comparing mice with experimentally induced mild TBI to uninjured mice, the scientists found the injured mice were unable to stay awake for long periods of time. The injured mice had lower activity among orexin neurons, which help to maintain the animals’ wakefulness. This is similar to results in human studies showing decreased orexin levels in the spinal fluid after TBI.

In the current study, the dietary therapy restored the orexin neurons to a normal activity level and improved wakefulness in the brain-injured mice. EEG recordings also showed improved brain wave patterns among the mice that consumed the BCAA diet.

“These results in an animal model provide a proof-of-principle for investigating this dietary intervention as a treatment for TBI patients,” said Cohen. “If a dietary supplement can improve sleeping and waking patterns as well as cognitive problems, it could help brain-injured patients regain crucial functions.” Cohen cautioned that current evidence does not support TBI patients medicating themselves with commercially available amino acids.

Children Don’t Believe Everything They Are Told

Notes about this sleep and TBI disease research

The National Institutes of Health (grants HL007713, HL111725-01A1, NS069629 and HD059288) supported this study, as well as the University of Pennsylvania Department of Medicine/Measey Research Fellowship. Cohen and CHOP hold a provisional U.S. patent for the use of BCAA as a therapy for traumatic brain injury.