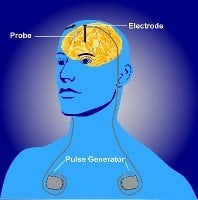 Participant in this research were treated with deep brain stimulation in order to moderate the activity of dysfunctional brain circuits. The illustration shows how complete DBP devices are implanted.
Home
Featured

In a world first, a team of researchers at the Krembil Neuroscience Centre and the University Health Network have shown that Deep Brain Stimulation (DBS) in patients with chronic, severe and treatment-resistant Anorexia Nervosa (anorexia) helps some patients achieve and maintain improvements in body weight, mood, and anxiety.

The results of this trial, entitled “Deep Brain Stimulation of the Subcallosal Cingulate Area for Treatment-Refractory Anorexia Nervosa: A Phase I Pilot Trial”, will published in the medical journal The Lancet. The study is a collaboration between lead author Dr. Nir Lipsman a neurosurgery resident at the University of Toronto and PhD student at the Krembil Neuroscience Centre; Dr. Andres Lozano, a neurosurgeon, at the Krembil Neuroscience Centre of Toronto Western Hospital and a professor and chairman of neurosurgery at the University of Toronto, whose research lab was instrumental in conducting the DBS research; and Dr. Blake Woodside, medical director of Canada’s largest eating disorders program at Toronto General Hospital and a professor of psychiatry at the University of Toronto.

The phase one safety trial investigated the procedure in six patients who would likely continue with a chronic illness and/or die a premature death because of the severity of their condition. The study’s participants had an average age of 38, and a mean duration of illness of 18 years. In addition to the anorexia, all patients, except one, also suffered from psychiatric conditions such as major depressive disorder and obsessive-compulsive disorder. At the time of the study, all patients currently, or had previously, suffered multiple medical complications related to their anorexia – altogether, the six patients had a history of close to 50 hospitalizations during their illnesses.

Study participants were treated with Deep Brain Stimulation (DBS), a neurosurgical procedure that moderates the activity of dysfunctional brain circuits. Neuroimaging has shown that there are both structural and functional differences between anorexia patients and healthy controls in brain circuits which regulate mood, anxiety, reward and body-perception.

Patients were awake when they underwent the procedure which implanted electrodes into a specific part of the brain involved with emotion, and found to be highly important in disorders such as depression. During the procedure, each electrode contact was stimulated to look for patient response of changes in mood, anxiety or adverse effects. Once implanted, the electrodes were connected to an implanted pulse generator below the right clavicle, much like a heart pacemaker.

Testing of patients was repeated at one, three, and six-month intervals after activation of the pulse generator device. After a nine-month period following surgery, the team observed that three of the six patients had achieved weight gain which was defined as a body-mass index (BMI) significantly greater than ever experienced by the patients. For these patients, this was the longest period of sustained weight gain since the onset of their illness. Furthermore, four of the six patients also experienced simultaneous changes in mood, anxiety, control over emotional responses, urges to binge and purge and other symptoms related to anorexia, such as obsessions and compulsions. As a result of these changes, two of these patients completed an inpatient eating disorders program for the first time in the course of their illness.

“We are truly ushering in a new of era of understanding of the brain and the role it can play in certain neurological disorders,” says Dr. Lozano. “By pinpointing and correcting the precise circuits in the brain associated with the symptoms of some of these conditions, we are finding additional options to treat these illnesses.”

While the treatment is still considered experimental, it is believed to work by stimulating a specific area of the brain to reverse abnormalities linked to mood, anxiety, emotional control, obsessions and compulsions all of which are common in anorexia. In some cases after surgery, patients are then able to complete previously unsuccessful treatments for the disease. The research may not only provide an additional therapy option for these patients in the future, but also furthers practitioners’ understanding of anorexia and the factors that cause it to be persistent.

“There is an urgent need for additional therapies to help those suffering from severe anorexia,” says Dr. Woodside. “Eating disorders have the highest death rate of any mental illness and more and more women are dying from anorexia. Any treatment that could potentially change the natural course of this illness is not just offering hope but saving the lives for those that suffer from the extreme form of this condition.”

A leading international expert in the field of DBS research, Dr. Lozano has been exploring the potential of DBS to treat a variety of conditions. Most recently, his team began the first ever DBS trial of patients with early Alzheimer’s disease, and showed that stimulation may help improve memory. This trial has now entered its second phase and expanded to medical centres in the United States.

Anorexia Nervosa is an eating disorder and psychiatric condition characterized by food restriction, body distortion and an overwhelming fear of gaining weight. Death rates from anorexia can be as high as 15%, and a further 15% to 20% of those with anorexia develop a chronic course of the condition that is unresponsive to traditional treatments. Research has shown that addressing the emotional symptoms, psychological issues and other mental illnesses associated with anorexia, rather than solely treating low body weight, is linked to lower rates of relapse and improved treatment outcomes.

Notes about this anorexia nervosa research

UHN researchers hope to expand their study, and to design a trial that will determine the long-term impact of DBS in a larger number of patients with treatment-resistant anorexia nervosa.

This research was made possible by a grant from the Klarman Family Foundation Grants Program in Eating Disorders Research and a Fellowship from the Canadian Institutes of Health Research (CIHR).

Contact: Alexa Giorgi – University Health Network
Source: University Health Network press release
Image Source: The deep brain stimulation illustration is credited to the National Institute of Mental Health and is in the public domain.
Original Research: The abstract for “Deep Brain Stimulation of the Subcallosal Cingulate Area for Treatment-Refractory Anorexia Nervosa: A Phase I Pilot Trial” by Dr. Nir Lipsman, Dr. Andres Lozano and Dr. Blake Woodside will be available in The Lancet during the week of March 4 2013. We will link to the research and post the DOI when it becomes available.