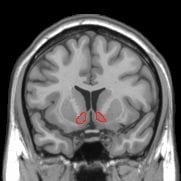 Targeting the nucleus accumbens with DBS may be able to modify specific feeding behaviors linked to body weight changes and obesity.
Home
Featured

Deep brain stimulation (DBS) in a precise region of the brain appears to reduce caloric intake and prompt weight loss in obese animal models, according to a new study led by researchers at the University of Pennsylvania. The study, reported in the Journal of Neuroscience, reinforces the involvement of dopamine deficits in increasing obesity-related behaviors such as binge eating, and demonstrates that DBS can reverse this response via activation of the dopamine type-2 receptor.

“Based on this research, DBS may provide therapeutic relief to binge eating, a behavior commonly seen in obese humans, and frequently unresponsive to other approaches,” said senior author Tracy L. Bale, PhD, associate professor of neuroscience in Penn’s School of Veterinary Medicine’s Department of Animal Biology and in the Perelman School of Medicine’s Department of Psychiatry. DBS is currently used to reduce tremors in Parkinson’s disease and is under investigation as a therapy for major depression and obsessive-compulsive disorder.

Nearly 50 percent of obese people binge eat, uncontrollably consuming palatable highly caloric food within a short period of time. In this study, researchers targeted the nucleus accumbens, a small structure in the brain reward center known to be involved in addictive behaviors. Mice receiving the stimulation ate significantly less of the high fat food compared to mice not receiving DBS. Following stimulation, mice did not compensate for the loss of calories by eating more. However, on days when the device was turned off, binge eating resumed.

Researchers also tested the long-term effects of DBS on obese mice that had been given unlimited access to high-fat food. During four days of continuous stimulation, the obese mice consumed fewer calories and, importantly, their body weight dropped. These mice also showed improvement in their glucose sensitivity, suggestive of a reversal of type 2 diabetes.

“These results are our best evidence yet that targeting the nucleus accumbens with DBS may be able to modify specific feeding behaviors linked to body weight changes and obesity,” Bale added.

“Once replicated in human clinical trials, DBS could rapidly become a treatment for people with obesity due to the extensive groundwork already established in other disease areas,” said lead author Casey Halpern, MD, resident in the Department of Neurosurgery of the Perelman School of Medicine at the University of Pennsylvania.

Nine Out of Ten Want to Know Their Brain Disease Risk

Notes about this deep brain stimulation and binge eating research

The study was funded by the National Institutes of Health (DA022605 and HL091911). In addition to Drs. Bale and Halpern, Penn experts include Anand Tekriwal from the College of Arts and Sciences, John Wolf from Neurosurgery and Jeffrey Keating from Neurology. They were joined by colleagues in Psychology at the University of Buffalo.