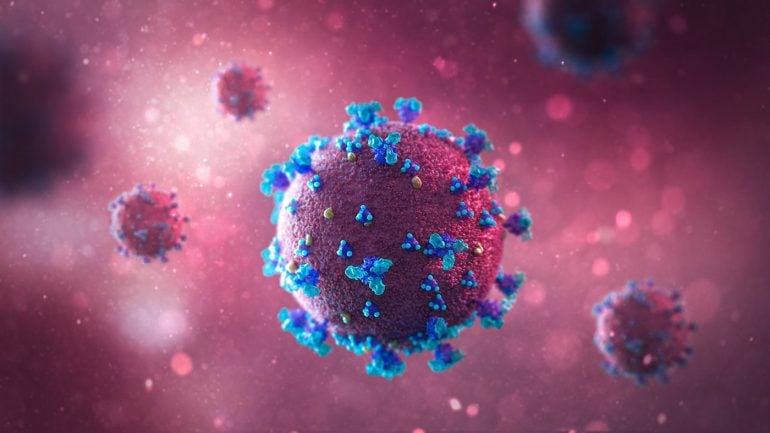 That search quickly revealed mutations in the gene encoding for the Toll-like receptor 7, TLR7 for short. Image is in the public domain.

Summary: Study identifies the TLR7 gene as an essential player in the immune response against coronavirus infection.

Current observations suggest that the coronavirus SARS-CoV-2 causes severe symptoms mainly in elderly patients with chronic disease. However when two pairs of previously healthy young brothers from two families required mechanical ventilation at the intensive care unit in rapid succession, doctors and researchers at Radboud University Medical Center were inclined to consider that genetic factors had a key role in compromising their immune system. Their research identified the gene TLR7 as an essential player in the immune response against SARS-CoV-2. A finding with potentially major consequences for understanding and possibly treatment of COVID-19.

During the wave of COVID-19 patients that flooded Dutch hospitals in the first half of 2020, two young brothers became seriously ill with the SARS-CoV-2 virus and had to be mechanically ventilated in the ICU. One of them died from the consequences of the infection, the other recovered. The severe course of disease in otherwise healthy young brothers was a relatively rare occurrence, especially because the virus mainly affects the elderly. This observation triggered the curiosity of an attentive physician from the MUMC+ department of clinical genetics. She contacted her colleagues in Nijmegen who then investigated why these two young brothers were so severely affected.

“In such a case, you immediately wonder whether genetic factors could play a role,” says geneticist Alexander Hoischen. “Getting sick from an infection is always an interplay between—in this case—the virus and the human immune system. It may be a mere coincidence that two brothers from the same family become so severely ill. But it is also possible that an inborn error of the immune system has played an important role. We investigated this possibility, together with our multidisciplinary team at Radboudumc.”

All genes (collectively called the exome) of both brothers were sequenced, after which the investigators combed through the data searching for a possible shared cause. Cas van der Made, Ph.D. student and resident at the department of Internal Medicine: “We mainly looked at genes that play a role in the immune system. We know that several of these genes are located on the X-chromosome, and with two brother pairs affected X-chromosomal genes were most suspicious. Women carry two X-chromosomes, while men possess a Y-chromosome apart from the X. Therefore, men have only one copy of the X-chromosomal genes. In case men have a defect in such a gene, there is no second gene that can take over that role, as in women.”

That search quickly revealed mutations in the gene encoding for the Toll-like receptor 7, TLR7 for short. There are multiple TLR-genes, which belong to a family of receptors with an important role in the recognition of pathogens (such as bacteria and viruses) and the activation of the immune system. Hoischen: “A few letters were missing in the genetic code of the TLR7 gene. As a result, the code cannot be read properly and hardly any TLR7 protein is produced. TLR7 function has so far never been associated with an inborn error of immunity. But unexpectedly we now have an indication that TLR7 is essential for protection from this coronavirus. So it seems that the virus can replicate undisturbed because the immune system does not get a message that the virus has invaded. Because TLR7, which must identify the intruder and subsequently activate the defense, is hardly present. That could be the reason for the severity of the disease in these brothers.”

Then, quite unexpectedly, the doctors and researchers at Radboudumc come across another pair of brothers who have fallen seriously ill with COVID-19. Again, they are both under 35 years of age. Both of them were also in the ICU for mechanical ventilation. “Then the question of the role of genetics became even more obvious.” says Hoischen. “We also investigated the genetic code of these two brothers, again via the ‘rapid-clinical exome’ method. This time we saw no deletion, no loss of letters, but a single spelling mistake of one DNA-letter of the TRL7 gene. The effect on the gene is the same, however, because these brothers also do not make sufficient functional TLR7 protein. Suddenly we had four young people with a defect in the same gene, all of whom had fallen seriously ill from the SARS-CoV-2 virus.”

Essential role in the defense

Van der Made and colleagues have investigated the consequences of improper functioning of the TLR7 receptor. “Once activated, TLR7 triggers the production of so-called interferons, signaling proteins that are essential in the defense against virus infections,” says van der Made. “This immune response is perhaps all the more important in the fight against the SARS-CoV-2 virus, because we know from the literature that the virus has tricks to reduce the production of interferons by immune cells. When we mimic an infection with the coronavirus, we see that immune cells of the patients without properly functioning TLR7 hardly respond, and that minimal amounts of interferons are produced. These tests make it clear that the virus appears to have free rein in people without properly functioning TLR7 because it [the virus] is not recognized by the immune system.”

“Due to the serious illness of four brothers in two families, so serious that it cost one of the young men his life, we have discovered this condition,” says Hoischen. “It seems to be a very specific abnormality, an immunodeficiency, which is mainly related to this coronavirus. None of the four men have previously suffered from immune-related diseases. It is the first time that we can connect a clinical phenomenon so strongly with TLR7.”

“This discovery not only provides us with more insight into the fundamental workings of the immune system, but it may also have important consequences for the treatment of severely ill COVID-19 patients,” says Frank van de Veerdonk, immunologist and infectiologist. “The substance interferon can be given as a therapy. It is currently being investigated whether administering interferon in COVID-19 can indeed help.”

Presence of Genetic Variants Among Young Men With Severe COVID-19

Objective
To explore the presence of genetic variants associated with primary immunodeficiencies among young patients with COVID-19.

Design, Setting, and Participants
Case series of pairs of brothers without medical history meeting the selection criteria of young (age <35 years) brother pairs admitted to the intensive care unit (ICU) due to severe COVID-19. Four men from 2 unrelated families were admitted to the ICUs of 4 hospitals in the Netherlands between March 23 and April 12, 2020. The final date of follow-up was May 16, 2020. Available family members were included for genetic variant segregation analysis and as controls for functional experiments.

Main Outcome and Measures
Results of rapid clinical whole-exome sequencing, performed to identify a potential monogenic cause. Subsequently, basic genetic and immunological tests were performed in primary immune cells isolated from the patients and family members to characterize any immune defects.

Results
The 4 male patients had a mean age of 26 years (range, 21-32), with no history of major chronic disease. They were previously well before developing respiratory insufficiency due to severe COVID-19, requiring mechanical ventilation in the ICU. The mean duration of ventilatory support was 10 days (range, 9-11); the mean duration of ICU stay was 13 days (range, 10-16). One patient died. Rapid clinical whole-exome sequencing of the patients and segregation in available family members identified loss-of-function variants of the X-chromosomal TLR7. In members of family 1, a maternally inherited 4-nucleotide deletion was identified (c.2129_2132del; p.[Gln710Argfs*18]); the affected members of family 2 carried a missense variant (c.2383G>T; p.[Val795Phe]). In primary peripheral blood mononuclear cells from the patients, downstream type I interferon (IFN) signaling was transcriptionally downregulated, as measured by significantly decreased mRNA expression of IRF7, IFNB1, and ISG15 on stimulation with the TLR7 agonist imiquimod as compared with family members and controls. The production of IFN-γ, a type II IFN, was decreased in patients in response to stimulation with imiquimod.

Conclusions and Relevance
In this case series of 4 young male patients with severe COVID-19, rare putative loss-of-function variants of X-chromosomal TLR7 were identified that were associated with impaired type I and II IFN responses. These preliminary findings provide insights into the pathogenesis of COVID-19.