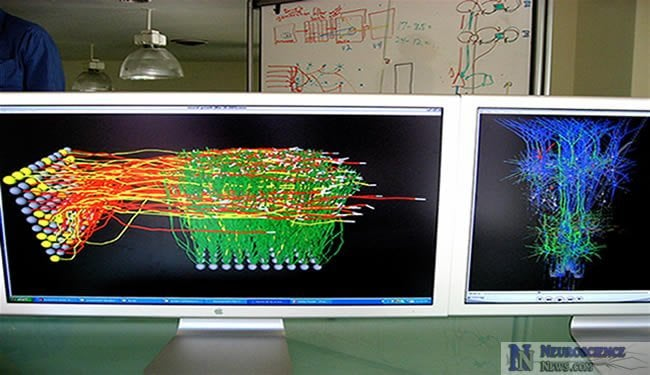 Computational neuroscience research has provided new information about Multiple Sclerosis that could lead to better drugs to help patients with MS.

Computational models of axonal properties suggest that problems associated with MS, and other demyelinating diseases, may be due more to an imbalance between sodium channels and potassium channels that play a role in the leak current in neuronal membranes, than to the currently targeted sodium channels of most MS drugs.

These findings could pave the way for better treatments for patients suffering from Multiple Sclerosis. A further breakdown of this computational neuroscience research is available in the article below.

Scientists are closer to solving one of the many mysteries of multiple sclerosis and other demyelinating diseases, thanks to a recent study conducted at the Salk Institute for Biological Studies. The research revealed a previously unknown connection between two ion channels, which, when misaligned, can cause the many bizarre symptoms that characterize the condition.

The findings, reported in this week’s online edition of the Proceedings of the National Academy of Sciences (PNAS), provide fresh insights into the mechanisms underlying MS and suggest a novel target for therapeutic intervention.

“Our findings offer an avenue of hope for the many millions of MS patients,” explains Howard Hughes Medical Institute investigator Terrence J. Sejnowski, professor and head of the Salk Institute’s Computational Neurobiology Laboratory, who led the study. “We’ve discovered a new target that could be efficacious. This particular pathway or ion channel is a key player in this disease, and we think that manipulating it could have a huge benefit for people suffering from MS.”

Multiple sclerosis affects an estimated 400,000 Americans and more than 2.5 million people worldwide. A chronic, often disabling disease that attacks the central nervous system, it is responsible for a baffling range of neurological symptoms, including numbness, tingling, muscle weakness, paralysis, and vision loss.

It is thought to result when the immune system attacks the myelin sheath that insulates axons, the nerve fibers that conduct electrical impulses to and from the brain and between neurons within the brain. Ordinarily, the myelin speeds up the signals the axons transmit, called action potentials.

When axons lose their insulation, however, either signal conduction fails because the demyelinated axons are unable to generate an impulse, resulting in a loss of sensation, weakness, or blindness, or the axons become hyperexcitable and overcompensate by firing even in the absence of an input, causing twitching.

The first computer model of axonal transmission, developed in the 1950s for the giant axon of the squid, which lacks myelin, tracked positively charged sodium and potassium ions, whose movements across the neuronal membrane generate the necessary electrical signals. Building on that model, Sejnowski and his team included myelin in their own model, then demyelinated one of the sections and incorporated all the changes known to take place as a result.

“It’s been known for a long time that the two most important ions in the axon are sodium and potassium,” says Sejnowski. “What we did was use a program that can model every part of the axon by breaking it into little segments so we could we keep track of the ions going in and out of each segment. And what we found really surprised us.”

The vast majority of prior clinical studies had focused on the sodium channel, which is responsible for initiating the action potential, and many of the targets for MS drugs likewise focus on the sodium channel. While enhancing the sodium current did boost the signal in Sejnowki’s model, to everyone’s amazement, it was the ratio of densities between the sodium channel and a previously ignored but ubiquitous voltage-insensitive potassium current called the leak current, which sets the ground state of the neuron, that determines whether neurons can fire properly.

“Trying to influence the balance between the two ion channels is a completely new approach, and drugs that target leak currents could be as important as those targeting the sodium current,” adds Sejnowski. “I think we have a good chance at some point to help MS patients. The first step is to understand what’s going on.”

“Our model offers a novel explanation for many of the peculiar and intermittent symptoms that MS patients experience,” says first author Jay S. Coggan, who had studied leak channels in previous work. “The injured axon is continually struggling to maintain order within a functional range. There is danger to the right and left. A variety of perturbations can nudge the axon one way or the other. It makes sense that leak channels might participate in these changes.”

In some instances, for example, their symptoms worsen if they are too warm, but improve if they are cooled off-a phenomenon that correlates to the fact that these channels are temperature-dependent. “If a patient is near one of the boundaries and only marginally ‘safe,’ heating up could cause him or her to cross into the failure zone,” Coggan adds. Temperature, therefore, hints at which boundary the patient is approaching.

Beyond MS and demyelinating diseases, insights into the sodium/leak current have applications to intractable pain-a field that Sejnowski’s group will be investigating next.

In addition to Sejnowski, Coggan and Thomas Bartol of the Salk Institute, Steve Prescott, an assistant professor in the Department of Neurology at the University of Pittsburgh contributed to the study.

The work was funded by the Howard Hughes Medical Institute.

About the Salk Institute for Biological Studies:

The Salk Institute for Biological Studies is one of the world’s preeminent basic research institutions, where internationally renowned faculty probe fundamental life science questions in a unique, collaborative, and creative environment. Focused both on discovery and on mentoring future generations of researchers, Salk scientists make groundbreaking contributions to our understanding of cancer, aging, Alzheimer’s, diabetes and infectious diseases by studying neuroscience, genetics, cell and plant biology, and related disciplines.

Faculty achievements have been recognized with numerous honors, including Nobel Prizes and memberships in the National Academy of Sciences. Founded in 1960 by polio vaccine pioneer Jonas Salk, M.D., the Institute is an independent nonprofit organization and architectural landmark.