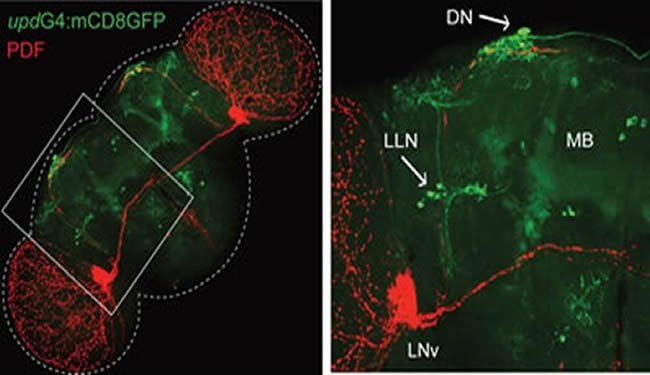 The molecular pathway that carries time-of-day signals from the body’s internal clock to ultimately guide daily behavior is like a black box, says Amita Sehgal, PhD, the John Herr Musser Professor of Neuroscience and Co-Director, Comprehensive Neuroscience Center, at the Perelman School of Medicine, University of Pennsylvania.

Now, new research from the Sehgal lab is taking a peek inside, describing a molecular pathway and its inner parts that connect the well-known clock neurons to cells governing rhythms of rest and activity in fruit flies. Sehgal is also an investigator with the Howard Hughes Medical Institute.

The other co-author on the study is Wenyu Luo, PhD, a Penn doctoral student who recently defended her dissertation. The findings, which will be featured on the cover of the February 17th issue of Cell, are published online this week.

“Most colleagues would say that we have some understanding of how the clock works and how it is synchronized with light,” says Sehgal. “But we are just beginning to get a glimpse of how the clock drives behavior in the rest of an organism’s systems.”

Normally, flies have a robust rhythm of being active during daylight hours and quiet during the night. Sehgal and Luo essentially found that a microRNA (miRNA) named miR-279 acts through the JAK/STAT pathway to regulate locomotor activity rhythms through a daily cycling of proteins.

An miRNA is a tiny piece of RNA – a little over 20 bases (DNA building blocks) in length — that binds to matching pieces of messenger RNA, thereby tying it up and decreasing the production of the corresponding protein.

They found that in mutant flies in which miR-279 was either overexpressed or deleted — causing high levels or low levels of JAK/STAT signaling — the flies wake and sleep at random intervals. The flies showed no discernible pattern of activity. Therefore, the investigators concluded that a mid-range level of JAK/STAT activity is necessary to maintain the flies’ normal pattern. In fact, they found that STAT activity displays a daily rhythm.

Part of the Clock Circuitry

Oscillations of the clock protein PERIOD are normal in clock pacemaker neurons lacking miR-279, suggesting that miR-279 acts downstream of the clock neurons. The team identified the JAK/STAT partner, a protein called Upd, as a target of miR-279. They also showed that knocking down Upd rescues the off-rhythm behavior of the miR-279 mutant flies.

In addition, in brains of mutant flies stained to identify circadian proteins, they found that the central clock neurons project their axons into the vicinity of Upd-expressing neurons, providing a possible physical connection by which the central clock could regulate JAK/STAT signaling to control rest and activity rhythms.

With these findings, the team proposed a model in which the central clock affects the cycle of secretion of the Upd protein from cells. “Upd may act like a time-release capsule,” explains Sehgal. “To maintain a typical rest:activity rhythm, the level of Upd has to be just right.”

Brain Wrinkles and Folds Matter: Researchers Are Studying the Mechanics of How They Form

The mRNA levels of Upd in neurons are kept low by miR-279. Upd may rhythmically activate a receptor, Dome, in a third cell, which would lead to daily oscillations of JAK/STAT activity and ultimately to the rest:activity rhythm.

The direct clinical implications of knowing the players in this complicated pathway are not yet clear. But we might be able to conclude, suggests Sehgal, that, if these mechanisms are conserved in humans, then disorders in which the JAK-STAT pathway isn’t working properly, as in some immune disorders, physicians might also see problems with patients’ sleep-wake cycle.

These findings also provide researchers with a handle on the neural circuit that generates rest:activity behavior in Drosophila. The ultimate goal of many neurobiologists is to trace the entire molecular and cellular pathway that produces a specific behavior. This study is a step towards that goal.