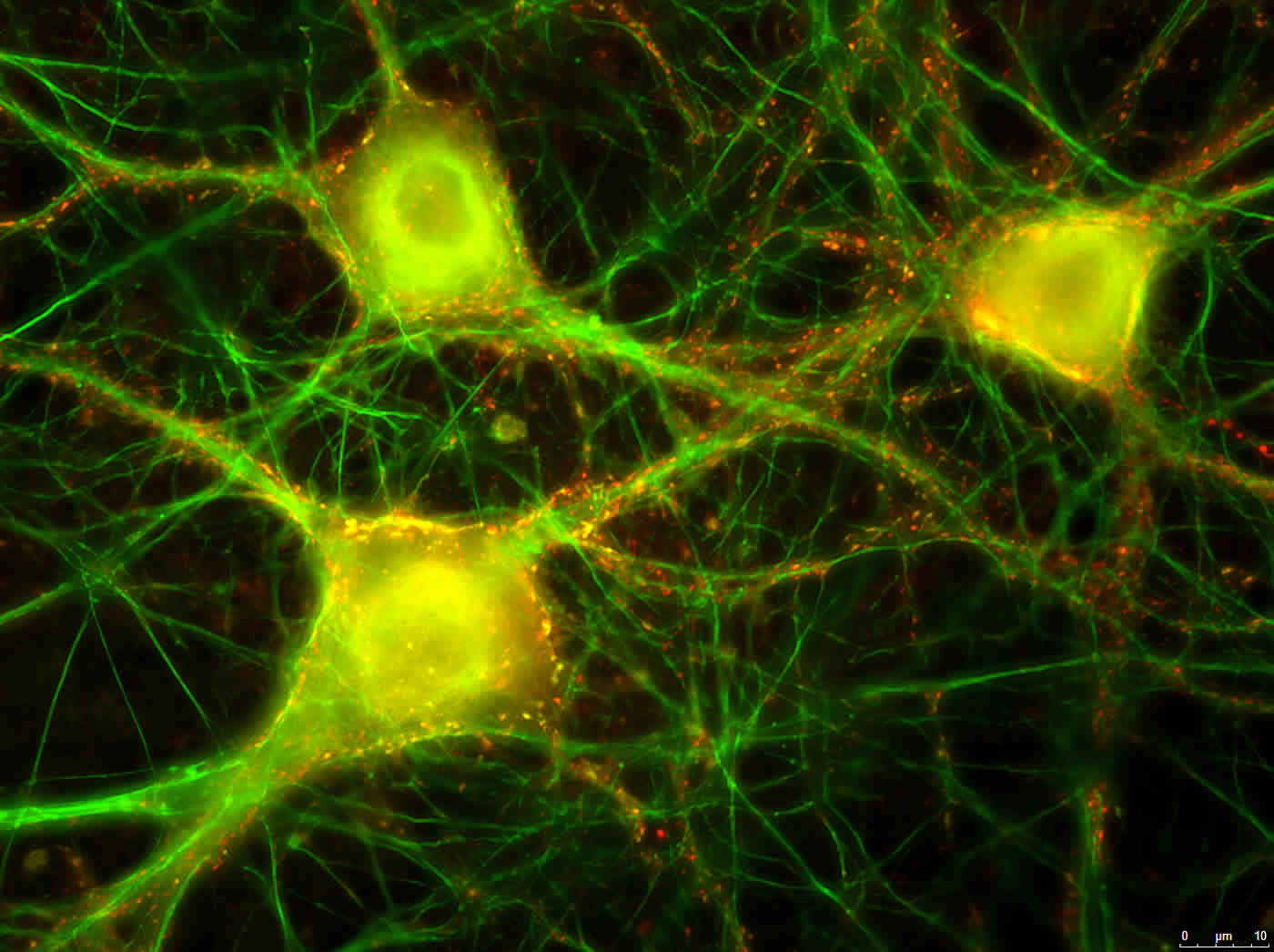 A magnification showing a neuronal culture. Visible in green are neurons. The yellow and red dots show the localization of the SV2 receptor that is used by the botulinum neurotoxins for the uptake into the neurons. NeuroscienceNews.com image is credited to Stephen Jenkinson, Institute for Infectious Diseases.

Summary: A new method of growing neural networks from stem cells is capable of detecting the activity of Clostridium botulinum neurotoxins and could help to minimize animal research.

Scientists at the Institute for Infectious Diseases, University of Bern have developed an in vitro stem cell-based bioassay grown on multi-electrode arrays capable of detecting the biological activity of Clostridium botulinum neurotoxins. Their assay could serve in minimizing animal experiments as well as provide a physiological relevant platform for drug-screening of neuroactive compounds.

The Clostridium botulinum neurotoxins (BoNTs), produced by the Gram-positive bacterium Clostridium botulinum, are the most poisonous naturally-occurring protein toxins known to date. However, when applied in small quantities, the toxin causes a locally-confined paralysis, which is beneficial in the treatment of various diseases such as different forms of dystonia, hyperhidrosis, strabismus, chronic pain and headaches. Currently, it is most widely used in aesthetic treatmet for the smoothing of wrinkles and frown lines – an application that has seen an enormous increase in use over the last few decades.

These toxins are natural products and produced by bacteria, therefore pharmaceutical batch-to-batch variations in concentration and activity occur. However, since the toxins e.g. Botox® are approved by the national regulatory authorities as pharmaceuticals, the safety for the patients has to be guaranteed by batch testing of the final product. Currently, the potency of biologically-active BoNT is monitored by intoxicating mice in so called mouse biosassay (MBA) that was introduced in the 1920s. In this assay, different dilutions of preparations containing BoNT are injected into mice and symptoms of paralysis are observed for several hours up to days.

Due to the enormous demand for pharmaceutical products containing BoNT, it is estimated that in the USA and Europe, annually more than 600,000 mice are sacrificed for these batch tests. This large amount of animals and suffering causes considerable ethical concerns. Therefore, there is a high demand for the replacement of the MBA.

In response to this high demand, a novel in vitro assay as an alternative to the widely used in vivo MBA has been developed by Stephen Jenkinson a PhD student in the lab of Prof. Dr. med. Stephen Leib at the Institute for Infectious Diseases in collaboration with the Department of Physiology , both at the University of Bern and with the Spiez Laboratory, Swiss Federal Office for Civil Protection.

In the sudy the researchers demonstrated that neurons differentiated in vitro from mouse embryonic stem cells cultured on multi-electrode arrays (MEAs) can serve as a physiologically relevant cell-based method for detecting BoNT/A holotoxin and complex. The neuronal cultures formed functional networks composed of a heterogeneous mixture of excitatory and inhibitory neurons and upon treatment for 24 hours with ~ 1 pM BoNT/A holotoxin or Botox® a complete silencing of synaptic transmission was observed.

“Detection and quantification of BoNTs in pharmaceutical preparations is extremely challenging due to a multistep mechanism of cellular intoxication and the high potency of the toxins”, says Stephen Jenkinson, first author of the study. To date, neuronal cell-based methods are the only in vitro alternative to the MBA and several assays have been developed using primary or embryonic stem cell derived neurons that show similar or even greater sensitivity than the MBA. However, most of these assays rely on destructive homogenization of tissue to allow BoNT quantification and assessment thus requiring additional methods and further hands-on time to yield a result. “In addition, these methods do not allow a continuous monitoring of neuronal activity upon treatment with BoNTs”, adds Stephen Leib.

The main advantage of this assay is the usage of stem cell derived neurons, thus making the usage of animals obsolete. Further, MEA recording techniques allow for a continuous non-invasive monitoring of neuronal activity and this approach can be easily up-scaled to meet the requirements for a prospective high-throughput screening of neuroactive compounds. “In addition, the usage of commercially available MEA systems do not require highly trained staff”, says Jenkinson.

Though the presented assay holds a high sensitivity down to 1 pM of BoNT/A, further research has to be conducted in increasing the overall sensitivity. However, Stephen Jenkinson and Stephen Leib believe that the novel bioassay holds great potential to reduce animal use for BoNT detection and activity determination in pharmaceuticals. In addition, the assay can be expanded for the drug-screening of possible neuroactive compounds with an emphasis on synaptic activity. The study has now been published in Frontiers in Pharmacology.

Clostridium botulinum neurotoxins (BoNTs) are the most poisonous naturally occurring protein toxins known to mankind and are the causative agents of the severe and potentially life-threatening disease botulism. They are also known for their application as cosmetics and as unique bio-pharmaceuticals to treat an increasing number of neurological and non-neurological disorders. Currently, the potency of biologically active BoNT for therapeutic use is mainly monitored by the murine LD50-assay, an ethically disputable test causing suffering and death of a considerable number of mice. The aim of this study was to establish an in vitro assay as an alternative to the widely used in vivo mouse bioassay. We report a novel BoNT detection assay using mouse embryonic stem cell-derived neurons (mESN) cultured on multi-electrode arrays (MEAs). After 21 days in culture, the mESN formed a neuronal network showing spontaneous bursting activity based on functional synapses and express the necessary target proteins for BoNTs. Treating cultures for 6 h with 16.6 pM of BoNT serotype A and incubation with 1.66 pM BoNT/A or 33 Units/ml of Botox® for 24 h lead to a significant reduction of both spontaneous network bursts and average spike rate. This data suggests that mESN cultured on MEAs pose a novel, biologically relevant model that can be used to detect and quantify functional BoNT effects, thus accelerating BoNT research while decreasing animal use.