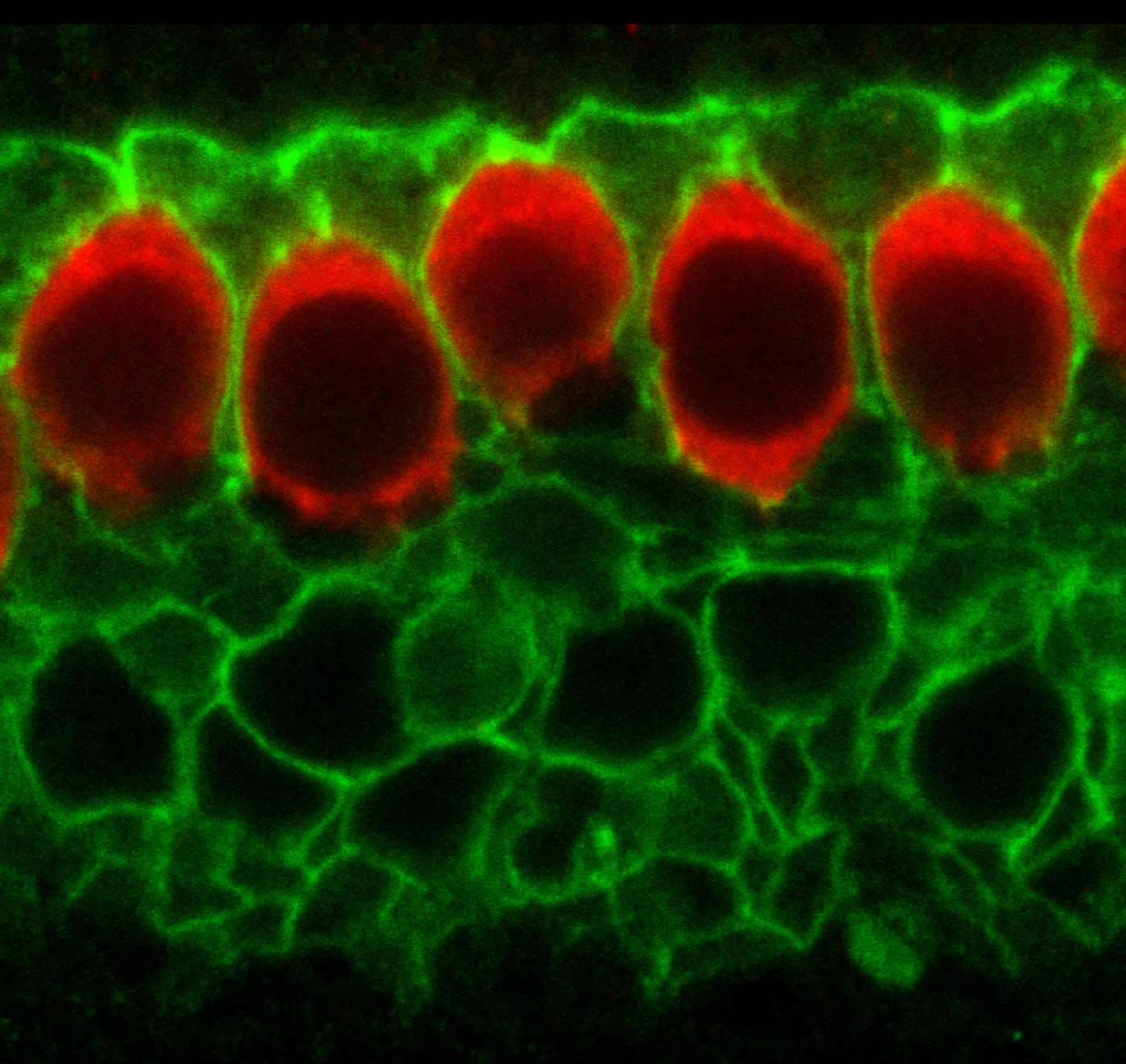 How Cells in the Developing Ear Practice Hearing

Before the fluid of the middle ear drains and sound waves penetrate for the first time, the inner ear cells of newborn rodents practice for their big debut. Researchers at Johns Hopkins report they have figured out the molecular chain of events that enables the cells to make “sounds” on their own, essentially “practicing” their ability to process sounds in the world around them.

The researchers, who describe their experiments in the Dec. 3 edition of the journal Cell, show how hair cells in the inner ear can be activated in the absence of sound. “The multistep process we uncovered reminds me of a Rube Goldberg invention,” says Dwight Bergles, Ph.D., professor of neuroscience at the Johns Hopkins University School of Medicine, a reference to Goldberg’s construction of complicated gadgets to perform seemingly simple tasks. “Cells in the inner ear exploit a system used for fluid secretion in other organs to simulate the effect of sound before hearing begins, preparing them for the real deal.”

Normal hearing in most mammals, Bergles says, is a multistep process that begins with sound waves hitting the ear drum, which transfers energy to the air-filled middle ear and its three tiny bones. Then the fluid in the inner ear vibrates at a corresponding electrical frequency, which bends the “antennas” of just the right “hair cells,” causing them to release chemical messengers that tell nearby nerves to fire. That signal then travels to the brain, where it is interpreted as a particular sound.

Scientists, Bergles says, already knew that hair cells and nearby “supporting” cells in the developing inner ear show synchronous bursts of activity that are triggered by release of the “energy” chemical ATP, which is also used as a potent communication signal. This activity is then conveyed to the brain in the same way that sound-evoked information is, leading to burst firing of neurons in different auditory centers of the brain. What was unknown was how ATP activates hair cells.

To find out, Bergles and his team homed in on biochemical elements of the system and found that chloride ion channels in the supporting cells seemed crucial. They knew that ATP triggers a rise in calcium levels inside supporting cells, so they guessed that the calcium was the cue for a calcium-activated chloride channel to open.

Further biochemical tests, combined with electrical recordings and imaging of calcium changes in the inner ears of mice, allowed the team to piece together a full chain of events. First, supporting cells release ATP, leading to self-stimulation of their own ATP receptors, triggering an increase in calcium levels inside the cells. This rise in calcium opens the TMEM16A channels to let chloride out, which also drags potassium ions and water out. The potassium that is released during these events activates the hair cells, stimulating the nerve cells with which they have formed weak connections.

It’s this pairing, says Bergles, that is thought to stabilize connections that help the brain make sense of sounds. “This step happens during the first two weeks after birth in mice and rats, when the middle ear is still filled with fluid and outside sounds can’t reach the inner ear.”

He adds: “The hair cells are arranged in a line and respond to different frequencies based on their location, like keys on a piano. Their connection with nearby nerve cells is strengthened every time a hair cell is activated and causes its partner nerve cell to fire.” When the brain receives a signal from hair cells near the entrance of the inner ear, he says, it “hears” a high-pitched sound; when the signal comes from farther in, it “hears” a deeper sound.

“There’s a beauty to this seemingly overly complex process,” Bergles says. “It uses the capabilities of the cells in a novel way to trigger nerve cell activity. We think this helps establish and refine the connections between ear and brain so that the animals can properly hear sounds as soon as they are exposed to them.”

Because mice can’t tell researchers if they are hearing anything, researchers can only surmise that they do based on activity they record in the auditory centers of the brain. Bergles says their research suggests that these “sounds” might be perceived as single tones played in succession, something like tests of an emergency response system. He says that the self-made sounds are for the ear what a batting machine is for a baseball player. “The machines don’t have all the richness and unpredictability of a pitcher throwing a ball, but they nevertheless help players prepare for the big event.”

Although this self-stimulation process disappears after hearing begins, Bergles says that if this pathway were reactivated following injury, it could lead to tinnitus, or “ringing” in the ear. Further understanding of this early signaling, he says, may lead to new strategies for improving the integration and performance of cochlear implants and speeding recovery from sound-induced trauma.

About this auditory neuroscience research

Other authors of the report include Han Chin Wang, Chun-Chieh Lin, Rocky Cheung, YingXin Zhang-Hooks and Amit Agarwal of the Johns Hopkins University School of Medicine; Graham Ellis-Davies of the Icahn School of Medicine at Mount Sinai; and Jason Rock of the University of California, San Francisco.