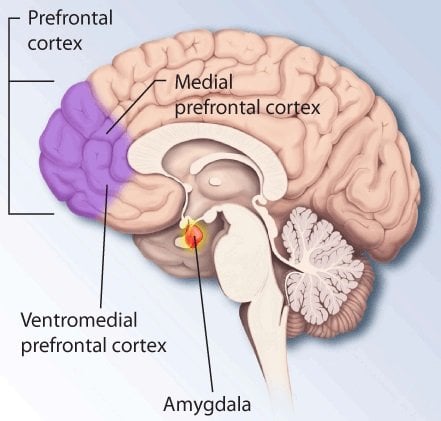 Current diagnostics for PTSD rely on subjective measures and patient recall, making it difficult to accurately diagnose the condition or discern its symptoms from those of depression and anxiety. The PTSD brain image is credited to the NIMH and shows the areas of the brain associated with fear and stress.
Home
Featured

In a first-of-its-kind effort to illuminate the biochemical impact of trauma, researchers at NYU Langone Medical Center have discovered a connection between the quantity of cannabinoid receptors in the human brain, known as CB1 receptors, and post-traumatic stress disorder, the chronic, disabling condition that can plague trauma victims with flashbacks, nightmares and emotional instability. Their findings, which appear online today in the journal Molecular Psychiatry, will also be presented this week at the annual meeting of the Society of Biological Psychiatry in San Francisco.

CB1 receptors are part of the endocannabinoid system, a diffuse network of chemicals and signaling pathways in the body that plays a role in memory formation, appetite, pain tolerance and mood. Animal studies have shown that psychoactive chemicals such as cannabis, along with certain neurotransmitters produced naturally in the body, can impair memory and reduce anxiety when they activate CB1 receptors in the brain. Lead author Alexander Neumeister, MD, director of the molecular imaging program in the Departments of Psychiatry and Radiology at NYU School of Medicine, and colleagues are the first to demonstrate through brain imaging that people with PTSD have markedly lower concentrations of at least one of these neurotransmitters, an endocannabinoid known as anandamide, than people without PTSD. Their study, which was supported by three grants from the National Institutes of Health, illuminates an important biological fingerprint of PTSD that could help improve the accuracy of PTSD diagnoses, and points the way to medications designed specifically to treat trauma.

“There’s not a single pharmacological treatment out there that has been developed specifically for PTSD,” says Dr. Neumeister. “That’s a problem. There’s a consensus among clinicians that existing pharmaceutical treatments such as antidepressant simple do not work. In fact, we know very well that people with PTSD who use marijuana—a potent cannabinoid—often experience more relief from their symptoms than they do from antidepressants and other psychiatric medications. Clearly, there’s a very urgent need to develop novel evidence-based treatments for PTSD.”

The study divided 60 participants into three groups: participants with PTSD; participants with a history of trauma but no PTSD; and participants with no history of trauma or PTSD. Participants in all three groups received a harmless radioactive tracer that illuminates CB1 receptors when exposed to positron emissions tomography (PET scans). Results showed that participants with PTSD, especially women, had more CB1 receptors in brain regions associated with fear and anxiety than volunteers without PTSD. The PTSD group also had lower levels of the neurotransmitter anandamide, an endocannabinoid that binds to CB1. If anandamide levels are too low, Dr. Neumeister explains, the brain compensates by increasing the number of CB1 receptors. “This helps the brain utilize the remaining endocannabinoids,” he says.
Much is still unknown about the effects of anandamide in humans but in rats the chemical has been shown to impair memory. “What is PTSD? It’s an illness where people cannot forget what they have experienced,” Dr. Neumeister says. “Our findings offer a possible biological explanation for this phenomenon.”

Current diagnostics for PTSD rely on subjective measures and patient recall, making it difficult to accurately diagnose the condition or discern its symptoms from those of depression and anxiety. Biological markers of PTSD, such as tests for CB1 receptors and anandamide levels, could dramatically improve diagnosis and treatment for trauma victims.

Among the 1.7 million men and women who have served in the wars in Iraq and Afghanistan, an estimated 20% have PTSD. But PTSD is not limited to soldiers. Trauma from sexual abuse, domestic violence, car accidents, natural disaster, violent assault or even a life-threatening medical diagnosis can lead to PTSD. The condition affects nearly 8 million Americans annually.

Notes about this neuroimaging and PTSD research

These findings were made possible through the collaborative efforts of researchers at NYU School of Medicine, Yale School of Medicine, Harvard Medical School, the Department of Veterans Affairs National Center for PTSD and the University of California at Irvine.