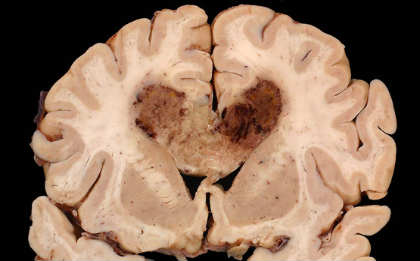 A team of scientists, led by principal investigator Paul S. Mischel, MD, a member of the Ludwig Institute for Cancer Research and professor in the Department of Pathology at the University of California, San Diego School of Medicine, has found that brain cancer cells resist therapy by dialing down the gene mutation targeted by drugs, then re-amplify that growth-promoting mutation after therapy has stopped.

The findings are published in the December 5, 2013 online issue of Science.

“This discovery has considerable clinical implications because if cancer cells can evade therapy by a ‘hide-and-seek’ mechanism, then the current focus (of drug therapies) is unlikely to translate into better outcomes for patients,” said Mischel.

In recent years, new cancer therapies have emerged that target tell-tale gene mutations to identify specific cancer cells for destruction. Unfortunately, a variety of “resistance mechanisms” have also emerged, among them incomplete target suppression, second-site mutations and activation of alternative kinases or enzymes that maintain growth-promoting signals to the cancer itself.

“Most research is aimed at developing better drugs or better drug combinations to suppress these downstream signals,” Mischel said. “However, one thing that has not been carefully considered is whether cancer cells can modulate the levels of – and thus their dependence on – the target of the drug, evade therapy, and then re-acquire the oncogene to promote tumor growth when the drug is withdrawn.”

Mischel and colleagues, including Webster K. Cavenee, PhD, and Frank B. Furnari, PhD, of the Ludwig Institute and the UC San Diego School of Medicine, investigated the behavior of glioblastoma multiforme (GBM), the most common malignant primary brain cancer in adults. More than 9,000 new cases of the disease are diagnosed each year in the United States and effective treatments are limited. The tumors are aggressive and resistant to current therapies, such as surgery, radiation and chemotherapy. The median survival rate for newly diagnosed GBM patients is just 14 months.

GBM is characterized by a mutated variant of the epidermal growth factor receptor known as EGFRvIII that is found on extrachromosomal DNA in cancer cells. EGFRvIII promotes tumor growth. Some new drugs kill cancer cells by specifically suppressing or inhibiting EGFRvIII, but lose effectiveness as drug resistance soon develops.

The researchers found that this resistance may be due to the cancer cells temporarily dumping their extrachromosomal EGFRvIII, which essentially renders them invisible to drugs looking for that particular mutation. When the drug therapy is halted, the EGFRvIII reappears at previous levels and accelerated tumor growth resumes.

“This is, to the best of our knowledge, the first demonstration that reversible loss of an oncogene on extrachromosomal DNA can lead to targeted cancer drug resistance,” said Mischel, who hoped the findings would “shift the discussion about what directions need to be taken to improve the success rate for targeted cancer treatments.”