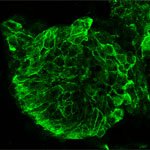 Human glioblastoma multiforme, one of the most common, aggressive and deadly forms of brain cancer, is notoriously difficult to study. Scientists have traditionally studied cancer cells in petri dishes, which have none of the properties of the brain tissues in which these cancers grow, or in expensive animal models.

Now a team of engineers has developed a three-dimensional hydrogel that more closely mimics conditions in the brain. In a paper in the journal Biomaterials, the researchers describe the new material and their approach, which allows them to selectively tune up or down the malignancy of the cancer cells they study.

The new hydrogel is more versatile than other 3-D gels used for growing glioma (brain cancer) cells in part because it allows researchers to change individual parameters – the gel’s stiffness, for example, or the presence of molecular signals that can influence cancer growth – while minimally altering its other characteristics, such as porosity.

Being able to adjust these traits individually will help researchers tease out important features associated with the initial growth of a tumor as well as its response to clinical therapies, said University of Illinois chemical and biomolecular engineering professor Brendan Harley, who led the study with postdoctoral researcher Sara Pedron and undergraduate student Eftalda Becka. Harley is an affiliate of the Institute for Genomic Biology at Illinois.

The researchers found that they could increase or decrease the malignancy of glioma cells in their hydrogel simply by adding hyaluronic acid, a naturally occurring carbohydrate found in many tissues, especially the brain.

Hyaluronic acid (HA) is a key component of the extracellular matrix that provides structural and chemical support to cells throughout the body. HA contributes to cell proliferation and cell migration, and local changes in HA levels have been implicated in tumor growth.

“Hyaluronic acid is one of the major building blocks in the brain,” Harley said. “The structure of a newly forming brain tumor has some of this HA within it, but there’s also a lot of the HA in the brain surrounding the tumor.”

Previous studies have used hydrogels made out of nothing but hyaluronic acid to study gliomas, Harley said. “The problem there is that HA is structurally not very strong.” It also is difficult to adjust the amount of HA that the glioma cells are exposed to if their environment is 100 percent HA, he said.

In the new study, Pedron observed how glioma cells behaved in two different hydrogels – one based on methacrylated gelatin (GelMA) and the other using a more conventional polyethylene glycol (PEG) biomaterial. These two materials vary in one important trait: GelMA is a naturally derived material that contains adhesive sites that allow cells to latch onto it; synthetic PEG does not.

“The purpose of having these two systems was to isolate the effect of HA on glioma cells,” Pedron said. If changing HA levels produced different effects in different gels, that would indicate that the gels were contributing to those effects, she said.

Instead, Harley and Pedron found that additions of HA to glioma cells had “very similar” effects in both materials. Adding too little or too much HA led to reduced malignancy, while incorporating just enough HA led to significantly enhanced malignancy. This held true for multiple types of glioblastoma multiforme cells. This suggests that “it’s the HA itself that is likely the cause for this malignant change,” Harley said.

Why Do We Feel Bad When Our Beliefs Don’t Match Our Actions? Blame ‘Cognitive Dissonance’

“If you have a material that allows you to selectively tune up or down malignancy, that will allow you to ask lots of questions about treatment methods for more malignant or less malignant forms of glioma. It also will allow scientists to try to get a response that’s closer to what you see in the body,” he said.

“If you talk to pathologists, they’ll say a biomaterial will never allow you to grow a full brain tumor, which is probably true,” Harley said. “But it’s realistic to think that a well-designed biomaterial will allow you to study aspects of glioma growth and treatment in a way that’s much richer than simply looking in a petri dish and much more accessible than trying to study tumor development within the brain itself.”

The U. of I. department of chemical and biomolecular engineering, the Institute for Genomic Biology and the Campus Research Board supported this research.