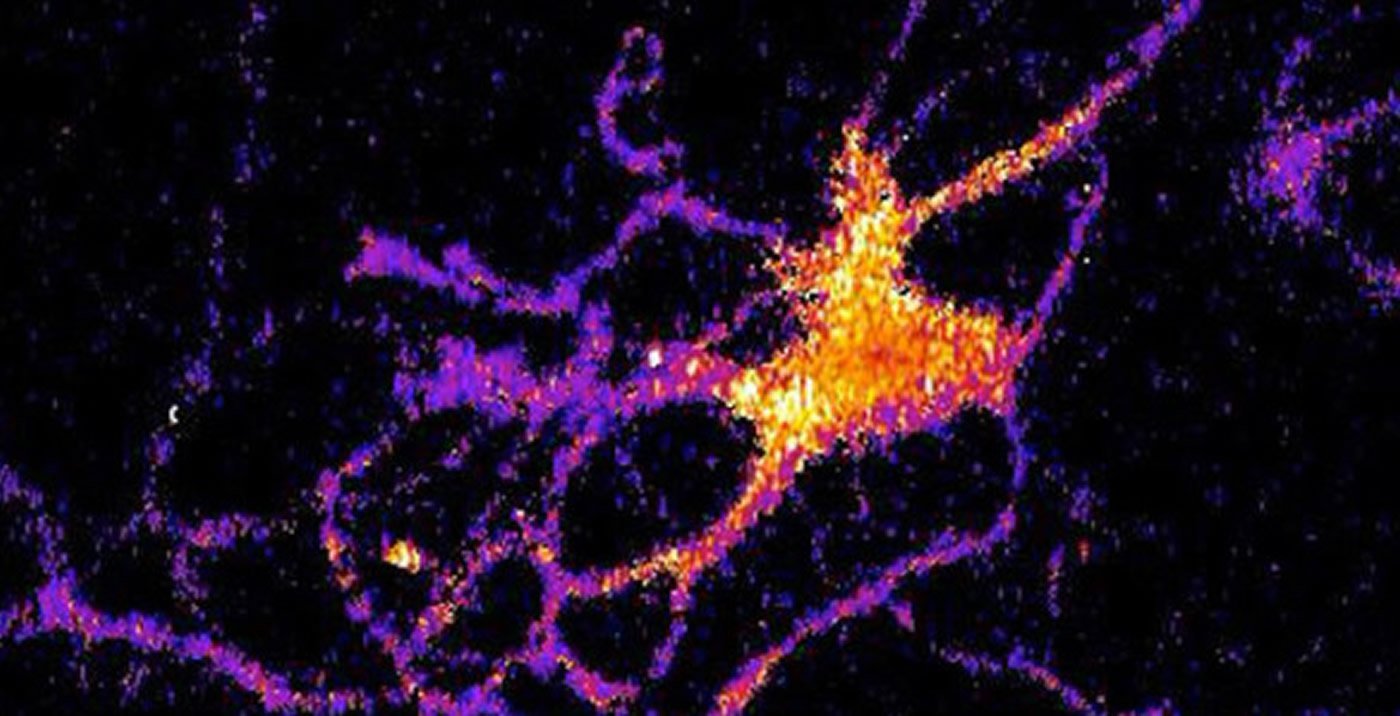 Bioluminescent Sensor Causes Brain Cells to Glow in the Dark

Summary: Researchers have been able to make neurons ‘glow in the dark’ to help measure brain activity.

To measure brain activity, these scientists make neurons glow in the dark.

A new kind of bioluminescent sensor causes individual brain cells to imitate fireflies and glow in the dark.

The probe, which was developed by a team of Vanderbilt scientists, is a genetically modified form of luciferase, the enzyme that a number of other species including fireflies use to produce light. It is described in a paper published in the journal Nature Communications on Oct. 27.

The scientists created the technique as a new and improved method for tracking the interactions within large neural networks in the brain.

“For a long time neuroscientists relied on electrical techniques for recording the activity of neurons. These are very good at monitoring individual neurons but are limited to small numbers of neurons. The new wave is to use optical techniques to record the activity of hundreds of neurons at the same time,” said Carl Johnson, Stevenson Professor of Biological Sciences, who headed the effort.

“Most of the efforts in optical recording use fluorescence, but this requires a strong external light source which can cause the tissue to heat up and can interfere with some biological processes, particularly those that are light sensitive,” he said.

Based on their research on bioluminescence in “a scummy little organism, the green alga Chlamydomonas, that nobody cares much about” Johnson and his colleagues realized that if they could combine luminescence with optogenetics – a new biological technique that uses light to control cells, particularly neurons, in living tissue – they could create a powerful new tool for studying brain activity.

Johnson and his collaborators – Associate Professor Donna Webb, Research Assistant Professor Shuqun Shi, post-doctoral student Jie Yang and doctoral student Derrick Cumberbatch in biological sciences and Professor Danny Winder and postdoctoral student Samuel Centanni in molecular physiology and biophysics – genetically modified a type of luciferase obtained from a luminescent species of shrimp so that it would light up when exposed to calcium ions. Then they hijacked a virus that infects neurons and attached it to their sensor molecule so that the sensors are inserted into the cell interior.

The researchers picked calcium ions because they are involved in neuron activation. Although calcium levels are high in the surrounding area, normally they are very low inside the neurons. However, the internal calcium level spikes briefly when a neuron receives an impulse from one of its neighbors.

They tested their new calcium sensor with one of the optogenetic probes (channelrhodopsin) that causes the calcium ion channels in the neuron’s outer membrane to open, flooding the cell with calcium. Using neurons grown in culture they found that the luminescent enzyme reacted visibly to the influx of calcium produced when the probe was stimulated by brief light flashes of visible light.

To determine how well their sensor works with larger numbers of neurons, they inserted it into brain slices from the mouse hippocampus that contain thousands of neurons. In this case they flooded the slices with an increased concentration of potassium ions, which causes the cell’s ion channels to open. Again, they found that the sensor responded to the variations in calcium concentrations by brightening and dimming.

“We’ve shown that the approach works,” Johnson said. “Now we have to determine how sensitive it is. We have some indications that it is sensitive enough to detect the firing of individual neurons, but we have to run more tests to determine if it actually has this capability.”

Optogenetic techniques allow intracellular manipulation of Ca++ by illumination of light-absorbing probe molecules such as channelrhodopsins and melanopsins. The consequences of optogenetic stimulation would optimally be recorded by non-invasive optical methods. However, most current optical methods for monitoring Ca++ levels are based on fluorescence excitation that can cause unwanted stimulation of the optogenetic probe and other undesirable effects such as tissue autofluorescence. Luminescence is an alternate optical technology that avoids the problems associated with fluorescence. Using a new bright luciferase, we here develop a genetically encoded Ca++ sensor that is ratiometric by virtue of bioluminescence resonance energy transfer (BRET). This sensor has a large dynamic range and partners optimally with optogenetic probes. Ca++ fluxes that are elicited by brief pulses of light to cultured cells expressing melanopsin and to neurons-expressing channelrhodopsin are quantified and imaged with the BRET Ca++ sensor in darkness, thereby avoiding undesirable consequences of fluorescence irradiation.