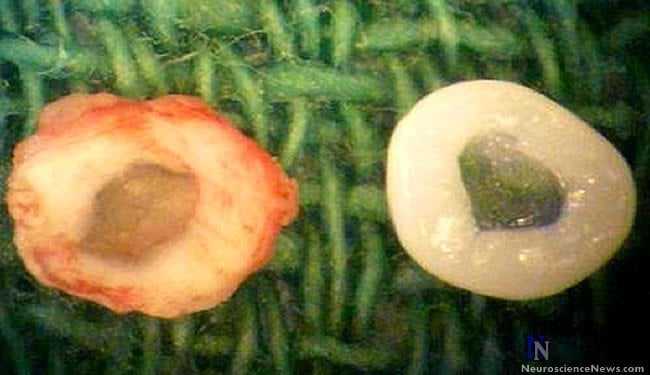 Every year, millions of people contend with lower back and neck discomfort. With intent to ease their pain, Cornell University engineers in Ithaca and doctors at the Weill Cornell Medical College in New York City have created a biologically based spinal implant that could someday spell relief for these countless sufferers.

The other scientists on the paper are Robby Bowles, Cornell Ph.D. ’11, and Harry Gebhard, M.D., of Weill Cornell Medical College.

Their research was published online Aug. 1, 2011 in the Proceedings of the National Academy of Sciences.

Each year, 40 percent to 60 percent of American adults suffer from chronic back or neck pain. For patients diagnosed with severe degenerative disc disease, or herniated discs, neurosurgeons perform surgery called discectomy — removing the spinal disc — followed by a fusion of the vertebrate bones to stabilize the spine. In spite of the surgery, the patient’s back will likely not feel the same as before their injury.

“The surgery prevents pain, but often limits mobility, which may hinder someone who has an active lifestyle or even end the career of a professional athlete,” says Härtl, who is also the team neurosurgeon for the New York Giants.

Human discs look something like a tire, with the outer part, called the annulus, made of a stiff material, and the inner circle, the nucleus, made of a gel-like substance that gets pressurized and bears weight.

Bonassar’s lab, which focuses on the regeneration and analysis of musculoskeletal tissue, engineered artificial discs out of two polymers – collagen, which wraps around the outside, and a hydrogel called alginate in the middle. They seeded the implants with cells that repopulate the structures with new tissue. Remarkably, as opposed to artificial implants today that degrade over time, the scientists are seeing that the implants get better as they mature in the body, due to the growth of the cells.

“Our implants have maintained 70 to 80 percent of initial disc height. In fact, the mechanical properties get better with time,” says Bonassar.

The implants would treat a broad category of illness called degenerative disc disease – a leading cause of disability worldwide. According to Härtl, an increasing number of patients need treatment or surgery from the degeneration of the intervertebral disc. A surgical procedure approved by the FDA in 2005 involves removing the disc completely and replacing it with an implant made of a combination of metal and plastic, with the aim of mimicking the normal movement of the lumbar and spine.

From a biological perspective, the new discs could create a “huge advantage” over traditional implants because of how they integrate and mature with the vertebrae. This major surgery would become less invasive, safer and come with fewer long-term side effects, he says.

The scientists began collaborating on the project in 2006, first funded by an Ithaca-Weill seed grant. Since then, the project has moved into animal testing stages, and it has received several awards and accolades, including a $325,000 grant from Switzerland’s AO Spine foundation and $100,000 in support from NFL Charities.

Notes about this back pain research article