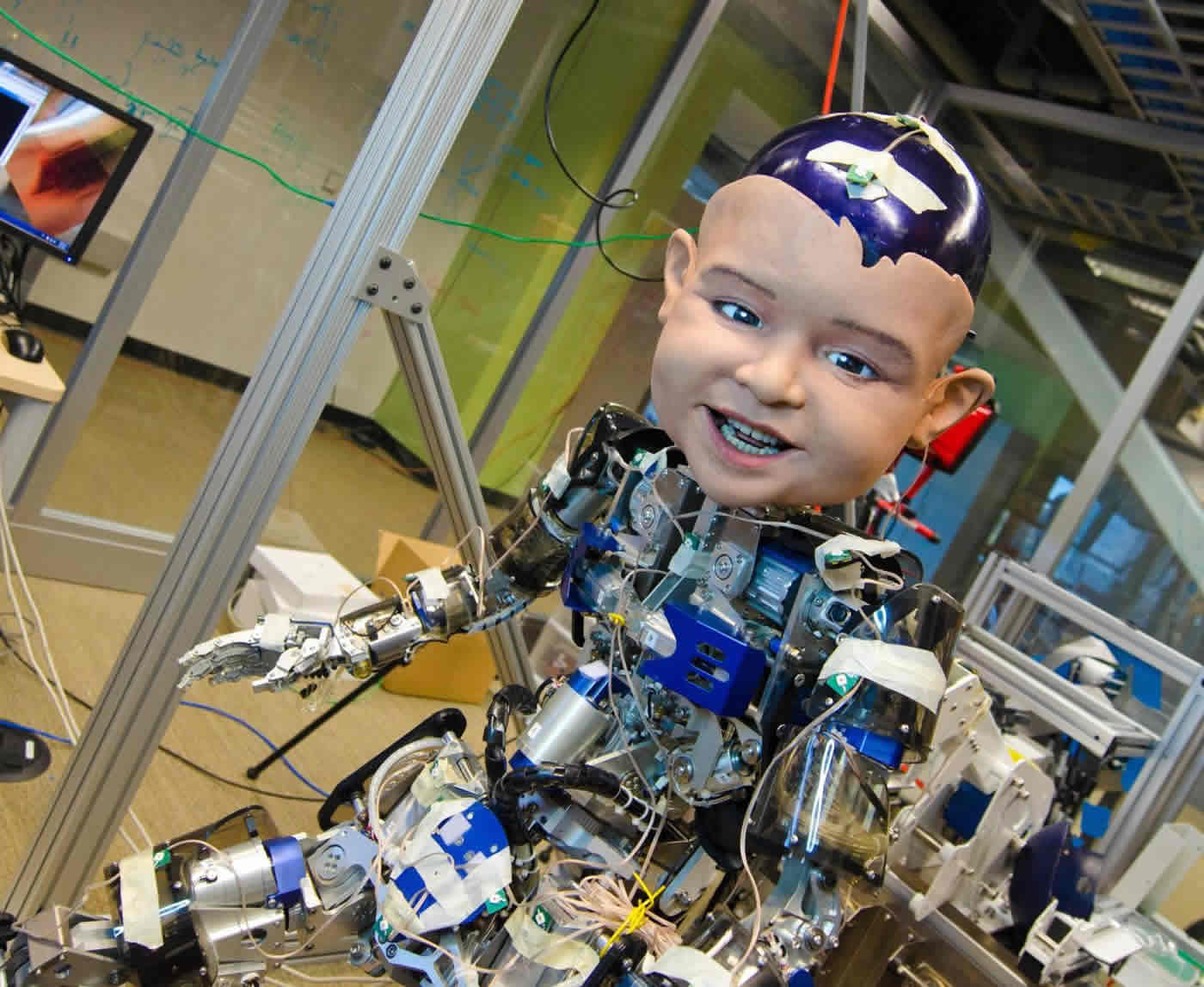 To verify their findings, researchers programmed a toddler-like robot to behave like the babies they studied and had the robot interact with undergraduate students. They obtained the same results: the robot got the undergraduates to smile as much as possible, while smiling as little as possible. Credit: David Hanson/Machine Perception Laboratory.

In addition, babies reach that goal by using sophisticated timing, much like comedians who time their jokes to maximize audience response. But there is a twist: babies seem to be doing this while smiling as little as possible.

Researchers detail their findings in an innovative study that combines developmental psychology, computer science and robotics, an approach that has never been tried before, to the best of the researchers’ knowledge. The study is part of an effort funded by the National Science Foundation to use robots to better understand human development. It gives developmental psychologists a tool for studying non-verbal children and adults, such as those with autism, researchers said.

To verify their findings, researchers programmed a toddler-like robot to behave like the babies they studied and had the robot interact with undergraduate students. They obtained the same results: the robot got the undergraduates to smile as much as possible, while smiling as little as possible.

“If you’ve ever interacted with babies, you suspect that they’re up to something when they’re smiling. They’re not just smiling randomly,” said Javier Movellan, a research scientist in the Machine Perception Laboratory at the University of California, San Diego, and one of the study’s authors. “But proving this is difficult.”

To find out what babies are really up to, researchers turned to optimal control theory, a tool often used in robotics. The method allows researchers to design and program robots to perform a specific behavior based on specific goals. In this study, the researchers used the method to reverse engineer what the babies’ goals were based on their behavior.

Researchers used data from a previous study that observed the face to face interactions of 13 pairs of mothers and infants under the age of four months, including when and how often the mothers and babies smiled. After running the data through their reverse-control theory algorithms, researchers were actually surprised by the findings, said Paul Ruvolo, a professor at Olin College of Engineering and an alumnus of the Jacobs School of Engineering at UC San Diego. “We thought either the babies had no goal or it was about mutual smiling,” he said. Researchers are careful to point out that they can’t determine if the babies are conscious of what they’re doing. “We are not claiming that a particular cognitive mechanism, for instance conscious deliberation, is responsible for the observed behaviors. Our methods are agnostic to this question.” Ruvolo said.

Even though the sample size was small, the findings were statistically strong, said Movellan. The control theory data analysis found that 11 out of the 13 babies in the study showed clear signs of intentional smiling. Movellan and his team have been working for several years to program a realistic humanoid robot. “Our goal was to have human development inform the development of social robots,” said Ruvolo.

So the researchers developed a program that mimicked the babies’ actions and transferred it onto Diego San, a toddler-like robot that Movellan’s team had used for similar studies in the past. Diego San interacted with 32 UC San Diego undergraduates individually during three-minute sessions where it displayed one of four different behaviors. For example, the robot was programmed to smile back every time the undergraduates smiled–a big favorite with the study’s subjects. When Diego San behaved like the babies in the study, the undergraduate students behaved like the babies’ mothers: they smiled a lot even while the robot didn’t have to smile that much.

Study co-author Dan Messinger from the University of Miami, received a grant to model babies’ responses to brief pauses in interaction based on the study’s data.

“What makes our study unique is that previous approaches to studying infant-parent interaction essentially describe patterns,” said Messinger. “But we couldn’t say what the mother or infant is trying to obtain in the interaction. Here we find that infants have their own goals in the interaction, even before four months of age.”

Movellan will present a demonstration of related work Oct. 30 at the Contextual Robotics Forum at the Jacobs School of Engineering at UC San Diego.

Infants Time Their Smiles to Make Their Moms Smile

One of the earliest forms of interaction between mothers and infants is smiling games. While the temporal dynamics of these games have been extensively studied, they are still not well understood. Why do mothers and infants time their smiles the way they do? To answer this question we applied methods from control theory, an approach frequently used in robotics, to analyze and synthesize goal-oriented behavior. The results of our analysis show that by the time infants reach 4 months of age both mothers and infants time their smiles in a purposeful, goal-oriented manner. In our study, mothers consistently attempted to maximize the time spent in mutual smiling, while infants tried to maximize mother-only smile time. To validate this finding, we ported the smile timing strategy used by infants to a sophisticated child-like robot that automatically perceived and produced smiles while interacting with adults. As predicted, this strategy proved successful at maximizing adult-only smile time. The results indicate that by 4 months of age infants interact with their mothers in a goal-oriented manner, utilizing a sophisticated understanding of timing in social interactions. Our work suggests that control theory is a promising technique for both analyzing complex interactive behavior and providing new insights into the development of social communication.