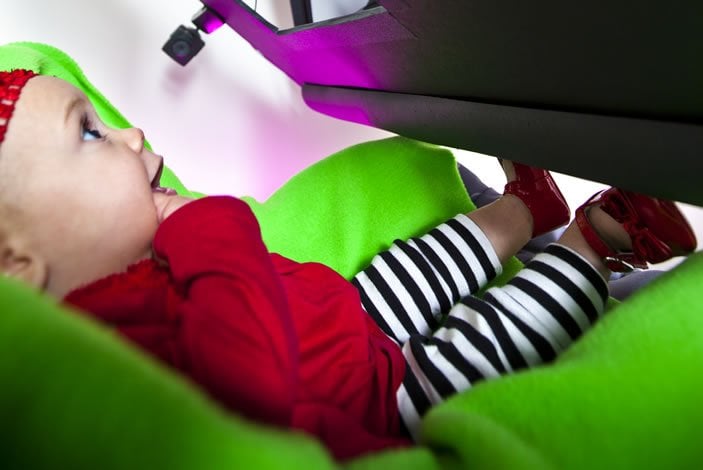 The researchers followed babies from birth until 3 years of age, using eye-tracking technology, to measure the way infants look at and respond to social cues. Credited to Emory University.
Home
Autism

Researchers at Marcus Autism Center, Children’s Healthcare of Atlanta and Emory University School of Medicine have identified signs of autism present in the first months of life. The researchers followed babies from birth until 3 years of age, using eye-tracking technology, to measure the way infants look at and respond to social cues. Infants later diagnosed with autism showed declining attention to the eyes of other people, from the age of 2 months onwards.

The results are reported in the Nov. 6, 2013 advanced online publication of the journal Nature.

The study followed two groups of infants, one at low and one at high risk for having autism spectrum disorders. High-risk infants had an older sibling already diagnosed with autism, increasing the infant’s risk of also having the condition by 20 fold. In contrast, low-risk infants had no first, second, or third degree relatives with autism.

“By following these babies from birth, and intensively within the first six months, we were able to collect large amounts of data long before overt symptoms are typically seen,” said Warren Jones, Ph.D., the lead author on the study. Teams of clinicians assessed the children longitudinally and confirmed their diagnostic outcomes at age 3. Then the researchers analyzed data from the infants’ first months to identify what factors separated those who received an autism diagnosis from those who did not. What they found was surprising.

“We found a steady decline in attention to other people’s eyes, from 2 until 24 months, in infants later diagnosed with autism,” said co-investigator Ami Klin, Ph.D., director of Marcus Autism Center. Differences were apparent even within the first 6 months, which has profound implications. “First, these results reveal that there are measurable and identifiable differences present already before 6 months. And second, we observed declining eye fixation over time, rather than an outright absence. Both these factors have the potential to dramatically shift the possibilities for future strategies of early intervention.”

The researchers caution that what they observed would not be visible to the naked eye, but requires specialized technology and repeated measurements of a child’s development over the course of months.

“To be sure, parents should not expect that this is something they could see without the aid of technology,” said Jones, “and they shouldn’t be concerned if an infant doesn’t happen to look at their eyes at every moment. We used very specialized technology to measure developmental differences, accruing over time, in the way that infants watched very specific scenes of social interaction.”

Before they can crawl or walk, babies explore the world intensively by looking at it, and they look at faces, bodies, and objects, as well as other people’s eyes. This exploration is a natural and necessary part of infant development, and it sets the stage for brain growth.

The critical implications of the study relate to what it reveals about the early development of social disability. Although the results indicate that attention to others’ eyes is already declining by 2 to 6 months in infants later diagnosed with autism, attention to others’ eyes does not appear to be entirely absent. If infants were identified at this early age, interventions could more successfully build on the levels of eye contact that are present. Eye contact plays a key role in social interaction and development, and in the study, those infants whose levels of eye contact diminished most rapidly were also those who were most disabled later in life. This early developmental difference also gives researchers a key insight for future studies.

“The genetics of autism have proven to be quite complex. Many hundreds of genes are likely to be involved, with each one playing a role in just a small fraction of cases, and contributing to risk in different ways in different individuals,” said Jones. “The current results reveal one way in which that genetic diversity may be converted into disability very early in life. Our next step will be to expand these studies with more children, and to combine our eye-tracking measures with measures of gene expression and brain growth.”

The study, Attention to Eyes is Present But In Decline in 2-6 Month-Olds Later Diagnosed with Autism was funded by the Simons Foundation, the National Institute of Mental Health, the Marcus Foundation and the Whitehead Foundation.