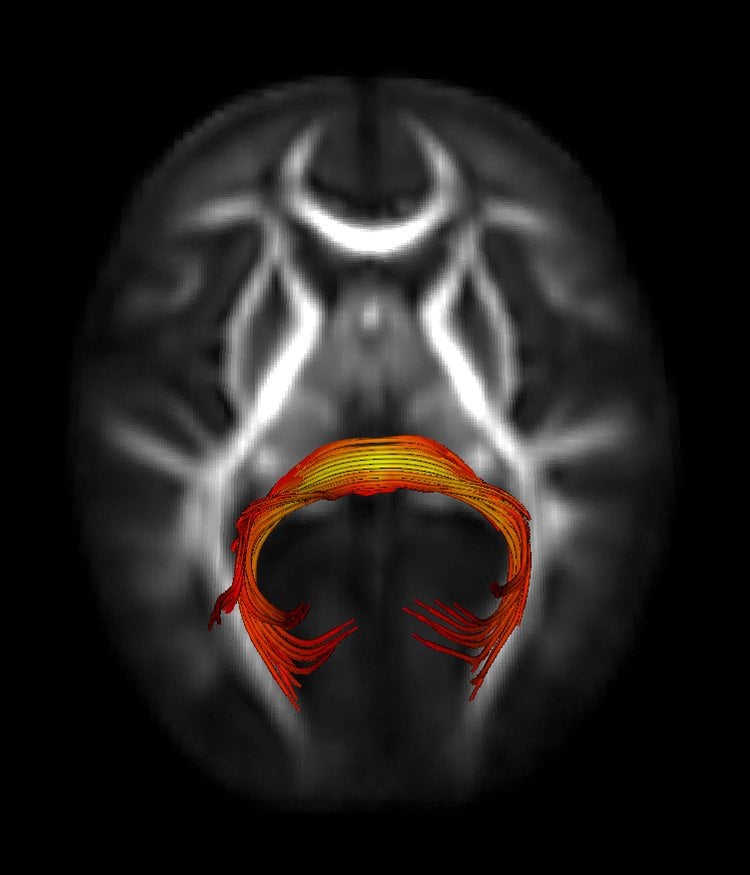 Splenium of the Corpus Callosum: White matter fiber bundle that supports visual orienting in typically developing infants and may be implicated in the early development of autism spectrum disorders. The image is credited to Jason Wolff, PhD of UNC.
Home
Autism

These findings suggest that 7-month-olds who go on to develop autism show subtle, yet overt, behavioral differences prior to the emergence of the disorder.

Infants at 7 months of age who go on to develop autism are slower to reorient their gaze and attention from one object to another when compared to 7-month-olds who do not develop autism, and this behavioral pattern is in part explained by atypical brain circuits.

Those are the findings of a new study led by University of North Carolina School of Medicine researchers and published online March 20 by the American Journal of Psychiatry.

“These findings suggest that 7-month-olds who go on to develop autism show subtle, yet overt, behavioral differences prior to the emergence of the disorder. They also implicate a specific neural circuit, the splenium of the corpus callosum, which may not be functioning as it does in typically developing infants, who show more rapid orienting to visual stimuli,” said Jed T. Elison, PhD, first author of the study.

Elison worked on the study, conducted as part of the Infant Brain Imaging Study (IBIS) Network, for his doctoral dissertation at UNC. He now is a postdoctoral fellow at the California Institute of Technology. The study’s senior author is Joseph Piven, MD, professor of psychiatry, director of the Carolina Institute for Developmental Disabilities at UNC, and the principle investigator of the IBIS Network.

“Difficulty in shifting gaze and attention that we found in 7-month-olds may be a fundamental problem in autism,” Piven said. “Our hope is that this finding may help lead us to early detection and interventions that could improve outcomes for individuals with autism and their families.”

For this study, infants participated in an eye-tracking test and a brain scan at 7 months of age a clinical assessment at 25 months of age.

The results showed that the high-risk infants later found to have ASD were slower to orient or shift their gaze (by approximately 50 miliseconds) than both high-risk-negative and low-risk infants. In addition, visual orienting ability in low-risk infants was uniquely associated with a specific neural circuit in the brain:  the splenium of the corpus callosum. This association was not found in infants later classified with ASD.

The study concluded that atypical visual orienting is an early feature of later emerging ASD and is associated with a deficit in a specific neural circuit in the brain.

Funding support for the study was provided by the National Institutes of Health, Autism Speaks and the Simons Foundation Autism Research Initiative.