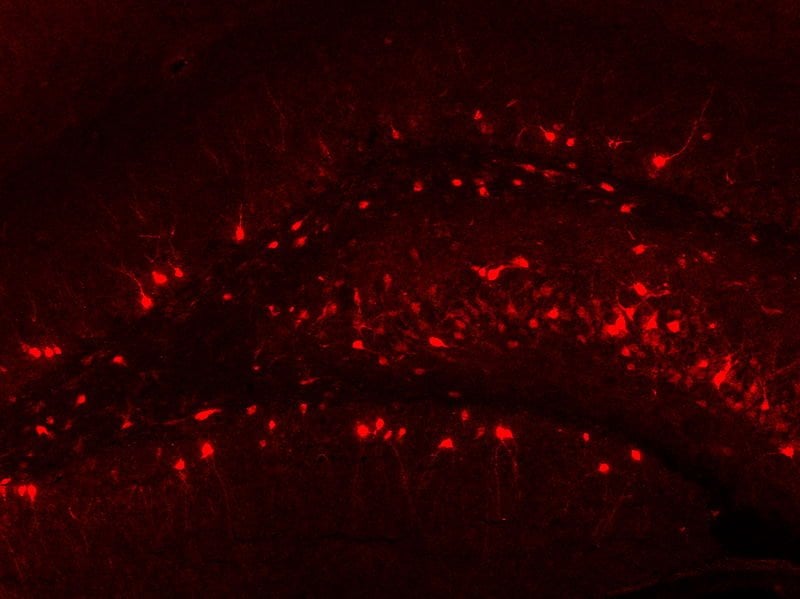 The researchers' experiments revealed that Arc acted as a master regulator of the entire homeostatic scaling process. During memory formation, certain genes must be switched on and off at very specific times in order to generate proteins that help neurons lay down new memories. The image is an arc immunohistochemical staining of a rat dentate gyrus. This is used for illustrative purposes and is not connected to the research.
Home
Featured

Scientists at the Gladstone Institutes have deciphered how a protein called Arc regulates the activity of neurons – providing much-needed clues into the brain’s ability to form long-lasting memories.

These findings, reported Sunday in Nature Neuroscience, also offer newfound understanding as to what goes on at the molecular level when this process becomes disrupted.

Led by Gladstone senior investigator Steve Finkbeiner, MD, PhD, this research delved deep into the inner workings of synapses. Synapses are the highly specialized junctions that process and transmit information between neurons. Most of the synapses our brain will ever have are formed during early brain development, but throughout our lifetimes these synapses can be made, broken and strengthened. Synapses that are more active become stronger, a process that is essential for forming new memories.

However, this process is also dangerous, as it can overstimulate the neurons and lead to epileptic seizures. It must therefore be kept in check.

Neuroscientists recently discovered one important mechanism that the brain uses to maintain this important balance: a process called “homeostatic scaling.” Homeostatic scaling allows individual neurons to strengthen the new synaptic connections they’ve made to form memories, while at the same time protecting the neurons from becoming overly excited. Exactly how the neurons pull this off has eluded researchers, but they suspected that the Arc protein played a key role.

“Scientists knew that Arc was involved in long-term memory, because mice lacking the Arc protein could learn new tasks, but failed to remember them the next day,” said Finkbeiner, who is also a professor of neurology and physiology at UC San Francisco, with which Gladstone is affiliated. “Because initial observations showed Arc accumulating at the synapses during learning, researchers thought that Arc’s presence at these synapses was driving the formation of long-lasting memories.”

But Finkbeiner and his team thought there was something else in play.

The Role of Arc in Homeostatic Scaling

In laboratory experiments, first in animal models and then in greater detail in the petri dish, the researchers tracked Arc’s movements. And what they found was surprising.

“When individual neurons are stimulated during learning, Arc begins to accumulate at the synapses – but what we discovered was that soon after, the majority of Arc gets shuttled into the nucleus,” said Erica Korb, PhD, the paper’s lead author who completed her graduate work at Gladstone and UCSF.

“A closer look revealed three regions within the Arc protein itself that direct its movements: one exports Arc from the nucleus, a second transports it into the nucleus, and a third keeps it there,” she said. “The presence of this complex and tightly regulated system is strong evidence that this process is biologically important.”

In fact, the team’s experiments revealed that Arc acted as a master regulator of the entire homeostatic scaling process. During memory formation, certain genes must be switched on and off at very specific times in order to generate proteins that help neurons lay down new memories. From inside the nucleus, the authors found that it was Arc that directed this process required for homeostatic scaling to occur. This strengthened the synaptic connections without overstimulating them – thus translating learning into long-term memories.

Implications for a Variety of Neurological Diseases

“This discovery is important not only because it solves a long-standing mystery on the role of Arc in long-term memory formation, but also gives new insight into the homeostatic scaling process itself – disruptions in which have already been implicated in a whole host of neurological diseases,” said Finkbeiner. “For example, scientists recently discovered that Arc is depleted in the hippocampus, the brain’s memory center, in Alzheimer’s disease patients. It’s possible that disruptions to the homeostatic scaling process may contribute to the learning and memory deficits seen in Alzheimer’s.”

Dysfunctions in Arc production and transport may also be a vital player in autism. For example, the genetic disorder Fragile X syndrome – a common cause of both mental retardation and autism, directly affects the production of Arc in neurons.

“In the future,” added Dr. Korb, “we hope further research into Arc’s role in human health and disease can provide even deeper insight into these and other disorders, and also lay the groundwork for new therapeutic strategies to fight them.”