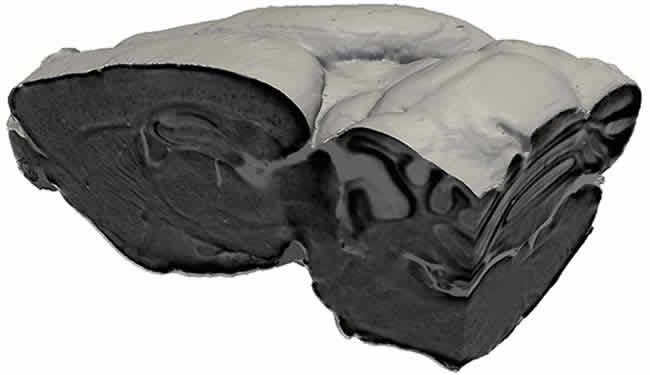 Alzheimer Plagues in 3d – Swiss researchers succeeded in generating detailed three-dimensional images of the spatial distribution of amyloid plaques in the brains of mice afflicted with Alzheimer’s disease.

These plaques are accumulations of small pieces of protein in the brain and are a typical characteristic of Alzheimer’s. The new technique used in the investigations provides an extremely precise research tool for a better understanding of the disease. In the future, scientists hope that it will also provide the basis for a new and reliable diagnosis method. The results were achieved within a joint project of two teams of researchers – one from the Paul Scherrer Institute (PSI) and ETH Zurich, the other from the École Polytechnique Fédérale de Lausanne (EPFL). They have been published in the journal Neuroimage.

Alzheimer’s disease is responsible for about 60% to 80% of all cases of dementia. This disease affects people differently, but the most common initial symptom is the difficulty in remembering new information, because the disease first affects brain regions involved in the formation of new memories. Alzheimer’s dementia is characterized by typical brain lesions that spread to other brain regions as the disease progresses.

One of these lesions, the so-called amyloid plaque, is composed of the accumulation of extracellular protein aggregates. These lesions appear early in the course of the disease and there is a high interest in detecting them in patients to diagnose or evaluate the progression of the disease. Recently, medical imaging methods have been developed and validated for this purpose. These allow regional amount of amyloid deposits to be measured, but individual plaques cannot be quantified.

The latest results from a team of researchers from the Paul Scherrer Institute (PSI) and the École Polytechnique Fédérale de Lausanne (EPFL) show that imaging single plaques is feasible under certain conditions. “This achievement could help to advance the development and evaluation of new imaging diagnostic markers for ultimately improving the diagnosis of Alzheimer’s disease,” explains Matthias Cacquevel, one of the authors at EPFL.

Using a method known as Phase Contrast Imaging, the researchers were able, within a short time, to make visible the exact three-dimensional distribution of amyloid plaques in the brains of mice with Alzheimer’s. Before this achievement, the only possibility of studying the distribution of amyloid plaques at the single-plaque level was to perform time-consuming studies.

“Until now, for such an investigation, the brain had to be cut into slices and the slices coloured so that the plaques became visible”, explains Bernd Pinzer, from the Paul Scherrer Institute, who carried out the investigations. “This process is the gold standard amongst such investigations. It is, however, very time-consuming, as everything has to be done by hand. At the same time, it provides much less information than our new method. Naturally, we compared the results from our new method with those obtained using this traditional method, and they showed excellent agreement.”

As a first concrete result, the researchers determined the distribution of plaques in the brains of a number of mice with different stages of the disease. For each brain, the scientists obtained a three-dimensional image of the overall plaque distribution so that the development of the disease could be followed in detail. With conventional processes, it would hardly have been possible to gather such comprehensive information.

“One goal is to use the phase contrast technique to help improve imaging methods which make visible the plaques in the brain of a living patient, and thereby allow a reliable diagnosis of Alzheimer’s disease to be made”, explains Pinzer. “These methods are under constant development and it is important to compare their results with those achieved using a known and reliable method. Now it will be possible to directly compare the two sets of 3D images of a mouse brain produced both by a diagnostic method and by our phase contrast technique. One of the diagnostic methods available is Positron Emission Tomography (PET), in which special molecules are attached to the plaques and, after some time, emit gamma radiation, which can be ascertained externally.”

Although the deposited radiation dose required – which is high, in order to generate the necessary high resolution – prevents measurements being made on living animals at the moment, the method is already an outstanding research tool, which will lead to a better understanding of Alzheimer’s disease. “This tool will allow much more precise studies on how amyloid plaques are distributed”, explains Matthias Cacquevel, one of the authors at EPFL. “The relationship between plaques and the symptoms of the disease are still unclear, and information on how these plaques spread throughout the brain is also missing.”

Comprehensive information from changes in the light

These investigations were carried out at the Swiss Light Source (SLS) at PSI. The SLS generates synchrotron light – X-rays that are very intensive and well focused. The investigation is similar to a conventional X-ray examination – the scientists pass the X-rays through the object under investigation and determine how they have changed on their way. A normal X-ray picture, however, only shows how strongly the light is attenuated by the object; in a sense, it shows the shadow of the object. The problem is that various kinds of soft tissue attenuate X-rays in approximately the same way, which makes it difficult to distinguish between them.

During Sleep, One Brain Region Teaches Another, Converting Novel Data Into Enduring Memories

“With the phase contrast method that we are using here, we also take into consideration the fact that different tissues deviate the light slightly from its original direction by a different amount. In physics, this effect is known to generate a so-called X-ray phase shift”, explains Marco Stampanoni, Professor of X-Ray Microscopy at the Institute of Biomedical Technology at the ETH Zürich and Project Manager at PSI. The team he is leading built up the measuring station and designed the experiment. “Our instrument is able to measure such subtle shifts very precisely and transform this information into understandable images.”

“While we cannot carry out an investigation on patients using the phase contrast method to detect Alzheimer’s disease, we are close to developing diagnostic tools for other diseases”, emphasises Stampanoni. “We have already shown, in a pilot study on the imaging of tumours in the female breast, how useful the additional information can be. A first step in the direction of the hospital is the development of a mammography facility, the first prototype of which can be used in a doctor’s practice.”