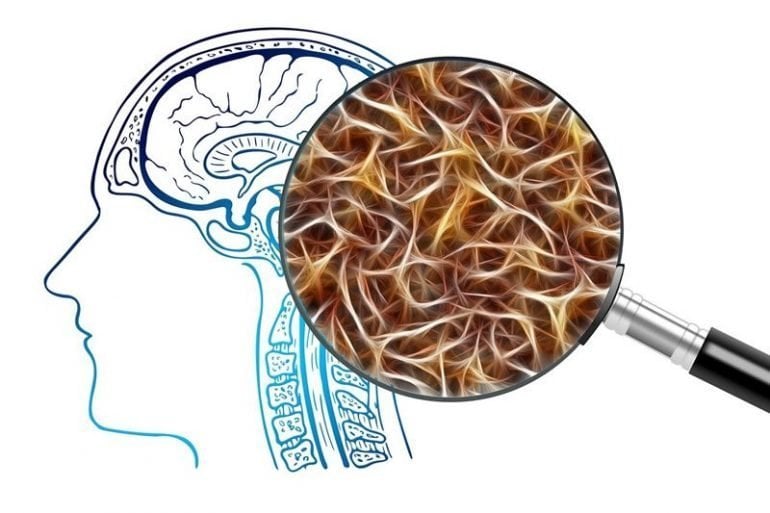 This new data will help improve efficiency of screening and enrollment of other trials designed to prevent Alzheimer's in people without symptoms. The image is in the public domain.

Summary: Findings support the hypothesis that higher levels of amyloid in the brain is an indicator of the early stages of Alzheimer’s disease.

The first published data from the Anti-Amyloid Treatment in Asymptomatic Alzheimer’s Disease (A4) study supports the hypothesis that higher levels of the amyloid protein in the brain represent an early stage of Alzheimer’s disease. Results of an analysis of participant screening data for the study, published April 6 in JAMA Neurology, also show that amyloid burden in clinically normal older adults is associated with a family history of disease, lower cognitive test scores, and reports of declines in daily cognitive function. Major funding was provided by the National Institute on Aging (NIA), part of the National Institutes of Health; all data is now freely available to the broader research community.

With completion expected in late 2022, the A4 study is an ongoing prevention trial launched in 2014 to test whether the drug solanezumab, a monoclonal antibody, could slow cognitive decline associated with elevated brain amyloid if started before clinical symptoms appear. Amyloid, long considered a hallmark of Alzheimer’s disease, has been the target of therapies in clinical trials in people who already show symptoms of the disease.

“A major issue for amyloid-targeting Alzheimer’s disease clinical trials, and one that is being addressed with the A4 study, is that previous trials may have been intervening too late in the disease process to be effective,” said NIA Director, Richard J. Hodes, M.D. “A4 is pioneering in the field because it targets amyloid accumulation in older adults at risk for developing dementia before the onset of symptoms.”

The A4 study team was looking for cognitively normal participants with high levels of amyloid. They started by pre-screening more than 15,000 people who expressed interest in the trial. Of those 15,000, the researchers brought in 6,763 clinical trial volunteers for cognitive testing, clinical assessments and genotyping. After excluding 2,277 participants for cognitive and/or medical reasons, researchers used amyloid positron emission tomography (PET) imaging with 4,486 participants to measure amyloid accumulation in the brain. The PET imaging revealed 1,323 with elevated amyloid levels who were eligible to continue in the A4 study.

“In 2014, A4 was a first-of-its-kind study because it used amyloid PET to identify cognitively normal people with high levels of brain amyloid,” said Laurie Ryan, Ph.D., chief of the Dementias of Aging branch in NIA’s Division of Neuroscience. “Before the availability of amyloid PET, other amyloid-targeting clinical trials may have been testing therapies in some people who didn’t have amyloid.”

Writing for the A4 study team, lead author Reisa A. Sperling, M.D., at Brigham and Women’s Hospital and Harvard Medical School, Boston, noted in the paper that the screening data of all 4,486 participants who had PET imaging is now available to the research community. This new data will help improve efficiency of screening and enrollment of other trials designed to prevent Alzheimer’s in people without symptoms.

“A4 demonstrates that prevention trials can enroll high risk individuals — people with biomarkers for Alzheimer’s who are cognitively normal,” said Ryan, adding, “Ultimately, precision medicine approaches will be essential.”

“Alzheimer’s disease is never going to have a one-size-fits-all treatment,” she said.

“We’re likely to need different treatments, even combinations of therapies, for different individuals based on their risk factors.”

NIA’s diverse Alzheimer’s disease and related dementias research portfolio includes about 230 clinical trials. Of these, more than 100 are focused on non-pharmacological interventions, including but not limited to diet, exercise and cognitive training. Of the current 46 pharmacological trials supported by NIA, most investigate targets other than amyloid, such as neuroprotection and inflammation.

Illicit Amphetamine Use Linked to 5-Fold Heightened Risk of Psychosis

Objective
To investigate the association of elevated amyloid with demographic and lifestyle factors, apolipoprotein E (APOE), neuropsychological testing, and self- and study partner reports of cognitive function.

Design, Setting, and Participants
This cross-sectional study included screening data in the Anti-Amyloid Treatment in Asymptomatic Alzheimer Disease (A4) Study collected from April 2014 to December 2017 and classified by amyloid status. Data were was analyzed from 2018 to 2019 across 67 sites in the US, Canada, Australia, and Japan and included 4486 older individuals (age 65-85 years) who were eligible for amyloid PET (clinically normal [Clinical Dementia Rating = 0] and cognitively unimpaired [Mini-Mental State Examination score, ≥25; logical memory IIa 6-18]).

Conclusions and Relevance
Among a large group of older individuals screening for an Alzheimer disease (AD) prevention trial, elevated brain amyloid was associated with family history and APOE ε4 allele but not with multiple other previously reported risk factors for AD. Elevated amyloid was associated with lower test performance results and increased reports of subtle recent declines in daily cognitive function. These results support the hypothesis that elevated amyloid represents an early stage in the Alzheimer continuum and demonstrate the feasibility of enrolling these high-risk participants in secondary prevention trials aimed at slowing cognitive decline during the preclinical stages of AD.