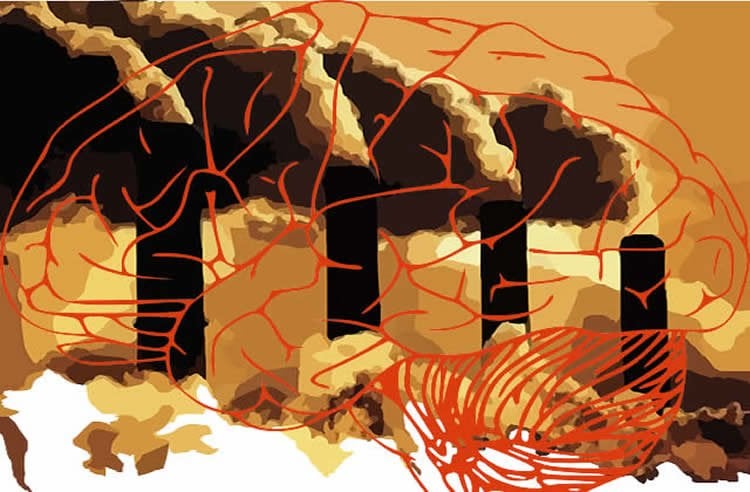 The study found when air particulate matter and their components such as metals are inhaled or swallowed, they pass through damaged barriers, including respiratory, gastrointestinal and the blood-brain barriers and can result in long-lasting harmful effects. The image is for illustrative purposes only. Credit NeuroscienceNews.

Pollution in many cities threatens the brain development in children.

Findings by University of Montana Professor Dr. Lilian Calderón-Garcidueñas, MA, MD, Ph.D., and her team of researchers reveal that children living in megacities are at increased risk for brain inflammation and neurodegenerative changes, including Alzheimer’s or Parkinson’s disease.

Calderón-Garcidueñas’ findings are detailed in a paper titled “Air pollution and children: Neural and tight junction antibodies and combustion metals, the role of barrier breakdown and brain immunity in neurodegeneration”.

The study found when air particulate matter and their components such as metals are inhaled or swallowed, they pass through damaged barriers, including respiratory, gastrointestinal and the blood-brain barriers and can result in long-lasting harmful effects.

Calderón-Garcidueñas and her team compared 58 serum and cerebrospinal fluid samples from a control group living in a low-pollution city and matched them by age, gender, socioeconomic status, education and education levels achieved by their parents to 81 children living in Mexico City.

The results found that the children living in Mexico City had significantly higher serum and cerebrospinal fluid levels of autoantibodies against key tight-junction and neural proteins, as well as combustion-related metals.

“We asked why a clinically healthy kid is making autoantibodies against their own brain components,” Calderón-Garcidueñas said. “That is indicative of damage to barriers that keep antigens and neurotoxins away from the brain. Brain autoantibodies are one of the features in the brains of people who have neuroinflammatory diseases like multiple sclerosis.”

The issue is important and relevant for one reason, she explained. The breakdown of the blood-brain barrier and the presence of autoantibodies to important brain proteins will contribute to the neuroinflammation observed in urban children and raises the question of what role air pollution plays in a 400 percent increase of MS cases in Mexico City, making it one of the main diagnoses for neurology referrals.

Calderón-Garcidueñas points out that there is a need for a longitudinal follow-up study to determine if there is a relationship between the cognition deficits and brain MRI alterations previously reported in Mexico City children, and their autoimmune responses. But what is clear is that the kids are suffering from immune dysregulation.

Once there is a breakdown in the blood-brain barrier, not only will particulate matter enter the body but it also opens the door to harmful neurotoxins, bacteria and viruses.

“The barriers are there for a reason,” she explains. “They are there to protect you, but once they are broken the expected results are not good.”

The results of constant exposure to air pollution and the constant damage to all barriers eventually result in significant consequences later in life. She explains that the autoimmune responses are potentially contributing to the neuroinflammatory and Alzheimer’s and Parkinson’s pathology they are observing in young urban children.

While the study focused on children living in Mexico City, others living in cities where there are alarming levels of air pollution such as Los Angeles, Philadelphia-Wilmington, New York City, Salt Lake City, Chicago, Tokyo, Mumbai, New Delhi or Shanghai, among others, also face major health risks. In the U.S. alone, 200 million people live in areas where pollutants such as ozone and fine particulate matter exceed the standards.

“Investing in defining the central nervous system pathology associated with exposure to air pollutants in children is of pressing importance for public health,” Calderón-Garcidueñas said.